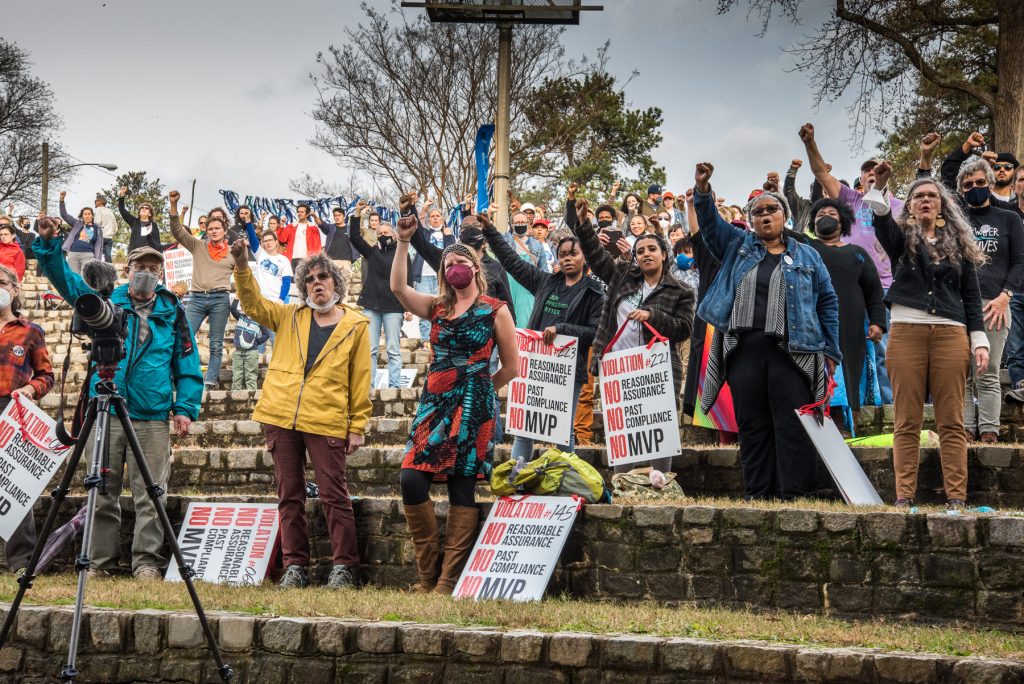 Pipeline opponents rallied during the Violation Vigil in Richmond on Dec. 11. Photo by Will Kerner Photography

UPDATED FEBRUARY 21, 2022: In a filing with the U.S. Securities and Exchange Commission, NextEra Energy Resources, which has a 31.9% ownership interest in Mountain Valley Pipeline said it was re-evaluating its investment after a series of legal and regulatory setbacks for the pipeline led the corporation to record an $800 million impairment charge in its first quarter report. NextEra said in the filing it has determined that those setbacks result in “a very low probability of pipeline completion.”

Prospects for the future of the Mountain Valley Pipeline are grim for the company and its investors after recent decisions by judges at the federal level and by the U.S. Army Corps of Engineers.

Earlier this month, a three-judge panel of the U.S. Court of Appeals for the 4th Circuit stopped MVP from crossing a section of the Jefferson National Forest. The court ruled that the Bureau of Land Management and the U.S. Forest Service had failed to adequately consider the real sedimentation and erosion impacts from the construction of the pipeline and willfully ignored the Forest Service’s own internal requirements set out in a 2012 planning rule. This is the second time MVP has lost the ability to cross through Jefferson National Forest.

One week later, the same panel of judges ruled that the U.S. Fish and Wildlife Service did not ensure that endangered species would be protected from the MVP. The court invalidated the agency’s biological opinion and incidental take statement, two additional authorizations that MVP needs in order to harm protected habitats. The court ruled that the agency failed to assess the impacts from the pipeline, including climate change, to the only known habitat of the candy darter, which the Fish and Wildlife Service lists as an endangered species.

The pipeline would also run through the habitats for other threatened and endangered species, like the Roanoke logperch and the Indiana bat.

Both of these decisions from the 4th Circuit Court of Appeals resulted from legal challenges brought by Sierra Club and Appalachian Mountain Advocates on behalf of many environmental groups, including Appalachian Voices.

“Once again, the courts have found that federal regulators weren’t following the laws passed by Congress to protect the public and our environment,” Peter Anderson, Virginia policy director for Appalachian Voices, said in a press statement following the endangered species ruling. “Communities in this region rely on its rich biodiversity to support many recreational and economic opportunities. We take seriously our laws protecting habitat and ecological function, even if Mountain Valley Pipeline does not.” 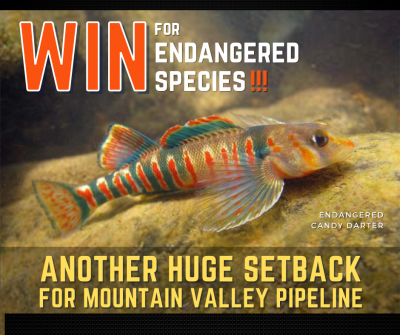 Because these federal authorizations have been struck down, the U.S. Army Corps of Engineers confirmed they would be unable to issue a U.S. Clean Water Act Section 404 certification for the Mountain Valley Pipeline, which is required for construction, until these authorizations are back in place.

These decisions are a major blow to the viability of this project, which is already several years behind schedule. It was originally slated for 2018, but will definitely miss its most recently recalculated in-service date of summer 2022. The court identified major flaws in the methods the agency used to grant the now-vacated approvals.

“In effect, the Fish and Wildlife Service is attempting to pass off its summary of range-wide conditions and threats as an action-area analysis. But these models simply do not do what the agency claims,” said Judge James Wynn during the ruling.

It is unclear how quickly — or whether — the federal agencies behind the invalidated permits will be able to reissue their authorizations with the stricter standards of evidence the court is asking for.

Opponents of MVP have shared concerns about the dangers of building this massive pipeline through such a sensitive natural area that led to the courts’ decisions since the pipeline’s inception in 2016.

“If MVP is unfit for the protected Jefferson National Forest, it is unfit for our waters, our land, and our communities, full stop,” Russell Chisholm, co-chair of the Protect Our Water, Heritage, Rights (POWHR) Coalition, said following the national forest decision.

Although MVP received state-level water quality authorizations from Virginia and West Virginia at the end of December, it is unclear whether these permits will survive legal challenges any better than the federal authorizations.

The Virginia Department of Environmental Quality, which recommended that the project be given its water quality permit, ignored the unavoidable stream degradation that will occur if the project continues and downplayed the several hundred water quality violations that have occurred during construction so far. 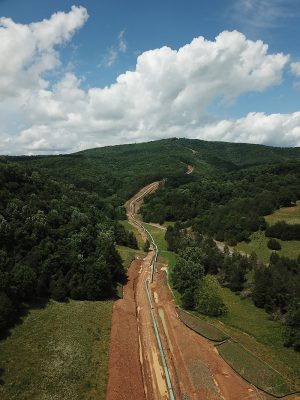 This pipeline will likely face scrutiny from investors at a 2021 end-of-year earnings report during a Feb. 22 shareholder meeting for the primary equity holder behind the project, Equitrans Midstream (ETRN). Analysts predict Equitrans Midstream may report an entire year of decline in earnings.

The last time the Mountain Valley Pipeline lost its biological opinion authorization from the Fish and Wildlife Service, the Federal Energy Regulatory Commission issued a stop work order. Appalachian Mountain Advocates made a similar request from FERC this time around.

Given the trend of other federal agencies’ decisions, it wouldn’t be surprising if the Federal Energy Regulatory Commission decided at its next meeting on March 24 to deny the pending amendment request by Mountain Valley Pipeline, which would allow the company to bore under 47 wetlands and 136 streams.

All of these delays and uncertainties add to the ballooning cost of the project, which had increased to an estimated $6.2 billion before the federal authorizations were overturned. Conservatively, this cost could rise several hundred million dollars more even if MVP is able to get all of their permits back in place over the coming year — or longer.

In order to recoup these costs, MVP will need to charge much more for the gas it delivers through the pipeline, making it hard to compete with Transco Williams, the majority supplier of gas to the region, which continues to increase availability through modifications to its existing infrastructure.

Even if everything could fall into place for MVP moving forward — which does not seem likely — investors might be asking themselves if it would even be worth the effort, aggravation and cost, much less the irreversible damage to the environment and communities along the pipeline’s path.