Opponents of the compressor station plan to gather at the agriculture complex.

Beginning on Dec. 2 at 1 p.m., the State Air Pollution Control Board will consider an air quality permit for the Lambert Compressor Station proposed for Pittsylvania County at a thrice-delayed public hearing in Chatham, Virginia. The hearing will continue on Dec. 3 at 9:30 a.m.

The hearing will take place at the Olde Dominion Agriculture Complex Education and Conference Center.

Jones noted that Banister District is predominantly African-American. She lives on a farm near the site of the proposed compressor station with her husband Anderson, who spoke during the meeting about the farm that’s been in his family for 98 years.

“The Jones family farm is one of the beautiful areas in Chatham,” he said. “We used to have cows, hogs, chickens. We had fruit trees. We had a wonderful farm and the land was very fertile. The pipelines have come in and destroyed the beautiful landscape. You just need to look at what they have done to it.”

Only people who submitted public comments during the original comment period earlier this year will be allowed to speak at the public hearing. DEQ said there are plans to livestream the meeting, but those details have yet to be released.

The in-person hearing was originally scheduled for July 7 in Richmond — a decision that was reversed after a fierce backlash. The Pittsylvania County Branch of the NAACP urged the board to either add a virtual option for attending the meeting or move it to Pittsylvania County.

“Our members and others from Southern Virginia are facing a 300-mile, 6-hour round trip, and a 1- or 2-night stay in order to attend the meeting,” wrote President Anita Royston in a letter to DEQ. “Given the current set-up, we can only speak — and listen — if we make the trip.”

The hearing was postponed to September, then October and finally pushed back again to Dec. 2. With the Delta surge in COVID-19 cases only beginning to decline, the lack of a virtual option for speakers remains troublesome. 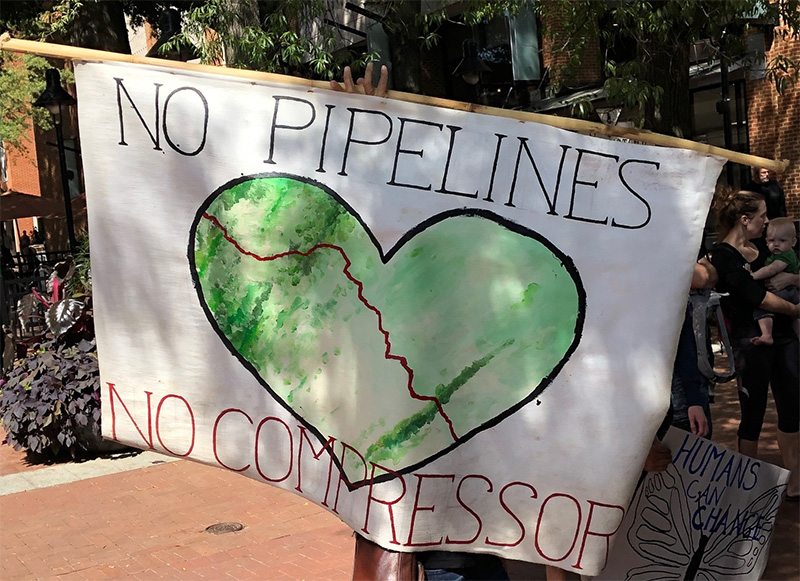 “By not allowing a hybrid hearing format, DEQ is failing to protect citizens’ right to engage in important governance decisions that affect their community,” said Jessica Sims, Virginia Field Coordinator for Appalachian Voices. “Throughout the public comment period, the public raised serious concerns with this misguided project, including that environmental justice issues were not properly addressed and community engagement was lacking.”

DEQ has received hundreds of comments from people opposed granting the air permit, including a letter from 16 members of the Virginia General Assembly asking DEQ to deny the permit.

“As reflected in over 300 submissions from the public regarding the project application, including comments from technical and health experts, the Compressor Station would have disproportionate adverse impacts on the affected community,” wrote the legislators. “Members of that same community indicated they did not receive timely notice of the project, nor receive authentic outreach. As meaningful engagement with impacted communities is a foundational aspect of the Virginia Environmental Justice Act, we are especially concerned.”

Read more about the proposed Lambert Compressor Station in The Appalachian Voice.

Dan is Appalachian Voice's Media Specialist. Previously, he worked as an opinion journalist for newspapers in Illinois, West Virginia, Florida and Virginia, and then as a communications consultant for a number of environmental nonprofit organizations.