Congress must pass the Build Back Better Act to invest in workers, families and clean energy

UPDATE: On Friday, Nov. 19, the U.S. House passed the Build Back Better Act, which if passed by the U.S. Senate, would bring groundbreaking investments in clean energy, funding for rural electric cooperatives, and an extension of the black lung excise tax.

Congress has passed the Infrastructure Investment and Jobs Act, which includes the reauthorization of the Abandoned Mine Land (AML) Program and the largest-ever investment in abandoned coal mine cleanup!

In the 40-year history of the program, only $6 billion has been distributed to states and tribes for AML cleanup. This bill includes an $11.3 billion boost to the program — it will dramatically expand what is possible for reclaiming mine sites abandoned decades ago, and will create thousands of jobs in the process. 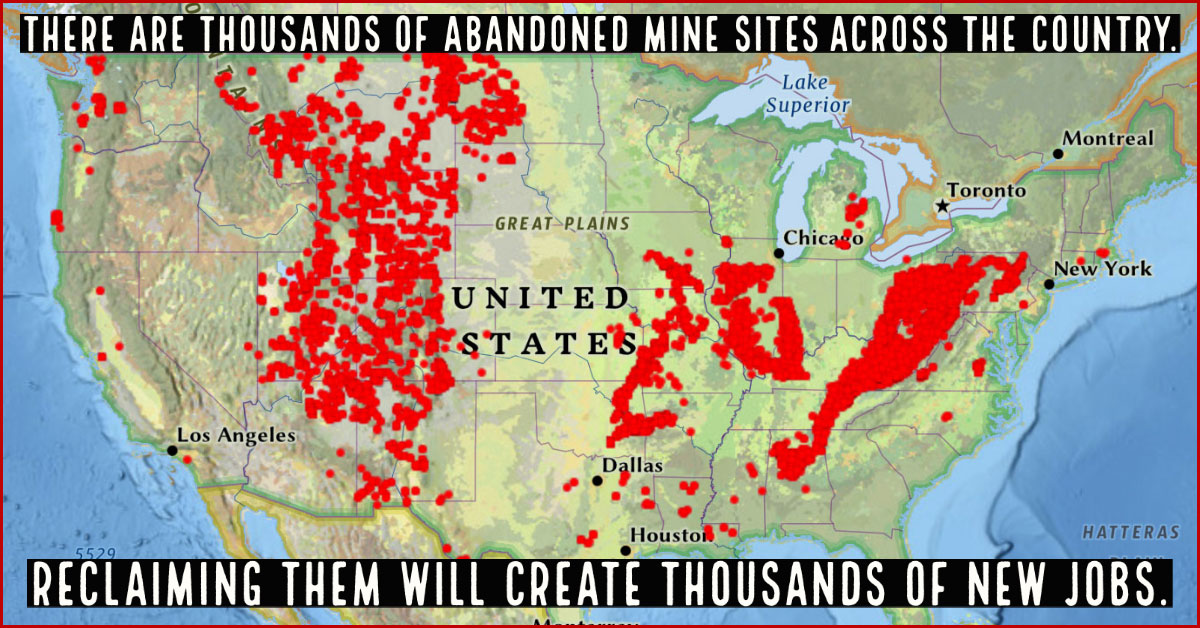 In addition to this significant boost to cleaning up dangerous and polluting abandoned mine lands, the bill will have major impacts for Appalachia by creating jobs, repairing infrastructure, building out broadband, and expanding access to clean water.

“Reauthorization of the AML Program has broad support from communities and local governments across Appalachia,” said Erin Savage, Senior Program Manager for Appalachian Voices. “We are grateful that Congress has listened to communities that have been dealing with abandoned mine sites for decades. This influx of funding will go a long way toward addressing remaining abandoned mines, and providing investments in the coal-bearing regions that have powered our country for over a century.”

Thank your members of Congress for investing in abandoned mine land cleanup and urge the Senate to pass the Build Back Better Act!

The $11.3 billion will be distributed to states and tribes over 15 years, based on historic coal production. West Virginia, Kentucky, Virginia, and Tennessee will all see increased annual funding, as will most other coal-producing states across the country. This increased funding will result in nearly 3,000 jobs and $7.45 billion in economic output across West Virginia, Ohio, and Virginia, according to analysis by the Reclaiming Appalachia Coalition.

“This will be a major boom to local economies in our region,” said Lyndsay Tarus of The Alliance for Appalachia. “This funding for the AML program means thousands of jobs to clean up environmental hazards, and it will lay the foundation for countless jobs in future thriving economies.”

Click to see details on each site. Map by Matt Helpler, data from OSMRE e-AMLIS inventory.

The AML Program was created through the Surface Mining Control and Reclamation Act (SMCRA) of 1977 to provide a way to clean up mines abandoned prior to passage of the Act. Under SMCRA, coal companies must pay a small fee on each ton of coal mined to finance the AML Program, which is overseen by the federal Office of Surface Mining, Reclamation and Enforcement (OSMRE), and implemented by a combination of state agencies and OSMRE. The Infrastructure Investment and Jobs Act reauthorized that fee at 80% of its previous rate for the next 13 years.

To date, the AML program has eliminated over 46,000 open mine portals, reclaimed more than 1,000 miles of dangerous highwall (sheer cliffs left behind after strip-mining operations), and restored water quality in countless coalfield communities. 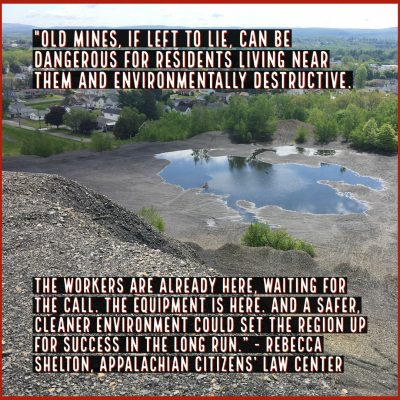 These projects have made tangible improvements in public health and safety across the 23 states and numerous tribal lands where coal mining has occurred, but many more impacts of past mining remain unaddressed. An inventory of Abandoned Mine Land impacts maintained by OSMRE estimates that over $11 billion is needed to clean up the remaining AML sites, while an independent analysis by the Ohio River Valley Institute puts that figure at closer to $20 billion or more.

Appalachian Voices has been a vocal proponent of shoring up funding for the AML program for many years, working with local governments to pass resolutions of support, lobbying Congress on the issue alongside community partners, and creating educational resources for policy-makers and the general public. (Check out this video to learn more about the AML program!)

What’s next for abandoned mine lands and unreclaimed modern mines?

Along with The Alliance for Appalachia, Reclaiming Appalachia Coalition, and other local, regional and national partners, we are now analyzing the bill language to ensure that this historic investment is as impactful as possible. Priorities for continued implementation of the AML program include:

Looking forward, Appalachian Voices is working to push for policy solutions to the $7.8 – 9.5 billion of outstanding environmental cleanup liability on modern-era mines, which are not eligible for funds under the Abandoned Mine Land program. Recommendations to regulators and policy-makers on that matter are detailed in a report published by Appalachian Voices earlier this year. If and when these similar but distinct issues on modern-era mines are finally addressed, it will likewise create a boom in jobs, and lasting improvements in public health and safety across the region.

President Biden signed the Infrastructure Investment and Jobs Act on Nov. 15. However, much more is needed to invest in communities and ensure a healthy environment and a robust, resilient economy for the Appalachian region.

Towards that end, advocates are working hard to get the Build Back Better Act passed in the Senate. This legislation includes an impressive suite of measures that would support working families, invest in clean energy, and pay for it all by asking the extremely wealthy to pay their fair share of taxes.

Take action! Thank your members of Congress for investing in abandoned mine land cleanup and urge them to pass the Build Back Better Act!

Together, these two bills are a once-in-a-generation chance to respond to the climate crisis and spiraling economic hardships, while repairing our nation’s infrastructure, cleaning up dangerous pollution, and jumpstarting our clean energy future.

“We applaud our region’s champions in Congress who have worked closely with Appalachian groups to hear about our region’s priorities and the investments we want to see,” said Chelsea Barnes, Legislative Director with Appalachian Voices. “We are looking forward to working with the Senate to get the Build Back Better Act over the finish line.”

Erin Savage and Dana Kuhnline contributed to this blog. This blog was updated November 19 to reflect the fact that President Biden signed the Infrastructure Investment and Jobs Act and that the U.S. House passed the Build Back Better Act. 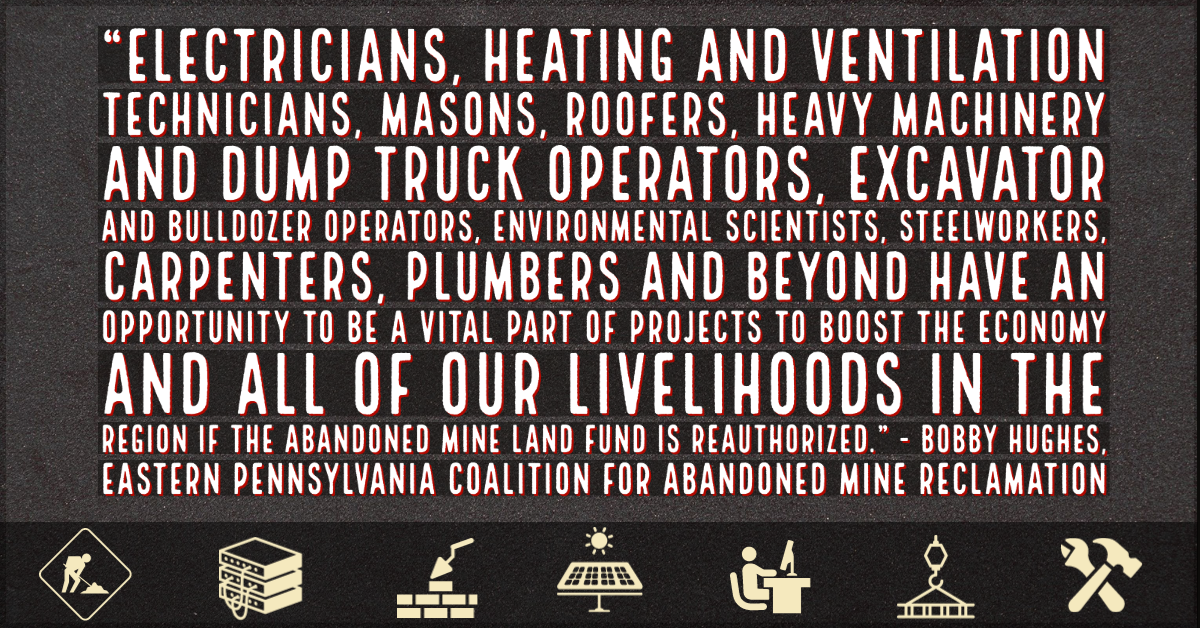