A bond forfeiture, unpaid fines, and a no-show: one month in the life of a Jim Justice family coal mine 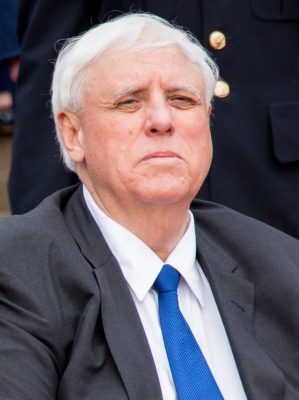 West Virginia Governor Jim Justice at his 2017 inauguration. He was re-elected in 2020. Public domain photo.

After years of environmental problems, the state of Virginia has revoked the mining permit for a coal mine that is owned by the family of West Virginia Governor Jim Justice.

On June 9, the Virginia Department of Mines Minerals and Energy (DMME) announced a public hearing to review the agency’s determination of bond forfeiture for Black River Coal’s War Creek Deep Mine. This comes after a year-and-a-half-long flurry of enforcement actions by DMME, as well as a series of administrative challenges to those actions by the company.

Since March, Roanoke attorney Hunter Naff has represented the notorious coal company in several informal hearings with DMME, held via conference call, in order to ask regulators for fine reductions. For the most part, DMME has affirmed its initial assessments of these civil penalties, which were often already set at the lowest allowable levels.

On June 28, Black River Coal failed to pay $63,000 in fines that was due to DMME, which will now result in the agency placing a lien on the company’s assets in Tazewell County, where the War Creek Mine is located.

When a coal company applies for a mine permit, they are required by state and federal law to post a bond that is intended to cover the cost of mine reclamation, or cleanup, if the company goes bankrupt or otherwise fails to reclaim the site in a timely manner and in accordance with environmental regulations.

If a company fails to keep their end of the bargain, the state mining agency can compel the company to forfeit their bond so that the state can use the bond amount to do the cleanup themselves. However, this system is rife with problems including insufficient bond amounts, and structurally inadequate bonding mechanisms called pool bonds and self bonds.

The very next day on June 29, neither Naff, nor any other agent of the Justice family’s enterprise called into a teleconference reviewing a different set of fines levied against the company. DMME attempted to contact him before starting the meeting but was unable to reach him. Two representatives of Appalachian Voices, the nonprofit group that publishes this blog, were present for that virtual conference, where DMME personnel discussed the War Creek mine’s latest violations and the additional $50,000+ in civil penalties the company owes the state of Virginia as a result.

Like many of the Justice family’s mining operations, the War Creek Deep Mine has a long history of violations — it has accrued 44 of them since Black River Coal acquired the mine in 2013.

In fact, the DMME’s revocation of this permit, and initial move towards bond forfeiture, occurred in January of 2020. That action was the consequence of Black River Coal missing compliance deadlines and failing to pay fines related to the leaching of toxic-forming material into surface water and groundwater, and from allowing an open pit connected to multiple mine portals to become flooded, presenting a hazard to nearby residents and resulting in unpermitted discharges of mine water into Indian Creek. At that juncture, the state ultimately chose not to follow through with bond forfeiture, as the company began to take remediative steps to address the violations.

But here we are again. More than a year later, the War Creek Mine remains in violation of numerous regulations, and the same hazards to the public and the environment that triggered permit revocation 18 months ago remain.

In addition to the determination of bond forfeiture, and the numerous citations that DMME has issued against the mine in recent months, the War Creek Mine is also out of compliance with an October 2020 Consent Order agreed upon by the Virginia Department of Environmental Quality (DEQ), and Blackstone Energy, Black River Coal’s parent company within the sprawling corporate empire of Jim Justice and his immediate family. This consent order spells out the timeline by which the company agreed to fully excavate and properly dispose of soil that had become contaminated by the same leaks of toxic-forming materials that, among other violations, led to DMME’s determination of bond forfeiture.

By April of this year, the company had fallen behind on remediating the site as required by the consent order. On April 30, DEQ sent Blackstone Energy a letter asking for an update and projections for when cleanup milestones would be complete. To date, the company has not responded to this request or had any other contact with DEQ on the matter, according to a DEQ representative.

This well-established pattern of negligence at the War Creek Mine may seem shocking, and it is, but it’s truly just a drop in the bucket when it comes to the conduct of the Justice family’s businesses. In just the past few months, an insurance provider has sued one Justice company for $166,000 in nonpayment on workers comp claims; a judge has ruled that Justice owes $6.8 million to a coal exporter in Pennsylvania for failing to deliver coal that had already been paid for; and most recently, the Wall Street Journal reports that the Republican governor is personally responsible for $700 million in loans, a revelation Justice has responded to by filing a lawsuit blaming a long-time financial backer for somehow causing the infamous “deadbeat billionaire” to default on his loans.

For years now, it has been widely understood that the standard operating procedure of Jim Justice, his family, and their companies is to shirk all responsibilities to workers, the environment, communities, vendors, lenders, and government agencies; ignore consequences whenever possible; and lash out when cornered. What’s the end game of all this? One might fear and expect that it is the same as it is for many other modern robber-barons: file bankruptcy, walk away with stuffed pockets, and leave everyone else to deal with the fallout.

Regarding the bond forfeiture on the War Creek mine, the DMME has scheduled a teleconference for 8 a.m. on July 28. We’ll see if any of Justice’s attorneys manage to make it to the phone.