When a Jewish congregation in Charleston, West Virginia, moved its daily services online at the onset of the pandemic, the rabbi was not sure what to expect. To Rabbi Victor Urecki’s complete surprise, the congregation’s membership grew.

“People from Illinois, Texas, California and Florida are logging on every night to be a part of our community,” says Urecki, who has been the rabbi of Congregation B’nai Jacob in Charleston for the past 35 years. “These are people who moved away and people’s children who have moved away but never found a temple or synagogue that felt like home. This is their home.” 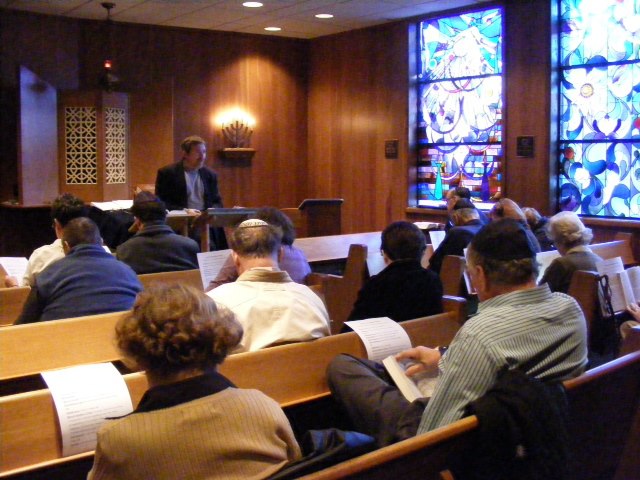 For the first time in many years, families are now able to spend significant services together, even when they are not in the same place.


“There is a yahrzeit [a Yiddish word meaning ‘anniversary of a death’] coming up and now three or four generations of a family are able to log on from all over the country to be together,” says Urecki. “This may have never happened before because maybe only one person from the family still lives locally.”

Though Charleston is known for many things, including a history tied to coal mining, beautiful mountain scenery and pepperoni rolls, the city’s vibrant Jewish history comes as a surprise to some.

Congregation B’nai Jacob sits on the corner of the tree-lined Virginia and Elizabeth streets, just two blocks from the Kanawha River that splits the city in two. While they have met there since 1948, the congregation, and the city’s Jewish community, is much older. There are tombstones in the cemetery for Jews with dates reaching back to 1806 and Congregation B’nai Jacob was chartered in 1894. 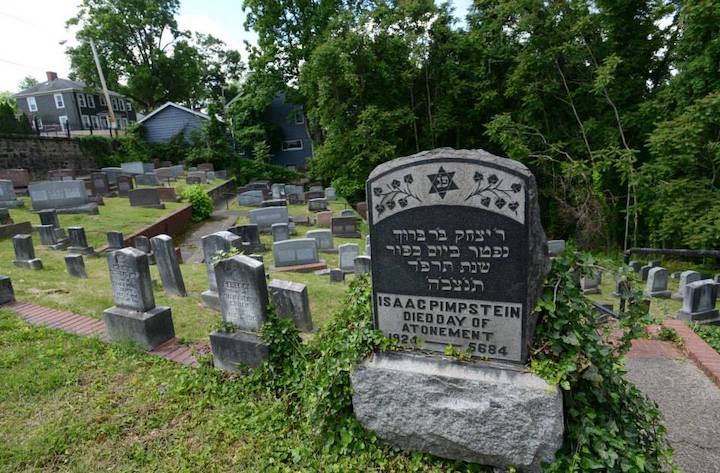 The B’nai Jacob Cemetery in Charleston’s South Hills neighborhood has been maintained since about 1894. Photo by Debbie Hill

“The Jewish community was growing in the early 1900s and continued to grow as more and more people started immigrating to the USA,” says Urecki, adding, “Many were coming to West Virginia to support the coal mining activities.”

Rabbi Joe Blair serves Temple Israel, a Reform Jewish community in Charleston, West Virginia, and has led the congregation for the past three years. Blair describes the 1930s to 1960s as the peak in Charleston Jewry.

“Charleston was a great destination for Jews because of the river, transport, trains, roads, etc.,” he says. “There was also major mineral activity like iron, copper, salt.” The Schoenbaum family, who founded the Shoney’s restaurant chain in 1947, were members of Temple Israel.

Urecki agrees that the 1960s were a heyday for Charleston’s Jewish population. “We had huge Sunday schools and a dozen basketball teams,” says Urecki. “There were bar mitzvahs [Bar mitzvah is a Jewish coming of age ritual for boys, bat mitzvah is the equivalent for girls] every single week.”

At one time, there were Jewish communities all over West Virginia. “There were thriving communities in Charleston, Huntington, Bluefield, Williamson and others,” says Urecki. 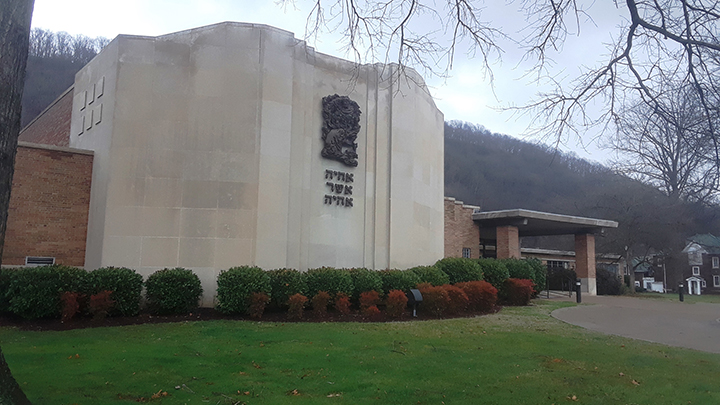 Temple Israel’s current home in Charleston, West Virginia, was built in 1960. The congregation began informally in 1856 and was legally chartered in 1873. Photo by Gregory S. Proctor

However, the city’s population began to decline in the late 1960s as automation led coal companies to reduce the size of their workforce. The trend has continued in recent years; between 2010 and 2019, Charleston’s population declined by 9.4%.

“Many people, Jewish families included, moved away,” says Urecki. “Children became educated and instead of working as merchants, they became doctors, lawyers or accountants and they started going elsewhere around the country. This was reflective of the larger Jewish population in general.”

Urecki and Blair estimate that there are between 200 to 250 Jewish families living in Charleston today. “A lot of people have the notion that it must be tough to be Jewish in Appalachia,” says Urecki. “But that’s not the case, at least not here in Charleston. The Jewish community has a strong presence and we are well respected.”

He says there are many interfaith activities, like interfaith seders and mixed-faith attendance at bar and bat mitzvot. “People ask if they can come to a service; they want to be invited,” says Urecki. “Whenever we do a social activity, we have just as many non-Jews as we do Jews. 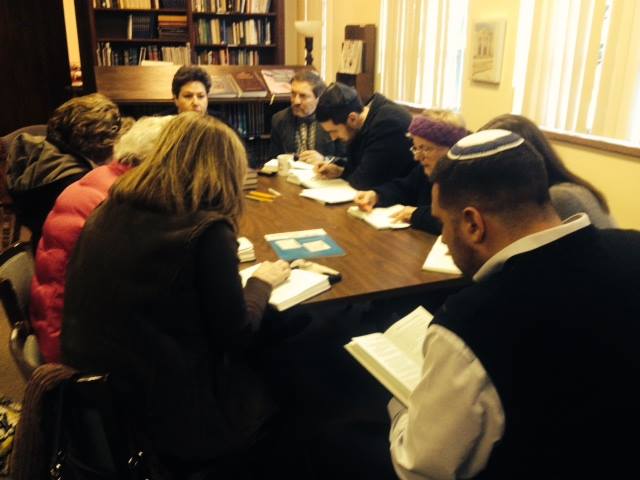 A Wednesday night class on the Jewish prayerbook meets prior to the pandemic. Photo courtesy of Congregation B’nai Jacob

One afternoon in March, Urecki was teaching a virtual Torah class that had 14 students total, and six of them weren’t Jewish. “What we have is an ability to share our traditions,” he says. The Charleston Library even has its annual fundraiser at Temple Israel because it’s bigger than the library.

Congregation B’nai Jacob is the only traditional synagogue in West Virginia that maintains daily services all in Hebrew, and Urecki says that many from the Christian communities want to see and experience some of the Jewish traditions.

“Because we’re such a small community, we stick together,” he says.”There’s a connection to each other that you don’t always find in larger communities.”

Even with the slow decline in population, Congregation B’nai Jacob and Temple Israel have been able to sustain themselves. “We’ve had astonishing leadership from well-established rabbis,” says Urecki. The last rabbi at B’nai Jacob served for 49 years. “Both congregations were financially sound and did what was necessary to survive,” he says.

They have even been able to avoid merging, like other Jewish communities in West Virginia have had to do. Even though the population has decreased, Congregation B’nai Jacob has been able to maintain daily services and a Saturday morning service. Temple Israel provides a Friday night service. 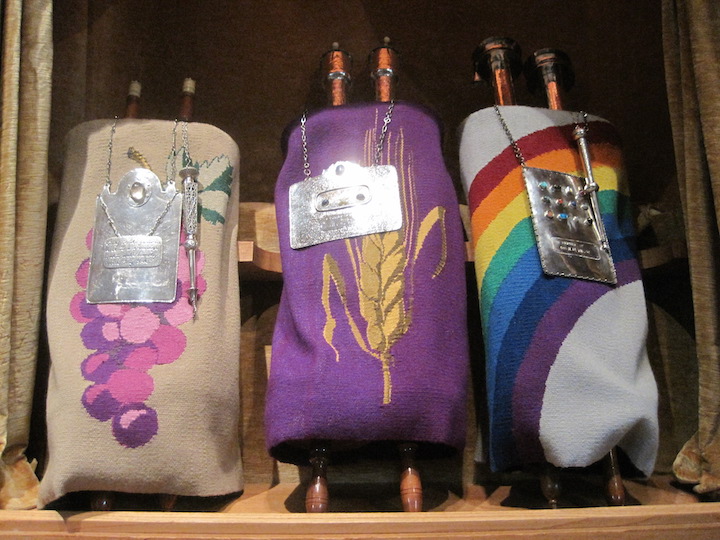 Torah scrolls are housed in the ark at Temple Israel. Photo by Gregory S. Proctor

While Urecki is happy for the growth in membership brought on by virtual attendance, he’s uncertain about the future of the Jewish community in Charleston. “There are factors beyond our control,” he says. “West Virginia isn’t doing the things economically or politically that’s going to bring a new generation to West Virginia, unfortunately.”

Like Urecki, Blair doesn’t see a renaissance in the Jewish population in Charleston in the near future due to lack of industry and general economic stagnation. “It’s been this way for a long time,” he says. “Children leave to study and find better opportunities elsewhere and they don’t come back.”

For now, Urecki is enjoying his congregation’s increased membership and the chance for congregants to catch up with old friends. The congregation is now offering blended services with the option to attend in person and online. Where before Urecki worried that they wouldn’t have the required 10 Jews to make a minyan [the quorum of 10 Jewish adults required for certain religious obligations], they now have more than 20 people during the daily services.

“Maybe this blended Zoom service is going to be the actual survival of small communities,” says Urecki. “This is awesome.”