The past few months have been active ones in the world of coal mine land reclamation and the economic transition in coal-impacted communities, with legislation moving through Congress to support mine cleanup and bolster coal communities and new and forthcoming reports from the Ohio River Valley Institute, Appalachian Voices and the Reclaiming Appalachia Coalition detailing the state of the Abandoned Mine Land Pilot Fund, opportunities for reclamation jobs in the Ohio River Valley, and the threat of coal company bankruptcies. There are also exciting new economic development projects underway in Southwest Virginia and Kentucky.

Here is a roundup of coal mine land reclamation and transition-related news:

While there are many coal mines in need of reclamation, the term “abandoned mine lands” specifically refers to mines and mine sites, like old coal processing plants, that were abandoned before the 1977 federal surface mining law went into effect.

The 1977 Surface Mine Control and Reclamation Act established a fee on coal production to fund cleanup of the existing AML problems. But there are still thousands of AML sites around the country that pose safety and environmental hazards and need to be cleaned up.

Two bills, introduced in the House in March and in the Senate in April, could pack a punch for mine land cleanup and economic revitalization in coal communities. The RECLAIM Act (H.R. 1733/S. 1455), introduced by Representatives Cartwright (D-Penn.) and Thompson (R-Penn.) in the House and Senator Manchin (D-W.Va.) in the Senate, would distribute more than $1 billion from the AML Fund to coal communities over the next five years, while the bill to reauthorize the Abandoned Mine Lands Program (H.R. 1734/S. 1447) would extend the fee—set to expire this year—that coal companies pay to create a fund for reclamation, ensuring that funding will be available for AML reclamation for the next 15 years. 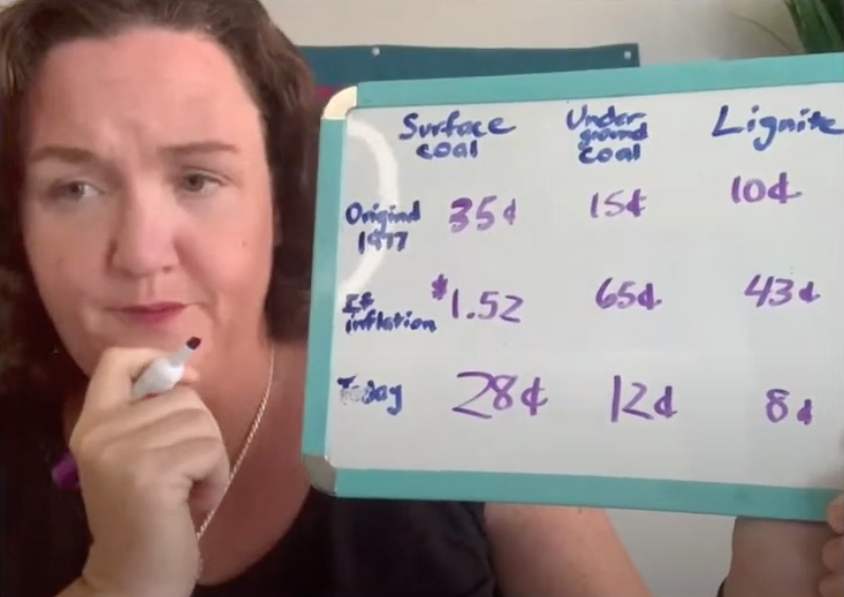 During the House Natural Resources hearing on abandoned mine legislation in March, Rep. Katie Porter pointed out that the current AML fees are just 18% of what they would be if the fees Congress set in 1977 were adjusted for inflation. Despite this, in April Rep. Liz Cheney introduced a bill that would slash the fee even further. Read more from Rebecca Shelton of Appalachian Citizens’ Law Center about why Cheney’s bill is unacceptable.

On March 18, the House Committee on Natural Resources held a virtual legislative hearing on “Restoring Abandoned Mine Lands, Local Economies, and the Environment.” Marissa Lautzenheiser of Rural Action, an Ohio-based nonprofit and our partner through the Reclaiming Appalachia Coalition, offered testimony on the impact of AML Pilot Program projects in Ohio, and the need to sustain reclamation work. Two prominent AML projects in Ohio are True Pigments, a company removing iron oxide from streams and converting it into paint pigment, and the Bailey’s Mountain Park Trail, which is bringing development to the small communities it touches while growing the outdoor recreation economy in Appalachian Ohio.

Robert Hughes, director of Eastern Pennsylvania Coalition for Abandoned Mine Reclamation, gave testimony on how essential the passage of these bills is for the success of diverse new economies in Pennsylvania and resolving the environmental injustice of leaving hazardous coal mining features unreclaimed for decades.

The committee may vote on the bills in the next few months — and Congress must act by September to ensure the AML fee doesn’t expire and leave coal-impacted communities without funding for future reclamation.

Tell your representative and senators to support AML cleanup!

Rounding out the news coming from D.C., the American Jobs Plan, the White House’s plan for rebuilding a new economy released on March 31, promises significant investment for coal-impacted land and communities. Alongside a suite of programs aimed at supporting dislocated workers and strengthening rural infrastructure, the plan allocates $16 billion for cleaning up mine lands and oil and gas wells, and $5 million for brownfields and Superfund sites, boosting support for reclamation jobs. The plan also pledges to bring 40% of the benefits from climate and clean energy infrastructure investments to disadvantaged communities, in line with the “Justice40” initiative included in President Biden’s January 27 executive order on climate change.

A recent report from the Ohio River Valley Institute presents key findings on the extent of unreclaimed abandoned mine lands, and the economic and environmental opportunities made possible through cleanup. The report finds that only 27% of total AML damage has been repaired, and that total unreclaimed damage is at least twice as large as official estimates. The estimated cost of AML cleanup falls between $18 and $24 billion as of 2020, and that number will likely continue to climb, according to the report. 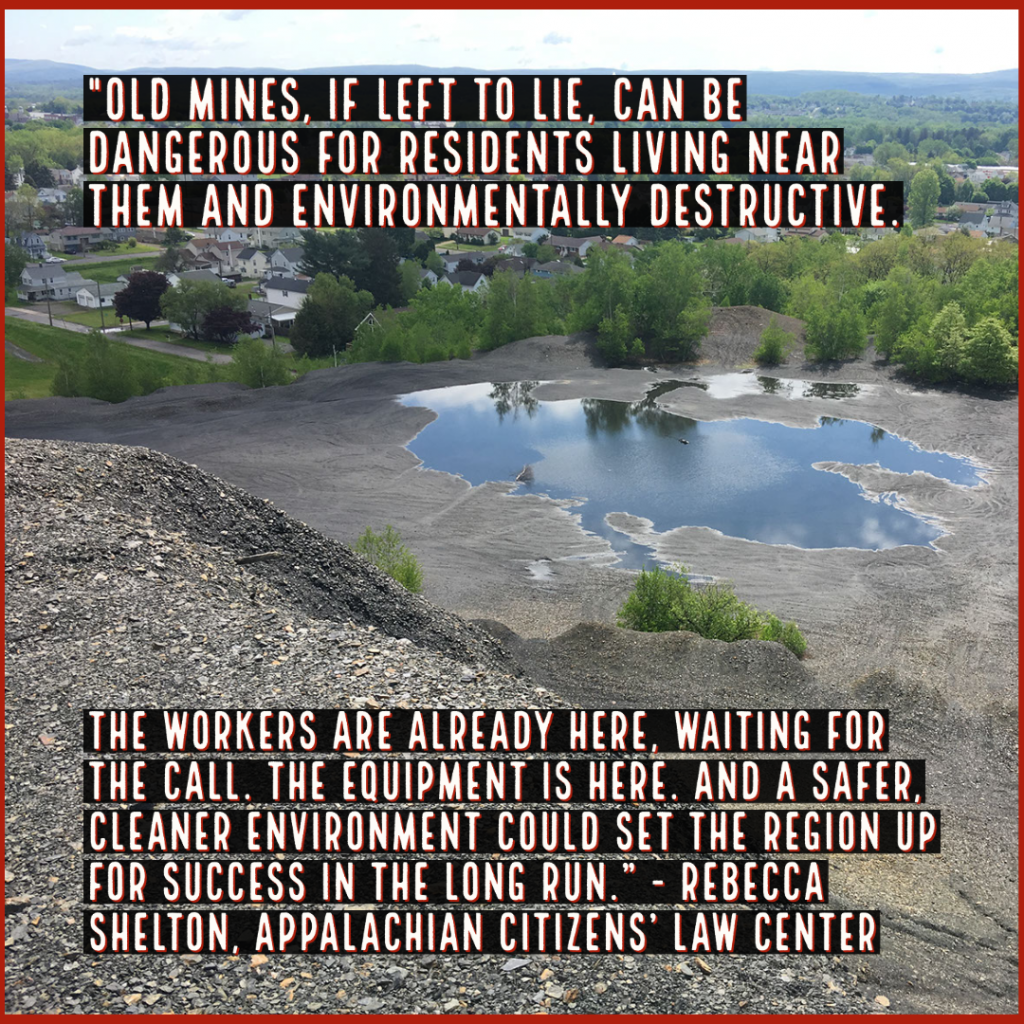 The good news is that reclaiming all abandoned mine lands could support over 300,000 total job-years, supporting nearly 7,000 direct jobs in the next 10 years alone. The Ohio River Valley Institute offers policy recommendations that include creating a public reclamation jobs program, centering ecological health, reforestation, and abating greenhouse gas emissions in reclamation practices, updating the federal AML inventory, and doubling AML fee levels and collection through 2050.

An upcoming report from Appalachian Voices will dig into the cost of reclamation across seven Appalachian states for sites mined after 1977 and the passage of the Surface Mining Control and Reclamation Act , and the consequences of widespread coal company bankruptcies. The report will estimate the total reclamation liability across Ohio, Pennsylvania, West Virginia, Tennessee, Kentucky, Virginia and Alabama. The report will analyze total outstanding costs and available reclamation bonds. As coal companies declare bankruptcy, Central Appalachia may be facing a crisis of mine abandonment, which could drain the state bond pools and leave reclamation underfunded. Appalachian Voices is exploring recommendations to navigate this looming crisis, to gather an accurate picture of reclamation liability, and to ensure timely restoration.

Downstream Strategies, our partner through the Reclaiming Appalachia Coalition, is working on a report that will offer a comprehensive review of the Abandoned Mine Land Pilot Program. The AML Pilot Program, administered through the U.S. Office of Surface Mining Reclamation and Enforcement, allocates funds for economic development projects located on or near abandoned mine land. The “State of the Pilot” report will analyze the funding decisions made by OSMRE and state agencies, address inconsistencies among the state agencies responsible for distributing AML Pilot funds and accountability issues pertaining to economic development deliverables, highlight success stories and best practices, and provide recommendations for improving the disbursement of AML Pilot funds. Downstream Strategies will soon have extensive insight into the spending patterns and outcomes of the program to date. 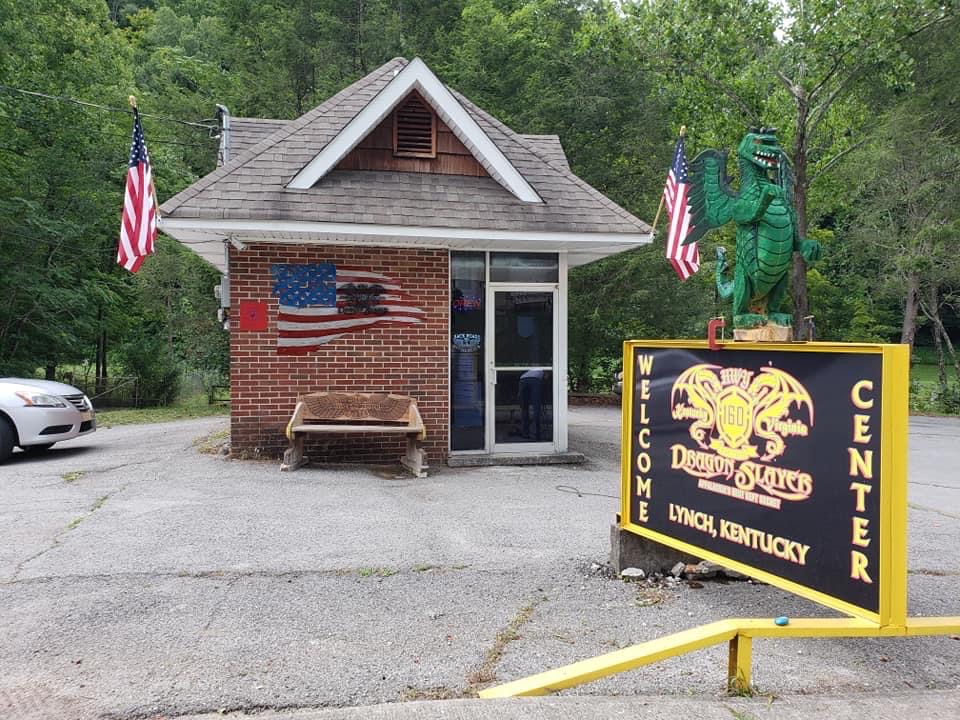 Two emerging projects in Southwest Virginia and Kentucky offer a taste of the innovative economic development occurring on abandoned mine lands.

Edelen Renewables and Savion, LLC, are planning to develop a 700-acre solar farm on a reclaimed mine in Buchanan County, Virginia. The installation will be the largest solar project in Virginia’s coalfield region, generating at least 60 megawatts of power, and creating 250 jobs during the construction phase, which is anticipated to begin by 2023. Buchanan County applied for over $2 million through the Abandoned Mine Land Pilot Program to support the project, showing that solar continues to be a desirable investment for the region.

Got a project idea for an abandoned mine land reclamation and economic development project in your community? Apply for a mini-grant by May 21.

In Harlan County, Kentucky, Backroads of Appalachia received Abandoned Mine Land Pilot funds to renovate a satellite bank building into a flagship welcome center for motorsport tourists. Backroads is sparking tourism in Eastern Kentucky and providing job training for folks on the road to recovery through a partnership with Fahe’s Transformation Employment Program. The project site is a former satellite bank building for coal miners in the historic mining community of Lynch, directly adjacent to the site of a 2015 mine blowout and near the coal train depot. The project received a mini-grant from the Reclaiming Appalachia Coalition in 2020 to provide technical assistance to the project applicants in support of their Pilot application.

This is an exciting time for cleanup of abandoned mine lands, with the White House renewing its attention to coal-impacted communities and high-profile economic development projects playing out across Central Appalachia. Stay tuned.

Tell your representative and senators to support AML cleanup!

Katie is a 2019 graduate of Dartmouth College, where she studied geography and English. She’s a fan of uphill sports, good writing, and her new home on the Holston River. As New Economy Fellow, Katie works with Appalachian Voices New Economy Program to build just and resilient rural communities and advance environmental protection.