Fewer than half of Tennessee’s electric cooperatives allow their member-owners to attend board meetings, and only three offer community solar programs. These are two of the findings in a new report released today by Appalachian Voices and two rural community groups evaluating the performance of Tennessee’s electric co-ops on a number of issues, from governance and finances to the programs they make available to their members.

The groups examined Tennessee’s 23 electric co-ops and ranked them on best practices determined by advocacy groups and member-owners. Of a total of 100 points, no co-op scored higher than 65. >>See the online scorecard here.

“All too often, boards and staff of electric co-ops lose track of the fact that they are supposed to run on principles based on involvement and authority of member-owners. This scorecard gives co-op members a better understanding of how their electric utility is performing and how to increase member involvement and co-op transparency,” said Bill Kornich, member of the grassroots group Powell Valley Electric Cooperative Member Voices.

“By practice and by law, co-ops are supposed to operate by the principles of democracy. It’s shocking that any of these electric co-ops would keep their member-owners from attending a board meeting. We need more state oversight to ensure transparency for all member-owners,” said Brianna Knisley, Appalachian Voices Tennessee Campaign Coordinator. 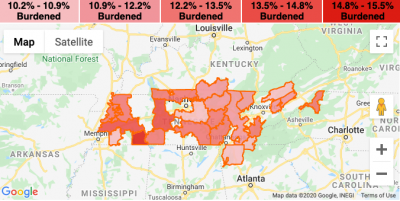 The scorecard found that more than half of Tennessee co-ops have a monthly fixed charge of more than $15, significantly higher than recommended fixed charges determined by groups like the Regulatory Assistance Project. This presents a particularly steep financial challenge for lower-income members, especially those currently struggling during the Covid-economic crisis.

The groups also examined energy burden among co-ops members, or the percentage of income spent on energy bills. They found that among members who are at 150% of the Federal Poverty Level, the average energy burden was 10% or more, roughly three times the national median among all residential electricity customers.

The scorecard also includes maps indicating that board demographics do not align with racial diversity among co-op membership.

“I would like to see some state oversight for Tennessee electric cooperatives. The challenges that many member-owners face is the lack of accountability, transparency and oversight along, with the excessive compensation for board and upper management, misconduct, capital credits, extreme budgets and spending,” said Glenda Jernigan of White House, Tenn., a member-owner of Cumberland Electric Membership Corp. for almost 30 years and a current member of the grassroots organization CMEC Members for Change.

Another CMEC Members for Change member, Teresa Briley of Portland, Tenn., said: “There’s also concern about the way board members and the general manager are operating the co-op’s monthly business meetings, with no feasible options for members to have access to these meetings.”

The groups acknowledged that more than half of the cooperatives scored are developing or partnering with local companies to bring broadband to their communities, but noted that the co-ops could be doing more to improve quality of life for their member-owners through energy efficiency programs, community solar and by lowering the fixed charges on monthly electric bills.