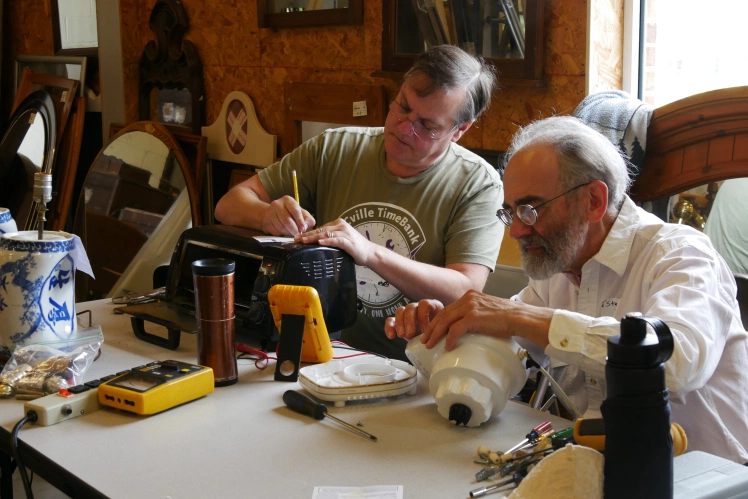 Replacing your phone screen, turning the rotors on your car and fixing the shutter on your camera – for many people, it is hard to imagine that you could not be allowed to fix the things you own. But this is exactly what a lot of companies want: to prevent public access to the information and parts to make repairs.

Making it harder to fix items influences consumers to throw away everything from smartphones and televisions to dishwashers and tractors. But there is a nationwide mobilization to disrupt this linear, disposable system. In addition to promoting legislation that allows consumers the ability to repair their own devices, the right-to-repair movement is focused on defending the things we own against obsolescence. These efforts include several community groups focused on helping people repair their items as well as transform their relationship with their belongings into one that does not end with the landfill. 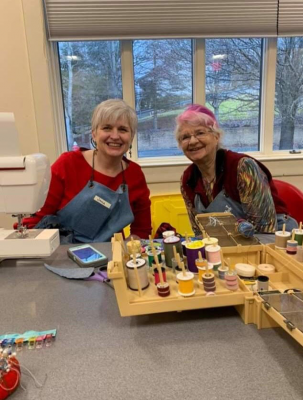 Members of the Repair Hub in Boone, N.C., helped to sew items brought in at monthly events pre-COVID-19. Photo courtesy of Repair Hub

One of these groups is the Repair Hub in Boone, N.C. Prior to the COVID-19 pandemic, the Repair Hub community hosted events each month where members of the public bring items to volunteers who help repair them for an optional donation. Andy Groothuis, who founded the Repair Hub in 2019, says the repair process involves aspects of reducing and reusing which, he says, “are two sides [of the ‘reduce, reuse, recycle’ waste hierarchy] that are usually, I find, overlooked.”

Groothuis states that when people have broken items, they either dump them in a drawer with the intention of fixing it “one day,” or, more often than not, he says, “they are going to throw them out, and that item probably could have been used.”

Similarly, the Cville TimeBank Repair Café in Charlottesville, Va., which started in 2015, hosts public events twice a year where participants can bring up to three items to be repaired for free. The president of the Repair Cafe, Kathy Kildea, says Repair Café is a community tool that gives people access to skills such as electrical work and sewing that they may not have the resources to access on their own.

Kildea says the project is about “utilizing those skills you have at your doorstep.”

One of the focuses of the Cville TimeBank Repair Cafe is education. People bringing in items are encouraged to sit with the “fixers” and watch repairs as they take place. There is also a “kids’ take-apart table,” where kids get to explore the inner-workings of items. These interactions foster curiosity and enable people to fix future goods that may break.

“If you think any repair is beyond your means or beyond your ability, you’re kind of sunk,” Kildea says. “But if you come at it from the point of, ‘Well, there’s just a piece in here that’s not functioning properly, I just need to figure out which one it is.’ Fostering that sense of curiosity is important not just for the kid, but for any customer that comes in with something they want to get fixed.” 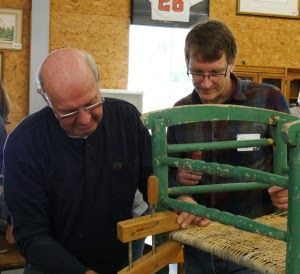 Kildea discusses how customers often lament that when an item they bought inevitably breaks, they feel like their only options are to throw it away or buy a new one. Kildea says that most people are not happy about these options, but are not aware of any alternative.

“I think [Repair Café] reinforces that you may not know how to fix it, but there are people in the community that probably could. It’s a matter of getting them in the same place to work on those fixes,” she says.

Many of the items these two communities see tend to hold sentimental value — especially jewelry.

A Repair Hub volunteer in the jewelry department, Kim Miller, has been repairing and making jewelry for 15 years. She says that it is satisfying to see these cherished items repaired so they are able to “get passed along again.”

Miller also spoke of the volunteers’ efforts to keep the operation going.

“That’s pretty neat, too, to see people that interested and more than willing to offer their time to help keep things out of the dump,” she says.

For many people in Appalachia, repairing is second nature. Whether it is out of necessity or enjoyment of things like mechanical work and quilting, self-sufficiency has been a longtime practice. Ben Hollman is one of these fixers. A native of Todd, N.C., and a retired mechanic with the North Carolina Department of Transportation, Hollman raises cattle, harvests hay, plows gardens, and works on farm equipment.

Hollman speaks of his various projects, saying “I just like doing that kind of stuff, and we’ve always kept cows. We had to get people to do our hay for us years ago, then I started getting my own equipment and started doing it myself.”

He grew up with a lot of knowledge of how things are done around the farm and his father taught him how to do mechanical work. Hollman mostly repairs his own equipment, but neighbors know to call him if they need help with their gear.

“If I can and I’ve got the time, when something breaks I usually try to give [my neighbors] a helping hand,” Hollman says. “And I do go to their houses and change oil in their tractors for them to keep them going.”

“That’s the reason I keep older model tractors,” he says. “I can work on them.”

Legislation known as “fair repair bills” aims to protect consumer rights by requiring manufacturers to provide customers and independent repair businesses with access to service information and affordable parts. At the federal level, this type of legislation only currently exists for cars, which is why you have the choice between taking your car to the dealership, your local mechanic or fixing it yourself when something goes wrong.

These types of legislative proposals aim to release consumers from the corporate grip and provide affordable options to enable people to repair their goods. When companies intentionally design products with a limited expected lifespan and neglect to provide consumers the resources to repair their goods, a practice called “planned obsolescence,” consumers are forced to buy new items when the product fails.

Companies like John Deere and Nikon have taken measures to make it more difficult for people to repair their products. In 2012, Nikon decided to stop selling genuine parts to third-party repair shops. In March 2020, Nikon discontinued supplying parts to the few remaining authorized repair shops, restricting customers to sending their broken equipment to one of Nikon’s two repair facilities.

In 2016, the Institute of Scrap Recycling Industries adopted a “Right to Reuse” position in support of recyclers’ ability to reuse products. The position stated, “Reuse provides an excellent environmental and economic benefit. Despite these benefits, product manufacturers limit the ability of recyclers to legitimately reuse products; for example, by limiting parts and parts information, manuals and utilizing digital locks that impede a product’s reuse.”

When something is tossed instead of repaired, it ends up in the landfill earlier than it might have otherwise. The United Nations estimates that 50 million tons of electronic waste are generated each year. This issue is amplified as many electronics have gotten more computerized, making it increasingly difficult for consumers to maintain products rather than buy new.

Repair communities are providing education and repair assistance for consumers who may not see options beyond disposal. Community provides a sense of empowerment that pushes consumers to reject planned obsolescence and move towards sustainability, affordability and self-sufficiency.