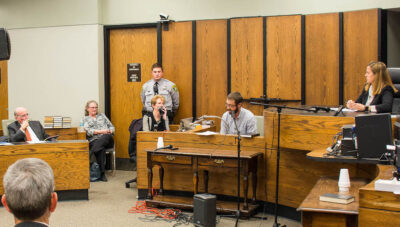 Public hearings for Duke Energy Carolinas’ bad faith rate hike have begun in North Carolina. On Jan. 16, Appalachian Voices staff were among the roughly two dozen people, about half of whom were from Duke, inside the Burke County Courthouse in Morganton, N.C., for the second of four public hearings this month.

The monopoly utility is requesting a 6.7 percent increase on its residential customers, claiming that it is needed to shift to “cleaner energy” — including fracked gas, which emits less carbon dioxide than coal but worsens climate change through methane leaks during gas extraction and transport. Duke also says the rate hike is needed to improve “grid reliability and grid reseliency.” In fact, very little of Duke’s requested increase is for direct investments in renewable energy, while hundreds of millions of dollars are being requested to clean up Duke’s coal ash mess. And the so-called grid improvements that Duke is requesting billions of dollars for have not been vetted by regulators, and critics state that this is just another way for Duke’s shareholders to profit from infrastructure maintenance and upgrades.

At the same time, Duke Energy Progress is requesting a 14.3 percent rate increase for North Carolina residential ratepayers, for which public hearings will begin in February.

After the attendees filed into the courtroom, the Chair of the North Carolina Utilities Commission called the Morganton hearing into session and invited people to submit testimony in front of the commission and Duke representatives. The commission is scheduled to review all the testimony it has received in an evidentiary hearing in Raleigh on March 23, and is expected to make a final decision about if — and how much — Duke can raise rates this summer.

There are only two public hearings left for the Duke Energy Carolinas rate hike! In February, hearings for Duke Energy Progress’ requested rate increase begin. Click here for a full list of dates and locations. If you won’t be able to attend, submit your comments via email to statements@ncuc.net with the subject line “DOCKET NO. E-7, SUB 1214.”

“I am here today to speak in opposition to Duke Energy’s request to raise rates for families and businesses to recover more than $3 billion in costs related in large part to propping up an outdated grid and energy system and cleaning up their own messes such as coal ash cleanup or climate-related storm recovery, both of which Duke is either directly implicated in causing or has been a large contributor to,” said McIlmoil. “To recover these costs, Duke is requesting yet another exorbitant rate increase while attempting to mask the true nature and impact of that increase.”

According to Duke’s application, rates for residents would increase by 10.3%, but a mandate for the utility to refund what Duke overcharged customers for taxes in recent years reduces that rate increase down to 6.7%. While this 6.7% increase may be true from Duke’s perspective — as they are portraying only the percent increase in “rate revenues” — the actual impact on the rates individual households pay will be greater. The reality is that:

Duke is also trying to get its ratepayers to foot the bill for the excavation of 80 million tons of toxic coal ash. The utility has stored this waste in unlined landfills across North Carolina where it can leach into drinking water, but state regulators ordered Duke to clean up their mess in early January. The final settlement between Duke and the state was the result of a lawsuit filed by the nonprofit Southern Environmental Law Center on behalf of numerous environmental organizations including Appalachian Voices.

In addition, Duke is requesting approval for an increase in their return on equity from 9.9% to 10.3%, which would bolster profits for Duke and its shareholders and increase costs for customers. The monopoly utility is also looking to shift more of their costs onto residents, increasing the burden of energy costs for 1.3 million households that already face unaffordable energy costs, representing more than one-third of all households in the state.

The average energy burden — or percent of gross household income spent on home energy costs — for these households is 9 percent, with communities of color, the elderly and the disabled bearing disproportionately high energy burdens within that average. By comparison, the cut-off for what is considered affordable for the average household is 6 percent.

Another measure Duke is requesting is a “deferred accounting mechanism” — essentially pre-approval — for billions more in future coal ash cleanup and grid improvement expenses. This is eerily similar to provisions in Duke’s ratepayer ripoff bill, S.B.559, that the monopoly utility spent months trying to jam, ultimately unsuccessfully, through the state legislature.

A representative from the retiree advocacy group AARP also gave testimony at the hearing.

“AARP recognizes the need for grid improvements and to help secure our energy future,” the representative said. “However, this plan, as designed, could lead to significantly higher costs and hardship for those who can least afford these increases.”

“That word criminally is not hyperbole,” said Wasson. “This is in the context of the company being guilty of criminal violations of the Clean Water Act, and this issue of whether ratepayers should be on the hook for this is still before the North Carolina Supreme Court. I urge the commission not to award any of these costs until that’s resolved.”

Duke claims that the costs they are requesting to pass on to ratepayers are just and prudent. The reality is that the majority of these new costs are associated with Duke’s own mistakes (e.g. coal ash), propping up aging nuclear plants, and unvetted “grid improvement” investments. To sell those investments to the North Carolina Utilities Commission and the public, Duke is hiding the true impact that these costs and the associated rate increases will have on residents, now and in the future.

Comments can also be submitted via email to statements@ncuc.net with the subject line “DOCKET NO. E-7, SUB 1214.”

Editor’s Note: This blog was updated on Jan. 27, 2020, to include information about Duke’s intents to shift from coal to fracked gas under the guise of gas being “cleaner energy.” While gas does not emit as much carbon as coal when burned, it worsens climate change through methane leaks during gas extraction and transport.