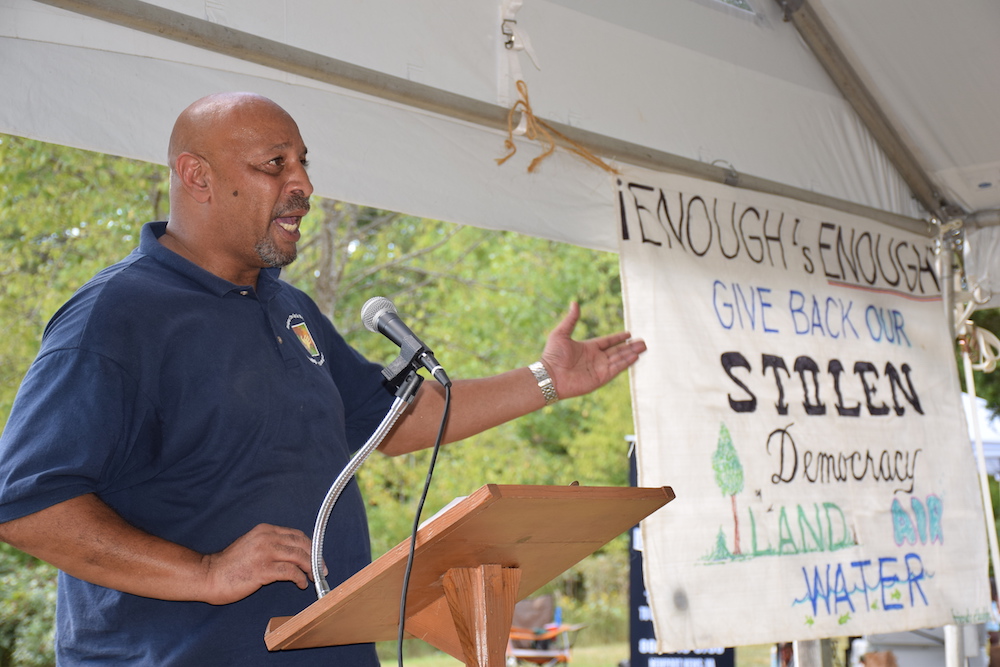 Several Union Hill, Va., landowners were among those who spoke at a Sept. 9 town hall speaking out against the planned Atlantic Coast Pipeline compressor station that developers are attempting to build in their community. Photo by Cat McCue

On Tuesday, an attorney for Virginia’s State Air Pollution Control Board finally admitted that Union Hill is a majority African-American community — bringing into question whether the commonwealth sufficiently evaluated environmental justice concerns when it approved permits for a massive fracked-gas compressor station for the Atlantic Coast Pipeline. The acknowledgement came during a line of questioning in front of the U.S. Fourth Circuit Court of Appeals over air quality permits issued in January.

“It was hugely vindicating for all of us,” University of Virginia anthropologist Lakshmi Fjord told the Richmond Times-Dispatch.

Fjord led a study released in 2018 which found that the community within a 1.1-mile radius of this proposed compressor station is an environmental justice community, where more than 83 percent of households are people of color, 33 percent are descendants of freedmen, and the numbers of elderly (70+) and the very young (0-6) are disproportionately higher than other age groups. Under Virginia law, it is the policy of the commonwealth to “[e]nsure that development of new, or expansion of existing, energy resources or facilities does not have a disproportionate adverse impact on economically disadvantaged or minority communities.”

Virginia has previously relied on demographic information provided by the state Department of Environmental Quality that did not recognize Union Hill’s status as an environmental justice community — which residents stated was based on flawed methodology. The board approved the compressor station in January after reviewing the DEQ’s information.

While the fate of the Atlantic Coast Pipeline and the communities in its path remain uncertain, the day in court was a meaningful victory for impacted residents.

“I thought it was great, great, great,” John Laury, an African-American who lives about a mile from the site, told the Richmond Times-Dispatch. “They cut through a lot of the rhetoric we have been listening to for approximately five years.” 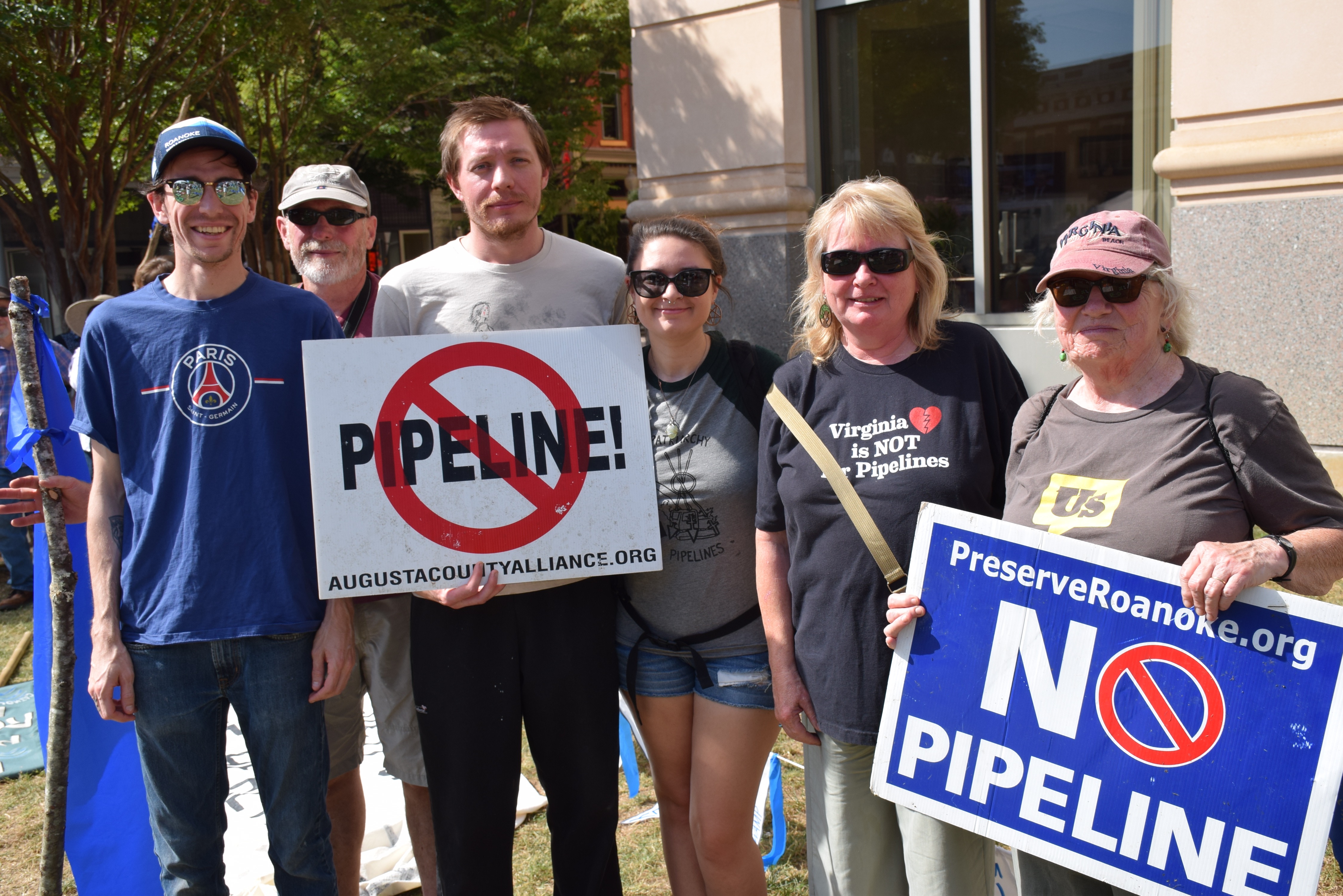 Construction is still stopped along all of Atlantic Coast’s route, including the Appalachian Trail in the George Washington National Forest and in the Monongahela National Forest. The Fourth Circuit Court of Appeals ruled that regulators did not have authority to give Atlantic Coast developers a right-of-way in December, sparing the trail and forests for now.

On Oct. 4, the Supreme Court announced it would hear the case. A date for oral arguments has yet to be set.

Meanwhile, Appalachian Voices and other pipeline opponents are calling on Congress to resist any attempts by Atlantic Coast Pipeline developers to pass language into law that would allow them to cross the Appalachian Trail on federal land.

In August, the two environmental groups North Carolina Climate Solutions Coalition and Friends of the Earth stated that nine additional natural gas projects are planned near the Atlantic Coast Pipeline’s proposed terminus in Robeson County, N.C. — a far cry from the two projects disclosed in the pipeline’s original permit application. County residents are resisting a proposed liquefied natural gas facility along with two supplemental pipelines that Duke Energy and Piedmont Natural Gas plan to build as connectors to existing infrastructure, according to Appalachian Voices’ Ridge Graham.

More delays on the beleaguered Mountain Valley Pipeline have caused developers to increase the projected cost and push back their expected completion date. Originally expected to be finished in 2018 and cost $3.7 billion, pipeline developers have pushed back the timeline to the end of 2020 and stated that it could cost up to $5.5 billion.

On Oct. 15, the Federal Energy Regulatory Commission ordered a long-overdue halt to construction along the entirety of the pipeline’s 303-mile route. FERC’s order is in response to the project losing key Endangered Species Act permits, and allows the company to do only the work necessary to stabilize the right-of-way in previously disturbed areas.

While Appalachian Voices and other environmental groups applauded this action, we also criticized FERC for not going far enough. The agency is allowing Mountain Valley developers to define what they consider “stabilization,” meaning the pipeline company could continue to undertake construction activities by claiming they are necessary for stabilization.

FERC’s stop-work order is a result of an Oct. 11 decision by the Fourth Circuit Court of Appeals to suspend two U.S. Fish and Wildlife Service permits for the Mountain Valley Pipeline that had allowed developers to harm the habitat of threatened and endangered species. This followed a lawsuit challenging the permits filed by Sierra Club attorneys on Aug. 12 on behalf of seven conservation organizations, including Appalachian Voices.

Also on Oct. 11, Mountain Valley Pipeline developers agreed to pay the Commonwealth of Virginia $2.15 million for environmental violations that caused significant erosion and water pollution in 2018. Mountain Valley is also required to submit to court-ordered and supervised compliance with best management practices as well as the implementation of independent, third-party monitoring. The agreement resolves a December 2018 lawsuit brought by the state against the pipeline company.

While the Mountain Valley Pipeline’s environmental problems continue to stack up, developers are pushing forward on their plans to extend the unfinished 303-mile pipeline by another 73 miles from Pittsylvania County, Va., into North Carolina’s Rockingham and Alamance counties. The proposed extension, called MVP Southgate, would also require a new heavily polluting compressor station to be built at the Virginia starting point.

If you can’t attend the meeting, you may send written comments by mail to:

You may also send comments via email to: PublicComments@ncdenr.gov. Please list “MVP Southgate” in the email’s subject line.

As the fight against dangerous fracked-gas pipelines in our region moves forward, Appalachian Voices is committed to continuing our work both in the courtroom and in staying vigilant alongside community members to ensure developers don’t violate their court-ordered work stoppages.