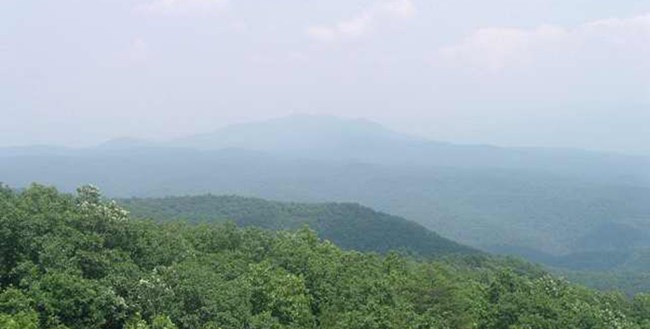 Long-range scenic views are a trademark of the Southeast and one of the fundamental reasons why so many flock to the mountains in the region. Great Smoky Mountains National Park is the most-visited national park in the country and welcomed 12.1 million visitors in 2020. The views in these areas provide a sense of place and without them, experiences in the outdoors can be muted and less fulfilling.

North Carolina is developing its state implementation plan for the Regional Haze Rule, an air quality protection program coordinated by federal and state authorities that targets national parks and wilderness areas. The North Carolina Department of Environmental Quality’s Division of Air Quality is currently seeking public comment regarding its draft plan. Some conservation and health groups have expressed concerns that the methods North Carolina and other Southeast states use to analyze haze-causing air pollution are missing key sources of emissions that are disproportionately located in low-income areas.

Haze pollution is a combination of air pollution particles and gasses that block light and reduce the visual range, clarity and color of views. Haze is composed of both natural and manmade pollutants, with manmade pollutants originating from vehicles and a variety of industrial facilities including paper mills, chemical manufacturers and coal-fired power plants. In addition to muddying skies, haze pollution negatively affects ecosystems and is harmful to human health and can cause a variety of illnesses and health complications.

Haze-causing air pollution can travel hundreds of miles and affect national parks and communities. The National Parks Conservation Association, a national conservation organization, identified 28 industrial facilities in North Carolina that are potential threats to air quality in protected areas across the Southeast, and a total of 241 facilities from any state that potentially impact visibility in North Carolina’s protected areas.

The Regional Haze Program finalized by the U.S. Environmental Protection Agency in 1999 called for visibility to be improved in 156 national parks and wilderness areas. This plan is the blueprint to reduce and eventually eliminate human-caused air pollution in some of the country’s most iconic areas. Once every 10 years, each state must prepare a state implementation plan to lower air pollution until natural air is eventually restored.

The Second Planning Period covering 2019 to 2028 is currently underway in North Carolina for the Regional Haze Plan. The state is accepting public comments on the draft plan until October 15.

According to guidance provided by the Environmental Protection Agency to assist states in their state implementation plans, plans will likely adhere to a few key steps, including determining baseline visibility in Class 1 areas, identifying which Class 1 areas – whether in or out of state – are affected by a state’s own emissions, selecting pollution sources for which emission control measures will be developed, determining control measures for those sources and developing methods to measure progress.

The National Parks Conservation Association ranks Great Smoky Mountains National Park second among national parks in pollution burden from haze — making this area one of the most haze-polluted parks in the country.

“These statistics underscore the importance and the need for North Carolina to have a strong haze plan,” Reeves said.

A May report issued by the National Parks Conservation Association revealed 10 Southeastern states, including North Carolina, are overlooking more than 300 sources of pollution in their state implementation plans, which will potentially allow more than 500,000 tons of emissions to affect parks and communities. Hundreds of sources including coal-fired power plants and oil and gas development have been omitted from the analysis, 90% of which are located in communities living under the poverty line.

According to the NPCA report, the model the states used to analyze air pollution, developed through the Visibility Improvement State and Tribal Associations in the Southeast planning organization, sets high emissions thresholds that identify only 33 sources of pollution for monitoring–the expert commissioned by the NPCA identified 342 in the region. The model also relies on 10-year-old data that, according to the NPCA, inaccurately reflects increases in certain pollutants that have negative effects on air quality, including nitrogen oxides and particulate matter.

“By failing to request any analyses from coal-fired power plants, or analyses of possible [nitrogen oxide] or [particulate matter] reductions from any sources, North Carolina is hamstringing its ability to achieve clear skies,” authors wrote. “It is also missing an opportunity to protect fenceline communities who bear the brunt of air pollution from these industrial facilities.”

During the first planning period of the Regional Haze Program, from 2008 to 2018, the North Carolina Department of Environmental Quality reported improved visual range from 28 to 39 miles in the state’s Class 1 areas as a result of reductions in sulfur dioxide and nitrogen oxide. This is an overall 30-mile improvement from the 9-mile visual range in 1998.

The North Carolina State Implementation Plan draft for the second planning period was released on August 31. The N.C. Department of Environmental Quality (DEQ) is accepting comments until October 15. Comments can be submitted via email to DAQ.publiccomments@ncdenr.gov with the subject line “NC RH SIP” or by voicemail to 919-707-8403.