Unreclaimed Revelation mine drops mud and rock onto neighboring property 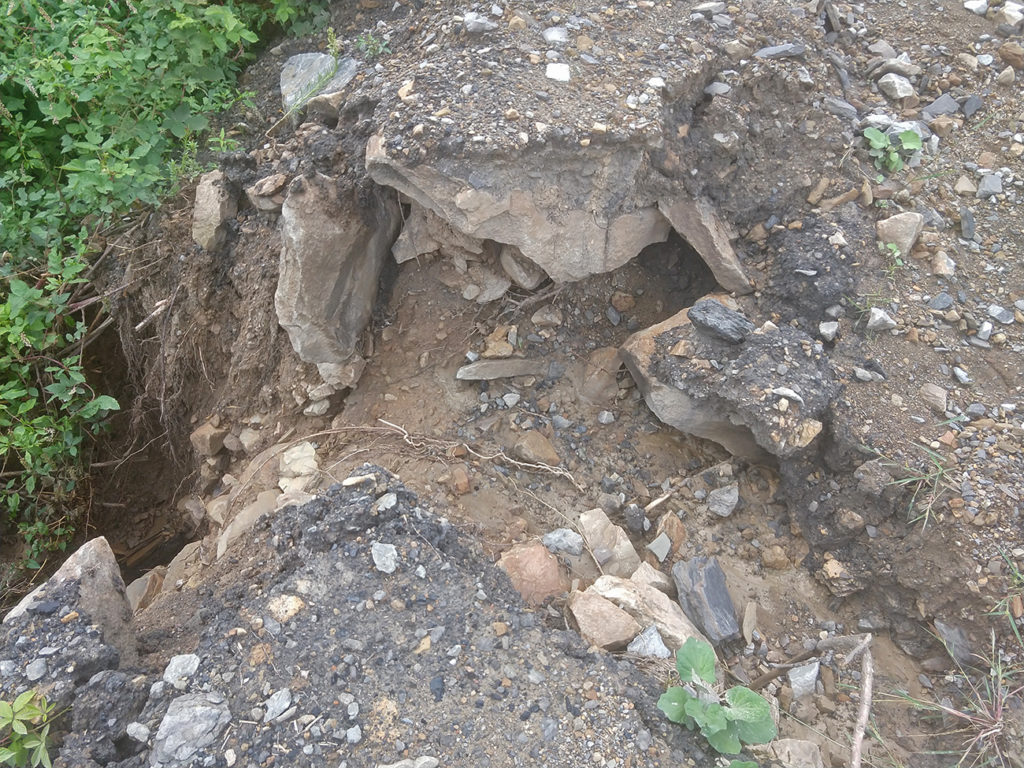 The ditches meant to contain runoff from the unreclaimed Aily Branch mine are clogged with sediment, which caused this berm to burst and send a torrent of mud and debris toward the Mitchells’ home this summer. Photo by Willie Dodson

On August 1, 2019, Virginia’s Department of Mines Minerals and Energy (DMME) initiated bond forfeiture on four coal mining permits held by bankrupt Blackjewel Energy and the associated, also bankrupt, company Revelation Energy. On August 12, DMME initiated forfeiture on a fifth Revelation permit. Bond forfeiture occurs when regulators seize monetary resources provided by a company in order to fund reclamation when the mine operator fails to perform such work itself. It is the most severe enforcement action available to mining regulators, and it is extremely rare.

Even though the state is taking this unusual step, it’s not clear who will ultimately address the problems associated with bond-forfeited mines, or when. And this uncertainty could be a sign of more troubles to come if other, larger, companies try to walk away from their reclamation obligations.

The permits currently in question (#1102080, #1202259, #1102135, #1102137, and #1102141) are all located in Buchanan County, Va., and each has arrived at forfeiture after a history of unabated environmental damage and/or failures to reclaim mined areas. Runoff and debris from the Aily Branch surface mine (#1102080) in particular has caused serious impacts to Dismal Creek and adjacent property dating back to 2014. The most recent incident of this sort occurred on August 13.

“This sort of thing has happened at least five times,” said Bobby Mitchell, whose property abuts the Aily Branch mine. “We just had a short period of rain this time, but a big wave of water came down off the mountain. One other time the water coming off the mountain was so loud it woke up my dad, who really couldn’t even hear too well. We had logs, big rocks, and mud all over our property that time.” 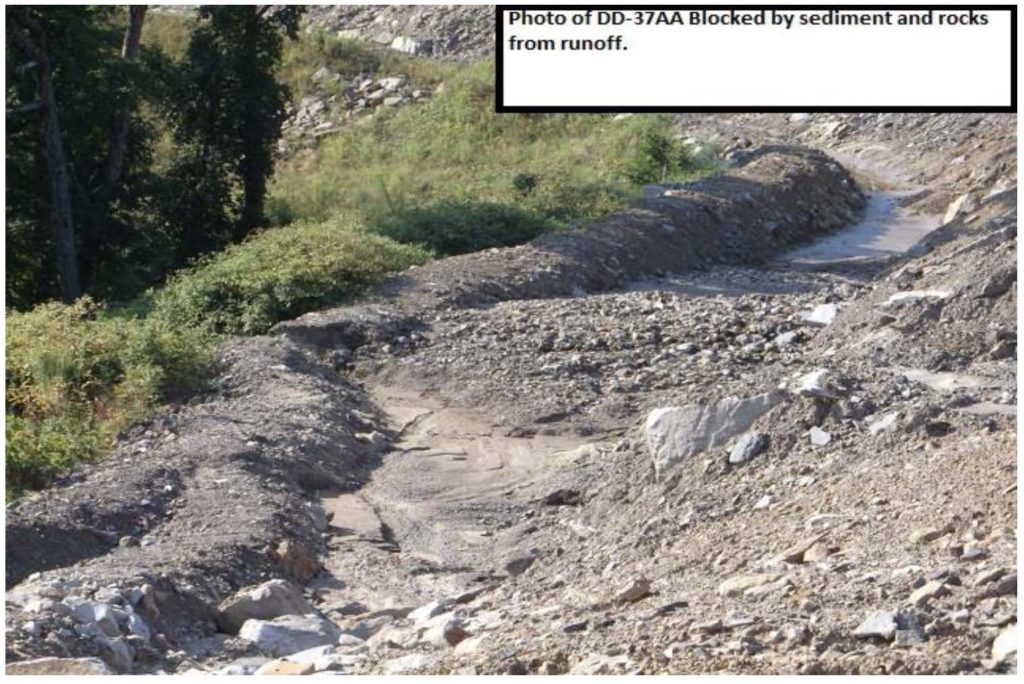 At the Aily Branch surface mine, a ditch meant to help control runoff is clogged with sediment and rocks. Image from the Virginia DMME Notice of Violation issued against Revelation Energy on Aug. 20, 2019.

Appalachian Voices first became aware of community complaints around the Aily Branch mine in 2017, and subsequently visited the area to discuss concerns with local residents. After the most recent washout affecting Bobby Mitchell’s property, he lodged a complaint with the DMME, and called Appalachian Voices for support. At this point, I visited Mitchell’s property to survey the damage, and then asked the DMME for permission to conduct a citizen inspection at the Aily Branch permit, a right that federal law affords to individuals impacted by mining operations. This inspection was granted and on Aug. 27, I visited the site with two state mine inspectors.

During the inspection, I saw a large area of barren dirt and rock along a steep slope, graded down into the hollow above the Mitchells’ home. Below this unreclaimed slope, ditches intended to catch sediment and control runoff were full of mud and rock to the point that they did not function. As a result, the earthen berm on the downslope side of one ditch had become saturated and burst through, allowing a torrent of mud and debris to rush down the mountainside, rutting out a headwater tributary to Dismal Creek and accumulating in the Mitchells’ yard. During the same rain event, a sediment pond elsewhere on the permit overflowed, damaging the mine’s access road.

In response to the incident, Virginia regulators issued two Notices of Violation (NOV) to Revelation for failure to control sediment, and one for failure to maintain a haul road. But with Revelation bankrupt and workers shut out (in some cases without receiving pay for hours worked), there is no one on-site to remedy the situation. What’s more, these violations occurred two weeks after DMME had already initiated bond forfeiture on the mine, a move supposedly much more extreme than simple NOVs, but in reality proving to be equally impotent in the face of this particularly chaotic bankruptcy.

When dealing with chronic violators, DMME and other regulators have typically entered into (and often continually renewed) compliance agreements — compromise plans where companies promise to eventually fix problems on a relaxed timeline — well before the specter of bond forfeiture enters into the picture. 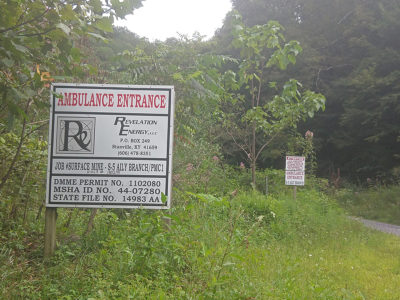 Revelation Energy’s Aily Branch surface mine is one of five mine permits with unresolved problems that Virginia regulators recently moved into bond forfeiture proceedings. Photo by Willie Dodson

Why would regulators make a habit of kicking the can down the road like this? The strongest incentive for such ill-advised deference to noncompliant mining companies is the fact that bonding mechanisms are largely insufficient, and the forfeiture of bonds requires regulators to assume the massive liabilities associated with mine cleanup without the necessary resources to do so.

The Alliance for Appalachia published a detailed report in 2018 outlining the various ways coal companies skirt the requirement to post bonds that are adequate to fully fund mounting reclamation needs across the region.

Most egregious is the practice of self-bonding, by which a mine operator simply swears they’re good for it, without any actual transfer of cash into a secured account. (Virginia outlawed this practice in 2014, but self-bonds are still in effect for 20 permits in the state that are held by the family of West Virginia Governor Jim Justice.)

Pool-bonding is when a company posts only a portion of a mine’s estimated cost of reclamation into a pooled fund with other companies, on the assumption that while some bond forfeitures may occur, the total fund will remain solvent — an assumption that is refuted in the Alliance for Appalachia’s report, as well as a 2012 study funded by the state of Virginia. There are many pool-bonded mines in Virginia, including four permits held by Revelation.

One very faint silver lining with regards to the current Blackjewel/ Revelation bond forfeitures is that these specific permits are all bonded at the full cost of reclamation work — or at least what the DMME estimates that cost to be ($10,747,600 in the case of the Aily Branch mine). They are also backed up by sureties. A surety is an insurance policy guaranteeing the payment of a debt.

The long history of violations on the Aily Branch permit provided the state of Virginia ample cause to initiate bond forfeiture at an earlier stage when Revelation at least presented itself as sound and solvent. Instead, regulators allowed the company a lenient compliance schedule, which has now extended into the company’s bankruptcy.

This should be a cautionary tale for the DMME and Virginia Governor Ralph Northam, as other companies (notably, but not limited to, those associated with West Virginia Governor Jim Justice) are currently on the same path towards insolvency. If, and quite possibly when, permits are revoked for Gov. Jim Justice’s family’s self-bonded mines, the DMME will be assuming $195 million in cleanup costs with literally no funds available to perform the necessary work. 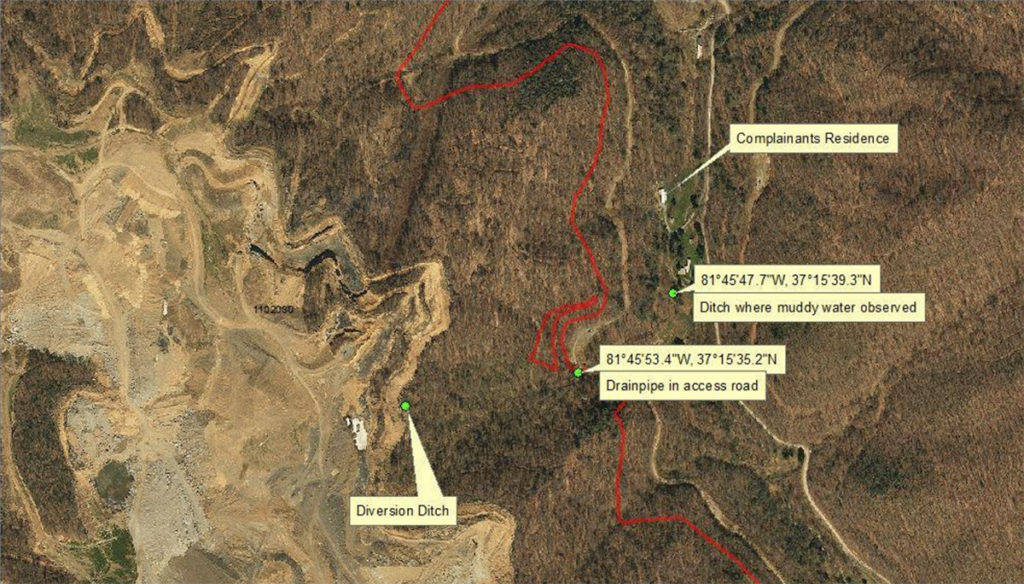 In response to a complaint Bobby Mitchell filed in June 2019, an inspector visited the site and created this map showing the relationship between the Mitchell residence and the drainage problems at the mine. Image from DMME Complaint Investigation

Revelation and Blackjewel, as well as their surety providers, were given 30 days from the initiation of bond forfeitures to request a hearing reviewing the forfeiture decisions. The surety companies (Indemnity National Insurance Company and Lexon Insurance Company) have requested a meeting, but the DMME is not considering this meeting to be a request for a formal hearing. According to DMME spokesperson Tarah Kesterson, the forfeitures are on hold until the meeting takes place, and this meeting has not yet been scheduled and will not be open to the public. While Appalachian Voices is not aware of any statute regarding a meeting like this, Virginia law states that a “…request for a hearing will not operate as a stay of the forfeiture decision.”

Not only is it undetermined when DMME, Indemnity National and Lexon will meet to discuss this matter, but, according to Kesterson, there is no deadline for the finalization of a coal mine bond forfeiture anywhere in Virginia regulations.

Ultimately, DMME may allow Indemnity National and Lexon to directly assume the responsibility of remediating violations and completing reclamation for these permits, or it may finalize the forfeitures and contract out the necessary work itself. It is also possible that another coal company will acquire one or more of these permits from the wreckage of the Blackjewel/ Revelation bankruptcy before the forfeiture process resolves, a prospect DMME officials have hinted is in-the-works for at least one of the affected permits.

At this point it is just not clear who will perform the needed work, or when. In the meantime, a vast expanse of bare dirt and rock sits up a steep slope from Bobby Mitchell’s home. With the rains of late summer in the forecast, the Mitchells can only hope for the best while fearing the worst, and waiting for the DMME, or yet another coal company, or maybe an insurance company, to get to work.

“If we get a real hard storm, it could be really dangerous. Not only could it flood the property, but it could actually hurt someone,” said Mitchell. “I’d just like to see the mountain repaired all the way up. That’s the only thing that’s gonna really stop the problems we’ve been having.”

UPDATE: The original version of this blog stated that a surety company had requested a hearing with DMME. After this blog was published, DMME contacted Appalachian Voices to clarify that the meeting requested by the surety companies does not qualify as a formal hearing, and the blog has been modified to reflect that change. DMME stated that the purpose of the pending meeting is for the surety companies to discern if they would like to take on reclamation of the permits in question, or simply release the bond to DMME. A formal hearing would be for the purpose of a surety company, or permittee, to contest a forfeiture decision.

This distinction notwithstanding, the forfeitures are currently suspended for an indefinite duration at the discretion of the DMME, with no opportunity for public oversight or engagement.