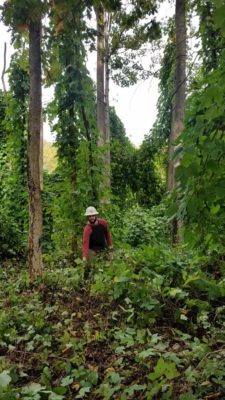 A volunteer crew with American Conservation Experience clears kudzu at one of the few new kudzu sites in Great Smoky Mountains National Park. This site was aggravated by the 2016 Gatlinburg forest fire. Photo courtesy of Jesse Webster

Kudzu has crept deeply into the psyche, literature and folklore of the people of the South — even into superstitious warnings like this: “Don’t leave your bedroom window open at night, the kudzu vine might creep in and strangle you in your sleep!”

Of course there is no real threat like this to people, but kudzu, Pueraria montana, is a threat to native plants. Kudzu kills everything in its path, winding itself around tree trunks, breaking down branches and even uprooting trees. It can transform huge swaths of biodiverse mountainside and forest into alien-looking landscapes covered by large green leaves that scientists call “vine barrens.”

In its native habitat, insects and pathogens kept kudzu at bay — but it proliferates across the Southeast.

A 2010 U.S. Forest Service study suggests that 227,000 acres of southern forest are covered in kudzu, and that it is spreading at a rate of 2,500 acres per year. However, many websites repeat the unsubstantiated claim that kudzu covers approximately 7 to 9 million acres in the United States.

Kudzu plants from Japan were first introduced to the United States in 1876 at the Philadelphia Centennial Exposition as an ornamental vine. During the 1930s, when dust storms ravaged farmland soil, the Soil Conservation Service aggressively promoted kudzu as the cure-all for soil erosion. The agency grew over 10 million seedlings and paid hesitant farmers up to $8 an acre to plant it on their farms, fueling the plant’s rise.

Kudzu is a semi-woody perennial vine with broad trifoliate leaves up to four inches wide. It establishes plants by forming roots at nodes where it comes in contact with the soil. These roots enlarge and form new crowns. Kudzu roots can penetrate over 9 feet deep and can be up to 4 inches thick. Vines can extend up to 100 feet in length and can grow as fast as one foot per day.

What is the secret of the success of kudzu to the detriment of all surrounding plants? It is stress-tolerant, with vast underground roots that cannot be damaged by drought or freezing. Kudzu also forms a strong symbiotic relationship with nitrogen-fixing bacteria, making it possible to flourish in nitrogen-poor soil and spread quickly. But kudzu does not just out-compete native plant and tree species; it smothers other plants under a thick blanket of leaves so they cannot access the sunlight to photosynthesize.

The current control methods for kudzu are: mechanical control with brush hogs and shredders, chemical control through herbicides, and prescribed burning, culling or grazing.

One success story is at Great Smoky Mountains National Park. According to Forester Jesse Webster, a program to control kudzu began when the problem was first detected in the park in 1940 and continues today. It is a simple treatment plan using herbicides and clipping repeated every three years on active sites.

“Kudzu is 95 percent eradicated in the park,” Webster says. “The other 5 percent remains only in the steepest and hardest-to-get-to places in the backcountry.”

Grazing animals like cows are a wonderful help for controlling kudzu on farms, but goats are the best animal to control kudzu in the mountains. Goats not only love to chew kudzu leaves, they like to eat its woody shoots and stems as well. Various programs across the region have released goats in kudzu-infested forests and mountainsides. But to keep the vine at bay, goats must be used often over the same landscape.

Something unexpected happened in the control of kudzu in 2009. A bug that eats kudzu, Megacopya cribraria, arrived in Atlanta on a plane from China, likely from hitch-hiking on a plant, and proliferated quickly. As an insect that feeds on legume plants, it found its way to farm fields and began damaging soy crops, expanding its range until 2014.

“The kudzu bug did help reduce kudzu initially,” says Karan A. Rawlins of the Center for Invasive Species and Ecosystem Health in Tifton, Ga., “but unfortunately, kudzu has fairly successfully bounced back.”

Where dedicated and vigilant efforts to eradicate kudzu have been made, there has been great progress. “Kudzu is the poster child of success in fighting invasive species,” says Webster.

But where control measures are not underway, kudzu spreads along sunny corridors like roadsides, streams and distressed or cleared land. According to Dr. Lewis Ziska with the U.S. Department of Agriculture, kudzu is migrating northward into new areas, fueled by climate change. It not only thrives in warmer temperatures, but it grows faster with increased carbon dioxide in the atmosphere. It is clear that kudzu will continue to be a presence on the land and in the imagination for many years to come.