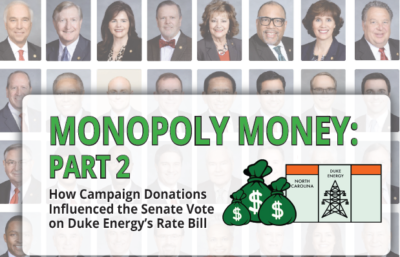 The Energy Justice North Carolina Coalition released a report today detailing the influence of Duke Energy’s campaign contributions on state legislators’ support for Duke-sponsored bills together with a new, interactive web tool that tracks political contributions from electric monopolies like Duke. Both the report and web tool are based on public data of nearly $1.7 million in donations to current legislators over the past ten years from electric monopolies, which are among the top political givers.

Today’s release precedes a statewide tour to educate and engage the public in reforming how electricity in North Carolina is generated, delivered and priced.

Expanding on its “Monopoly Money” report released in April, researchers with the coalition analyzed ten years of political contributions to track how Duke Energy has targeted its giving to gain political support for its controversial rate bill pending in the current session, Senate Bill 559. Duke’s bill could lead to a 40 to 50 percent increase in electric bills for consumers, according to one independent analysis.

“Duke’s bill puts all of the risk on ratepayers while the only clear benefits are for the utility and its shareholders, and yet it easily passed the Senate despite strong opposition from virtually everyone except for Duke,” said Rory McIlmoil, Senior Energy Analyst at Appalachian Voices and lead author of the report. “The data for Duke’s campaign donations strongly indicate that those donations had a direct influence over the vote for the bill on the Senate floor.”

The analysis shows that key leadership in the state legislature received more than $475,000 from Duke between 2009 and 2018. Additionally, senators who voted in favor of SB 559 had taken in ten times more from Duke Energy during the 2018 election than senators who ultimately opposed the bill.

Visitors to the “Follow the Monopoly Money” web page launched today can find out how much money their own legislators have received from electric utility monopolies through an easy-to-use tool that connects to the database of campaign contributions. The website offers a link for North Carolina residents to instantly relay how they feel about it by sending their legislators a message.

“Because North Carolinians have no choice in where to buy their electricity, campaign donations from a monopoly like Duke are much worse than the general problem of too much money in politics,” said Matt Wasson of Appalachian Voices who oversaw development of the web tool. “When electric monopolies are able to essentially bribe our public officials who are entrusted to protect the public interest, families and businesses have no recourse.”

The release of the report and web tool comes one week before the launch of the North Carolina “Energy Justice Tour,” which will kick off in Asheville on Monday, July 22, with an event called Asheville Uprising. The tour will then weave its way across the state with stops in Winston-Salem, Raleigh, Goldsboro and Wilmington, with more locations planned for later in the summer.

The tour events will draw attention to the overwhelming influence that electric monopolies wield over state politics and present strategies for how regular citizens can help reform the electric monopoly system. Attendees will also learn how to get involved with local organizations working to make energy cleaner, safer and more affordable in their own community.

Energy Justice North Carolina is a collaboration of 14 local, state and national nonprofit organizations seeking to change how the state’s system of electricity generation and sales is structured by ending the monopoly control of electric utilities and bringing a competitive market to drive innovation and lower costs to consumers.