Meet the Marvelous World of Odonata 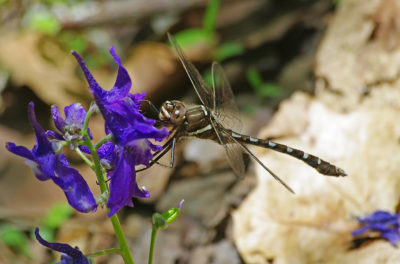 Flashy and colorful, dragonflies and damselflies are named not for their beauty but for their ferocity. Both types of winged bugs are members of an order of carnivorous insects called Odonata, derived from the Greek term for tooth, which the insects have on their mandibles. In North America, there are nearly 500 species of Odonata and 241 of those species reside in the Southeast.

These two Odonata species have several physical differences. The eyes of dragonflies take up most of the head and wrap around the side, while damselfly eyes always have a space between them. Dragonfly bodies are bulkier, shorter and thicker than those of damselflies, and dragonflies’ hind wings are larger than their front set of wings. Dragonflies at rest also hold their wings out to the side, unlike damselflies, which hold their wings behind them.

When it comes to identifying Odonata species, there is a learning curve, says Tennessee State Parks Biologist Emeritus Richard Connors. There are various markings on adults that aid in identification, including head size and coloring of markings on the wings and abdomen. 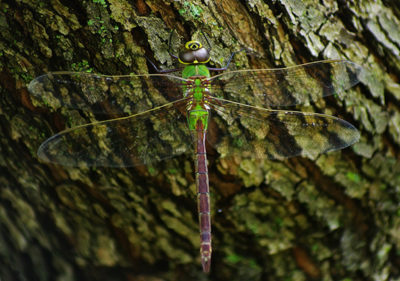 “That’s where field guides come in handy,” says Connors. “You can identify by process of elimination going through keys, visually matching and then reading the details; it’s fun.”

For help identifying species, Connors suggests posting photographs to websites like the Southeastern Odes Facebook group or Odonata Central, the record-keeping site of the Dragonfly Society of the Americas.

“There are people out there who are really into this, like myself, and would be happy to help people identify what they’re seeing,” he adds.

Odonates spend most of their lives in water during their larval or nymph stage. Unlike butterflies, dragonflies and damselflies do not have a resting stage during their metamorphosis. After the eggs are laid, they typically hatch in two to five weeks. The nymphs spend around a year in the water, using gills to breathe. Starting in April, odonates begin to emerge and crawl out of the water and shed their skin to become adult dragonflies and damselflies. 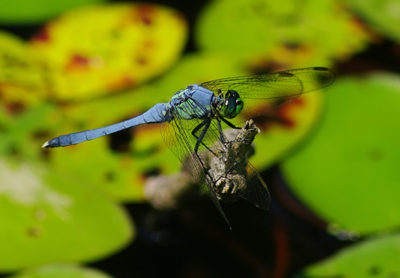 The adult stage only lasts for a few weeks in some species. During the short time that odonates are “on the wing,” as Connors says, they must mate and lay eggs. They mate in a unique wheel position, and cross-breeding between different species is prevented by species-specific body shapes. While she lays hundreds of eggs, the male will hold onto the female, both to protect her and to keep other males away.

Odonates play a valuable role in the food chain as both predator and prey. Adult and larval dragonflies eat insects and help control the mosquito population. According to the Smithsonian Institution, an adult dragonfly eats up to 30 mosquitos a day. Both damselflies and dragonflies have a spoon-shaped, hinged jaw that can shoot out in an instant and catch their prey.

In wetlands without fish, dragonfly nymphs are the top predator. In turn, nymphs are essential prey for fish and amphibians, while adults are consumed by birds, bats, lizards and spiders. To avoid predators, adult dragonflies utilize camouflage and rapid maneuvers enhanced by their bullet-shaped body and flapping wings.

Beyond that, these species can indicate the biological health of their aquatic habitats. Dragonflies and damselflies have been heavily impacted by the loss and pollution of wetlands for human development.

“Some of the most common indicators of water quality are sediment, pathogens and nutrients,” says Larry Everett, environmental consultant for the Tennessee Department of Environment and Conservation. Typical sources of water contamination that damage odonate habitats include construction sites, malfunctioning wastewater treatment systems and the cattle industry. 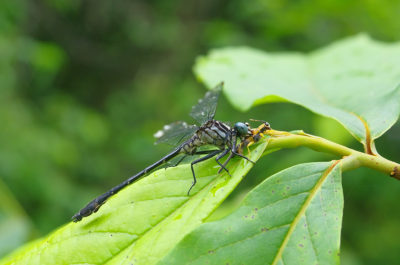 According to the Xerces Society, an international nonprofit dedicated to invertebrate conservation, dragonflies may also help assess the effects of global climate change.

“There have definitely been species that are expanding their ranges, which may be an indication of climate change,” says Everett. “Some species that just 15 to 20 years ago were known to be from Tennessee, now they’re widespread and have gone further north, which indicates that they might be expanding due to warmer temperatures. But that could be from other things as well.”

At least 20 percent of all known odonate species in North America are considered to be at risk, but creation of pond habitats, protection of streamside habitat and water quality management can aid the continued survival of these species.