A report out today from a coalition of 14 community and environmental justice organizations reveals that Duke Energy skewed its political campaign contributions last year in order to gain support from Senate Minority Leader Dan Blue and other lawmakers instrumental in reviewing what is now a highly controversial bill. Critics say the bill and review process have been deceptive, and could allow Duke to raise rates every year with reduced transparency while gouging ratepayers for tens of billions of dollars. 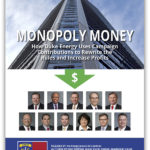 Senate Bill 559 (and companion House Bill 624) could allow electric monopolies to get a single regulatory approval for five year blocks of annual rate increases. The bill has been moving swiftly through the General Assembly despite a growing wall of opposition from AARP NC, Walmart, Google, large industrial customer associations, environmental justice groups and others.

The Energy Justice NC Coalition says the bill could saddle North Carolina businesses and families with up to $23 billion for Duke’s twice-rejected grid “improvement” scheme and its ongoing mishandling of coal ash. The groups say that Duke is clearly using its influence and profit-driven agenda to supersede the public interest.

Key findings in the analysis of Duke Energy’s legislative giving in 2018 show that:

“Our elected officials are supposed to be the referees when it comes to protecting the public interest in the face of Duke Energy’s pursuit of profits,” said Rory McIlmoil, Senior Energy Analyst and author of the report. “The evidence shows that Duke is targeting its campaign contributions in order to game the system by bribing the referees.”

He added that the bill also could allow Duke to make more profit than currently authorized and pass it along to shareholders rather than having to refund ratepayers. With the single up-front approval for five years of rate hikes, utilities could gain advance approval for future investments even if time and technology render them unnecessary.

“This sorry story is a case study in deceptive corporate influence, and it’s exactly why the Energy Justice NC Coalition was formed,” said Connie Leeper, Organizing Director for NC WARN. “Duke Energy executives and its legislative cronies are making a mockery of our state. It’s time to end their monopoly control over North Carolina.”

In a public statement last week, the coalition said Duke Energy is using the devastation of major hurricanes as a pretense to revive its grid “improvement” scheme, which would cost customers billions of dollars for unnecessary projects and was rejected last year by the legislature and NC Utilities Commission.