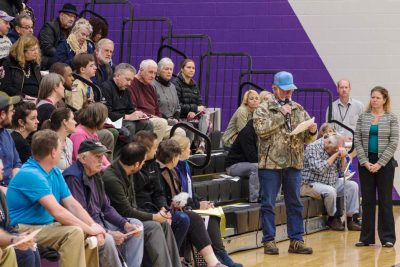 February 2nd, 2019 marked the five year anniversary of the Dan River spill that spurred a series of coal ash cleanup legislation, public hearings, film screenings, news stories and community meetings across the state of North Carolina. Since that time, families and neighbors of the fourteen coal ash sites have come together time and again to call for Duke Energy and state regulators to do the right thing. The fight for coal ash cleanup has gained interest across the country and even became an election issue in 2016. But where does coal ash stand in North Carolina now?

Final Closure Plan Public Information Sessions
This past January, the North Carolina Department of Environmental Quality held six public information meetings across the state to discuss the closure plans for the remaining coal ash ponds at Allen, Belews Creek, Cliffside, Marshall, Mayo and Roxboro Steam Stations. These meetings served as a chance for community members to ask DEQ staff from various divisions questions about the details of the closure plans and to provide comments about their concerns and preferred cleanup methods. This feedback will help the DEQ decide the fate of the tens of millions of tons of coal ash remaining in the groundwater in North Carolina.

However, problems have arisen, such as the community’s frustration with the format of the meetings. The expo-style format of different section tables, as well as DEQ’s initial failure to use any of the available time to hear public comments (as there would be in a public hearing format), left many residents at several of the meetings feeling that there was a lack of a real space or opportunity to give comments that the DEQ would incorporate into their closure plan decisions.

Another issue came from community members receiving incorrect and conflicting information from DEQ staff at different tables— for example, overstating the amount of ash being stored— as well as a lack of information provided by Duke Energy for the closure plans, like how much of the coal ash is actually in the groundwater table. In addition, the informational materials displayed at each table revealed a significant amount of influence from Duke Energy. With larger maps and the most detailed explanations, the DEQ gave the most credence to the “hybrid” closure model, the cheapest option for Duke Energy, which is essentially a modified cap-in-place proposal where the ash will just be consolidated into a larger pile.

At these meetings, all six communities made their preference clear: they deserve the groundwater protections received by communities at the eight other sites in North Carolina that are being completely excavated. Complete excavation in South Carolina resulted in immediate improvement in local water quality. And the governor of Virginia has just called for the full excavation of Dominion’s unlined coal ash ponds. If these meetings are true to their purpose, the DEQ should know excavation is the only viable solution for the remaining sites. 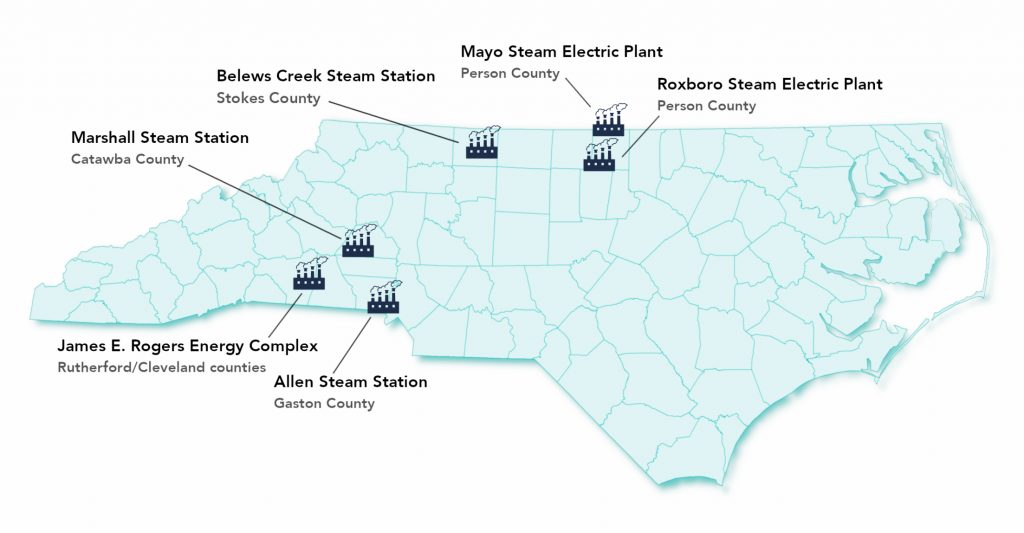 Belews Creek
On Thursday, January 10, residents from Walnut Cove and advocates from Act Against Coal Ash held a press conference at Walnut Cove Elementary School ahead of the Belews Creek public information meeting. Nine speakers discussed the impact that the contamination has inflicted on the health and livelihood of neighbors as well as the value of their homes. The press conference also highlighted that the community has come out time after time over the last several years to make clear their concerns about pollution from Duke Energy’s coal ash and to call for Duke Energy to excavate the coal ash from their unlined, leaking pits.

Belews Creek houses a 12-million-ton lagoon of ash in a 280-acre ravine that is over 160 feet deep. The bottom of the ash pond is sitting in the groundwater table, in violation of the Clean Water Act and Federal CCR rules. On October 15th 2016, Duke Energy admitted that the following constituents were detected at levels above the applicable groundwater protection standards during assessment monitoring of the groundwater at the Belews Creek Power Station: Arsenic, Beryllium, Cobalt, Lithium, and Radium 226 and 228, combined. These toxic and radioactive heavy metals are known to cause health concerns that are commonplace in the nearby community such as cancer, heart disease and strokes.

Marshall
The next week after the public information meeting in Belews Creek, where DEQ utilized the table format in lieu of a public forum format, over 500 community members attending the Marshall public hearing immediately rejected the table option and demanded that their concerns be heard in an open forum, and the audience voiced unanimous support for excavation. The community members also expressed health concerns and an urge to protect the state’s natural resources. While Duke will seek permission to pass off the costs of coal ash removal to consumers, the community vocalized their belief the company itself should pay for the clean up.

Cliffside
At the Cliffside public information meeting the next week, DEQ modified the format of the meeting as a result of what happened at Marshall. The format transitioned into a public forum after Assistant Secretary Sheila Holman’s opening remarks. Luis Rodriguez, a Sierra Club organizer, called for DEQ to poll the room— all community members raised their hands for choosing excavation. During the forum, DEQ only responded with roundabout non-answers to each question asked by the crowd, suggesting that DEQ had not thoroughly reviewed the information that was supplied by Duke Energy in their closure plan analysis.

Allen
At the last public information meeting in Belmont, N.C. for the Allen Steam Station, hundreds of community members and advocates came out to hear from and speak to DEQ. During the question and answer session, residents took the opportunity to voice their concerns and call for excavation.

Amy Brown, who lives near the coal ash pond, asked Sheila Holman and the section representatives who stood with her, “How can you justify cleaning up eight [sites in North Carolina] but leave six?”

Brandon Jones, the new Catawba Riverkeeper, asked DEQ to speak to the decision by the Indiana Department of Environmental Quality who recently rejected Duke Energy’s coal ash cleanup proposals for cap-in-place because they do not meet Federal Coal Combustion Residual rules. The crowd was enthusiastic each time a community member would ask DEQ for excavation at the Allen plant and supportive when residents would speak to the numerous health problems caused by living near coal ash contamination.

“You say you’re here to get feedback from the community, but with all of the hearings that the community has participated in and with over 8,000 comments that have been submitted; whose voice is heard?” Amy Brown asked.

A public comment period soliciting input on the coal ash cleanup in the state ended on Feb. 15.

Environmental Justice Concerns
In 2018, the Department of Environmental Quality formed an Environmental Justice and Equity Advisory Board that serves to investigate environmental injustice concerns across the state. At the end of January, the Southern Environmental Law Center sent a formal letter to the Advisory Board outlining the racial and income disparities of several of the communities compared to the surrounding areas, as well as recapping the U.S. Civil Rights Commision statement (after coming to Walnut Cove in 2016) that the percentage of low income individuals and persons of color impacted by coal ash contamination was “disproportionately high.” Read more about the report here.

Duke’s Claims and Distractions
Despite what community members and advocates are calling for, Duke Energy, in all of their rebuttals, consistently return to overstating three points about cleanup plans for excavation: the cost of cleanup, the length of time it would require to excavate and the burden of truck traffic on nearby communities. For all six remaining sites, excavation is the most expensive method, but it will be the cheapest to maintain post-closure. The estimates for each cleanup method also include a 25% contingency for unexpected costs which add to their inflation. However, it’s the only cleanup method that will actually work; the other options are a waste of shareholder and ratepayer money, as they only mitigate the amount of contamination into nearby waterways. Because of this, Duke Energy is scaremongering ratepayers and impacted communities by trying to get the general public to oppose excavation. The public staff of the North Carolina Utilities Commission has openly opposed rate hikes for coal ash cleanup, and the board of the NCUC has rejected rate hikes until the cleanup is complete. Therefore, passing the cost of cleanup to customers is not an inevitability.

Duke Energy is also overstating the time it will take to fully excavate the coal ash at the remaining locations by comparing it to the length of time it has taken to complete excavation that has already happened in North Carolina. However, the coal ash from the four sites that have already been excavated (or are nearing complete excavation) was relocated to somewhere offsite, typically multiple hours away by train or truck. At each remaining site, the coal ash to be excavated would be trucked to a nearby, on-site landfill, and the process would be much more expedient.

Truck traffic is also a concern that Duke Energy is currently highlighting to dissuade communities and the general public from seeking excavation. At each section table at the Belews Creek information session, there was a slip of paper exaggerating the number, frequency and disturbance of trucks that would be needed for excavation without discussing the truck traffic that would be needed for the other two cap-in-place closure methods, which would most likely have comparable amounts of truck traffic—if not a greater amount, especially on public roads—as they bring in dirt for the landfill.

Despite the state legislation and closure plan analyses that favor Duke Energy abandoning their coal ash mess, the DEQ has the power to require full excavation. It is past time for the DEQ to listen to communities—not Duke Energy’s consultants. North Carolinians need Duke to clean up its coal ash and stop the pollution of groundwater, like they did in South Carolina. It is the right thing to do, and it is the only solution that will protect communities nearby and downstream.