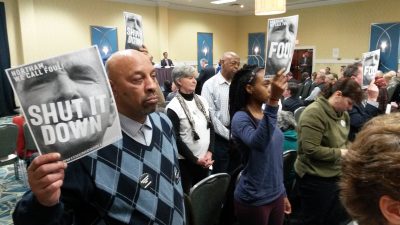 Today’s decision by the Virginia Air Pollution Control Board is “an affront to the citizens of the commonwealth and to the concept of environmental justice.”

The board’s approval came despite evidence presented at the board’s November 8 and 9 meetings showing that the industrial facility would have a disproportionate impact on the low-income community of Union Hill, which is comprised approximately of 85% African-American and was founded by the descendants of freed slaves.

Governor Ralph Northam’s two new appointees to the board, Gail Bush and Kajal Kapur, did not attend the meeting. The seventh member of the air board, Roy Hoagland, stated long ago that he would abstain from voting on the project, citing a conflict of interest.

“This vote serves as further proof that Dominion has bent Virginia’s government to its will. It is an affront to the citizens of the commonwealth and to the concept of environmental justice, which states that no community should bear a disproportionate burden from adverse environmental impacts. We stand in solidarity with Union Hill. This fight is far from over.”