Some cities and counties have terminated their contracts with commercial utilities and formed municipal, publicly owned utilities instead 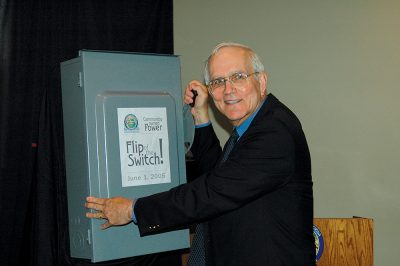 When their contract with Progress Energy expired in 2001, the city of Winter Park, Fla., decided to look into other options for their electricity.

According to Winter Park City Manager Randy Knight, the city decided not to renew their contract with Progress Energy because the utility proposed a “take-it-or-leave-it” 30-year contract that did not include a way out for Winter Park if Progress performed poorly. Additionally, Progress customers were plagued with frequent power outages.

After several years of legal arguments and a local election in which Progress spent $500,000 to influence the vote, in 2003 Winter Park citizens voted 69 percent in favor of dropping Progress and forming a municipal utility. The city’s Electric Utility Department began service in 2005. Municipalization — the process of public takeover of a formerly private utility service — doesn’t always go smoothly.

Citizen group Decorah Power’s effort to get their city of Decorah, Iowa, to look into creating a municipal utility failed by three votes in May, according to the Des Moines Register. Alliant Energy, the incumbent utility, spent over $100,000 campaigning against the measure. Decorah Power plans to try again, but must wait four years due to state law.

Winter Park is one of 19 municipal utilities that have begun operation since 2000, according to the American Public Power Association, a national organization that represents more than 2,000 municipally owned electric utilities. Most states have laws allowing local governments to disengage with an incumbent utility if they are unsatisfied with the service provided. Once a community votes in favor of municipalization, the government negotiates a purchase price to take over existing infrastructure from the utility.

Progress initially set the price at more than $106 million, but the city eventually purchased the infrastructure for $42.3 million. The utility turned its first profit in fiscal year 2007 and now contributes to the city’s general fund.

Currently, residential customers in Winter Park pay less on their electric bills than customers of Duke Energy Florida, which now owns Progress. In May, Winter Park announced they were joining with 11 Florida municipal utilities to build three solar farms from which Winter Park will buy 10 megawatts of power. — By Kevin Ridder