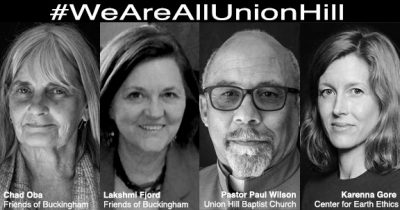 Residents of Union Hill today sent an open letter to the members of the State Air Pollution Control Board urging them to deny the proposed permit for a natural gas compressor station in this predominantly African-American community in rural Buckingham County, Va.

The letter is signed in solidarity by 100 people, including Karenna Gore, director of the Center for Earth Ethics, Tim Guinee, actor and chair of the Climate Reality Hudson Valley Chapter, actors Don Cheadle and Ed Begley, Jr., Rev. Lennox Yearwood, Jr., president of the Hip Hop Caucus, dozens of impacted community residents. It was also signed by Appalachian Voices and many other organizations that represent thousands of Virginians, environmental justice advocates, clean energy supporters and climate activists. (Here is a PDF version of the letter.)

The letter urges the board to allow the public to speak at its December 10 scheduled meeting, before any vote on the permit is taken, and to deny the permit. Their letter concludes: “The legacy of placing toxic facilities in places where they disproportionately affect poor communities of color is unjust and unacceptable and needs acute examination. It is not right to look the other way while this continues.”