Blue Ridge Energy’s solar policies among the worst in Southeast 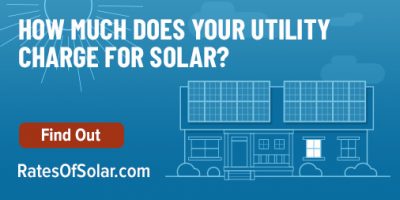 A new interactive website launched this week by the Southern Environmental Law Center highlights Blue Ridge Energy electric cooperative as having one of the worst solar energy policies of all electric utilities throughout the Southeast. The website, “Rates of Solar,” lists Blue Ridge among its solar “brakers” because of its high monthly fee for owner-members who install solar energy on their home. The additional fee, beyond what non-solar residents already pay, is a minimum of nearly $29 per month.

“The added fee that Blue Ridge charges members who want more clean energy and the freedom to invest in their own solar systems is punitive and discriminatory,” said Rory McIlmoil, Energy Savings Program Manager for Appalachian Voices. “That fee alone nearly doubles the cost of a typical solar system over its lifetime. No other electric co-op in the state has as bad of a solar policy as Blue Ridge, so it’s easy to see why they’re being called out for putting the brakes on solar in the High Country.”

Blue Ridge members who have looked into installing their own solar panels have expressed their frustration at the co-op’s policies, according to Appalachian Voices Outreach Coordinator Lauren Essick. “Members want to be able to afford solar, but because of Blue Ridge’s policies, it’s just not cost-effective for them, and they don’t understand why their co-op is making it harder.”

SELC’s full press release is below.

Charlottesville, VA – Today the Southern Environmental Law Center (SELC) launched the Rates of Solar website, an interactive site that provides simple, straightforward information about how utilities across the Southeast are treating customers with rooftop solar on their homes. The website provides easy access to information on more than 400 utility solar policies across SELC’s six -state region.

“With Rates of Solar, we aim to distill complicated rooftop solar policies for hundreds of utilities across the Southeast into simple, compelling stories that resonate with customers, advocates, utilities, and decision-makers,” said Jill Kysor, SELC staff attorney. “This website provides a road map for educating and engaging communities interested in how their local utility stacks up against others when it comes to rooftop solar issues across the region.”

Across the sunny South, people are turning to affordable rooftop solar to meet their energy needs. According to a recent report by the Solar Energy Industries Association, solar capacity is expected to more than double over the next 5 years. Currently the Southeast has over seven gigawatts of solar installed, and another 10 gigawatts of capacity is projected for installation over the next five years. Southerners have some of the highest residential electric bills in the country and going solar is one of the few options consumers have when it comes to making their own energy choices.

“We believe that everyone should have the ability to harvest the sun’s energy at a reasonable price—creating stronger, cleaner, and healthier communities for all,” said Lauren Bowen, SELC staff attorney. “This website provides one of the first comprehensive views of how solar customers are treated by utilities across the Southeast.”

The website’s launch coincides with the release of SELC’s inaugural Solar Makers and Brakers list. The 2018 Solar Makers include Southern electric utilities with current programs and policies that encourage rooftop solar investments. The list also includes the region’s Solar Brakers, or utilities with rooftop policies that undermine, and in some cases, completely put the brakes on solar’s emergence as a feasible, cost-effective, and clean energy choice for customers.

Blue Ridge Energy, which serves 75,000 customers in northwestern North Carolina. Several years ago, this utility began its efforts to undermine customers’ ability to go solar, and Blue Ridge Energy now hits solar customers with a charge of $53 every month – $29 more than customers without solar – severely limiting options for rooftop solar power in its territory.

Alabama Power, which five years ago began imposing a monthly charge on customers who install solar to power some of their energy needs. This unjust charge has put the brakes on rooftop solar by eliminating at least 50 percent of the savings homeowners would see over the lifetime of their rooftop solar system. Residents in Alabama pay the second highest residential electric bills in the country, over $1,700 on average each year. Energy efficiency investments and rooftop solar power are among the only ways families can lower their electric bills. Rather than reduce the solar charge and make solar more accessible for customer bill relief, Alabama Power recently proposed to further increase this monthly solar charge.

The Tennessee Valley Authority (TVA), which wields its authority as both a regulator and monopoly power provider to more than 154 local power companies, mandating that all customers in the Valley who want to install rooftop solar systems at their homes and businesses and contribute to the grid must go through one of two TVA solar programs. These programs give customers a choice between two bad alternatives, both of which seem designed to stifle the growing demand for homegrown solar in the Valley. The result of TVA’s bad policies is Tennessee falling far behind neighboring states.

The 2018 Solar Makers include:

BARC Electric Cooperative, which serves more than 12,500 customers in the Shenandoah Valley of western Virginia. The co-op credits solar customers its full retail rate for the solar power they generate that flows back onto the grid and allows residential customers to install solar systems up to 20 kilowatts in size without imposing monthly solar fees or charges. BARC also introduced the first community solar program in Virginia.

Brunswick EMC, located near the coast of North Carolina, just southwest of Wilmington, serves nearly 100,000 customers. This innovative utility offers a variety of clean energy opportunities to customers. The co-op gives customers full credit at its retail rate for any solar sent back onto the grid. Although the utility charges a low monthly administrative fee, there are no additional solar fees based on a customer’s system size.

For more than 30 years, the Southern Environmental Law Center has used the power of the law to champion the environment of the Southeast. With over 70 attorneys and nine offices across the region, SELC is widely recognized as the Southeast’s foremost environmental organization and regional leader. SELC works on a full range of environmental issues to protect our natural resources and the health and well-being of all the people in our region. southernenvironment.org