A Taste of the Wild 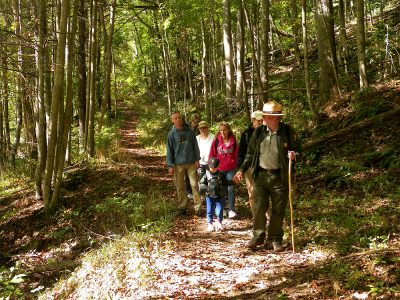 A ranger leads a hike on the Bluestone Turnpike Trail. Photo by Eve West/NPS

To simply walk a trail that is rarely walked by others through untouched land can be a profound experience. Time spent in wild nature feeds my soul and leaves an important imprint on my life, inspiring me to protect these special places. For me, hiking the Bluestone Turnpike Trail was one of these experiences.


The trail runs between Bluestone State Park to the north and Pipestem Resort State Park to the south in southern West Virginia. It is about 10 miles in length and follows the Bluestone River at the bottom of a deep gorge. This section of the river is listed as a National Wild and Scenic River, which grants the highest level of federal protection for free-flowing waterways.

The trail is a relatively undiscovered gem, partly due to its length. There is no camping allowed along it, since it runs through a wildlife management area. My husband Jamey and I decided to set up camp at Bluestone State Park, hike five miles in and back, and then drive the next day to Pipestem and do the same.

When I asked Ranger Ben Leedom at Bluestone if the path was well-maintained, he answered, “We just had a ranger-led hike of the full length two weeks ago, so it should be in good shape.” During warm weather months, periodic guided hikes are offered.

At our campsite in Bluestone, I awoke before dawn to rain on my tent and the most beautiful birdsong I have ever heard. After breakfast, Jamey and I drove past the Old Mill Campground and parked our car at the end of the road. A bright orange gate marks the beginning of the trail. With an umbrella to double as a walking stick, we began our hike.

The trail follows the Bluestone River closely for the first two miles, and its sound is a constant companion. Rock walls flank your right and the river runs to your left. The flora is lovely and lush under the mix of deciduous and conifer trees. These trees and plants hugged us close on each side and arched above us like a living tunnel, making us feel isolated from the rest of the world. Rich birdsong surrounded us, and we saw many different animal tracks on the soft ground of the trail.

After the first two miles, the trail ascends away from the river and narrows considerably. When the path leveled there was a small stream to ford, which was running briskly from the rain, but we easily stepped on stones across it. 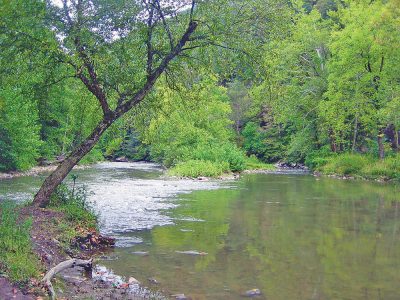 After another mile, a bridge spans a small tributary of the Bluestone called the Little Bluestone. The trail then crosses a dirt road near where the town of Lilly once stood and then rejoins the river, widening and passing through open spaces with a beautiful variety of wildflowers.

As we continued, the rain fell steadily harder. We now walked with tall grasses and wildflowers on each side, but the trail became muddier. After almost five miles in, the path became impassible. We had to turn back despite having come close to our goal.

The next day brought better weather. We drove to Pipestem and took the aerial tram from the Canyon Rim Center 1,000 feet down into the gorge. From the tram the views of the gorge were breathtaking. Below us a stream tumbled down the mountain with a succession of waterfalls. Once off the tram we found the entrance to the Bluestone Turnpike Trail just north of the Mountain Creek Lodge.

This side of the trail had a different feel; it was wide and had less undergrowth, so we could see much further. From its beginning, we gradually climbed until we walked about 50 feet above the river. You could see and hear the rapids below. Many healthy hemlock trees lined the trail and the river. 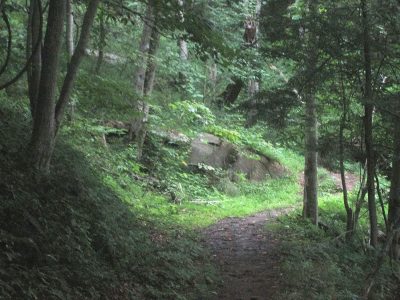 Autumn leaves near the Bluestone Turnpike Trail. Photo by Dave Bieri/NPS[/caption]After we had hiked about two miles, the trail descended to be level with the river. But suddenly the path narrowed with tall overgrowth and deep mud. We found ourselves again at an impasse and had to turn back.

When I thought of Ranger Leedom’s words about the ranger-led hike, I remarked to my husband, “The ranger must have had a machete or a goat in tow to be able to get through that overgrowth!” But he didn’t have to deal with the mud as well. If it had not been for the full day of rain the day before, we would have pressed on also.

All in all, it was a wonderful hike through a lovely river gorge. Once deep into the trail the feeling of walking through a wild area was ever-present, and a great peace followed us in being somewhere where we saw and experienced only a non-human world. As poet Robert Frost once wrote, “Two roads diverged in a wood, and I — I took the one less traveled by, and that has made all the difference.”