Misunderstood Scavengers of the Sky 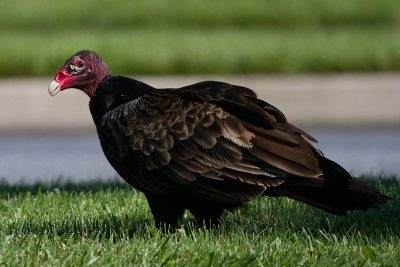 Turkey vultures are the most abundant species of vulture in the Americas and range from Canada to Chile. They play a crucial role in nature by using their powerful sense of smell to locate the carcasses they feed on. Photo by Frode Jacobsen

With anecdotes about them often scary and myths misleading, the turkey and black vultures are some of the most recognizable yet generally maligned birds in North America. But beneath the myths, these raptors are extremely unique, skilled and unconventional scavengers.


The two types of North American vultures are often conflated with one another even though they can be distinguished from afar.

You won’t hear any calls from vultures, as they lack vocal organs to make bird songs. Instead, they hiss or let out a low whine. But by far, it is not their lack of vocal chords that sets them apart: it is the way they eat.

The vulture “exists outside the typical food chain, beyond the kill-or-be-killed law of nature” Katie Fallon writes in her book “Vulture: The Private Life of an Unloved Bird.” Vultures are scavengers, eating only what has already died. Birders and naturalists who are fans of the vulture admire their role in the food chain.

“They are nature’s garbage men,” Rogers says. “They provide a valuable service to mankind.”

While often associated with the death of their meals, they do not hunt actively. Instead, the turkey vulture uses its extraordinary sense of smell to find decaying animals.

The turkey vulture has “large and well-developed olfactory bulbs,” the area of the brain that processes odors, according to Fallon. In contrast, black vultures have a very poor sense of smell, and often follow their turkey-resembling relatives to a carcass.

Contrary to popular belief, circling vultures have not found a carcass yet but are riding warmer gusts of air, called thermals, as they sniff around or scan the ground for food.

Once they settle in for a meal, their naked heads make it easier to eat without getting their feathers dirtied with bacteria. And the bacteria they do consume, which are often associated with diseases such as rabies, are eradicated in their stomach, which is 10 to 15 times more acidic than the human stomach.

Vultures stick out from the rest of the raptors, and while some misunderstand their offputting appearance or diet, bird watchers and lovers admire them for their unmatched abilities and important role in the food chain.

Vulture Culture | Warning: Some facts about vultures are gross