In June, progressives cheered a unanimous vote by the Democratic National Committee for a resolution banning contributions from fossil fuel companies. The text of the resolution raised the spectre of climate change and pegged the political spending of oil, gas and coal companies as a primary cause of inaction. 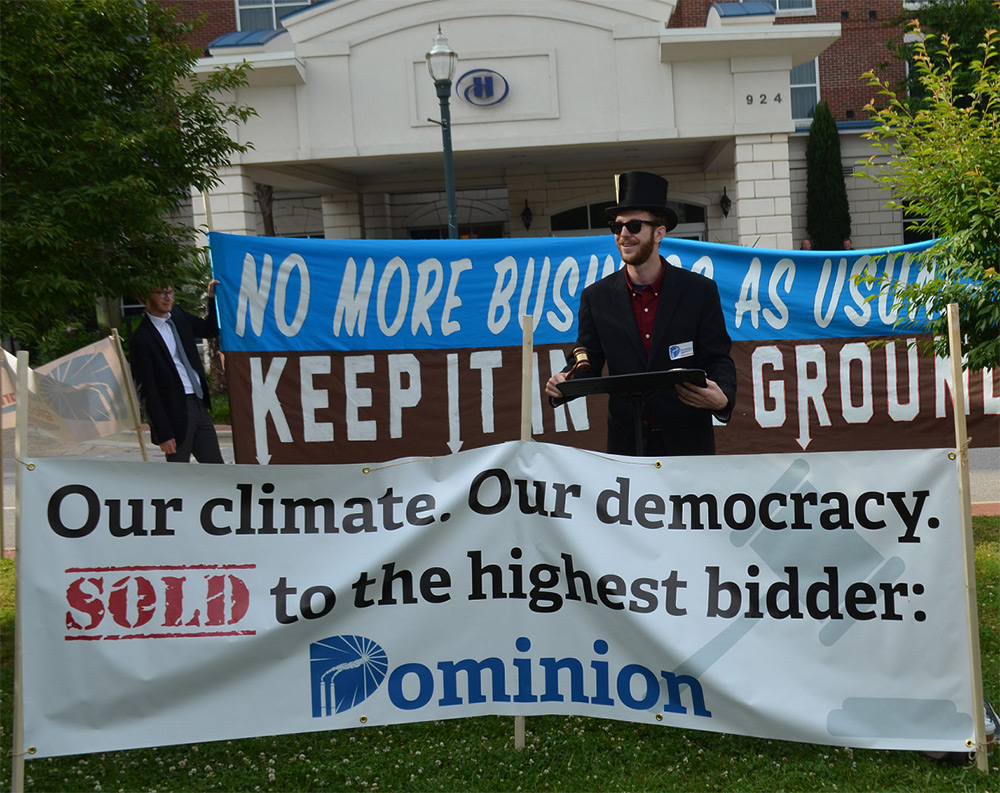 Critics of Dominion Energy traveled to the company’s annual shareholders’ meeting in 2016 to voice their opposition to Dominion’s investment in the Atlantic Coast Pipeline and fracked gas. Photo by Ian Ware/Chesapeake Climate Action Network

Its pitch to the Democratic party machine began, “the American people are looking to Democrats to promote people-powered politics in this era of resistance, revival, and reform but are rightly concerned that their voices are drowned out.”


Just two months after passing the resolution, however, the DNC backtracked. A new resolution, submitted by Tom Perez, the group’s chair, welcomed contributions from workers, labor unions and “employers’ political action committees” in industries “powering America’s all-of-the-above energy economy.” It was viewed by progressives as an implicit reversal of the earlier resolution.

The controversy is a reminder of the complex relationship between energy industries and American politics, as well as those industries’ influence on state and national elections and, by extension, state and national energy policy. In many states today, fossil fuel companies and investor-owned electric utilities are among the largest contributors to political campaigns of both major parties.

Industry influence is a constant in Appalachian and southeastern states. According to an analysis by Public Interest Resource Group, a federation of liberal-leaning nonprofit organizations, three electric utilities — Duke Energy, Dominion Energy and FirstEnergy — were the top corporate donors in 2016 to local, state and federal campaigns in North Carolina, South Carolina, Virginia, West Virginia, Ohio and Pennsylvania.

These regional heavy-hitters draw from similar playbooks when they have a policy to pass or, say, a gas pipeline to build. But modern-day challenges are straining the dated utility business model, and the threats of rising energy costs and climate change are motivating more citizens to fight back. The stakes have arguably never been higher.

“That’s a big part of why they’re so powerful,” says Ivy Main, the renewable energy chair for the Sierra Club’s Virginia chapter. “You’ve got the utility saying ‘if I’m going to be able to provide reliable service I need to do these things.’ That’s a very powerful argument.”

Still, in Main’s view, “Dominion gets away with things that others don’t.”

The Richmond-based company operates as a regulated monopoly in the most populous areas of Virginia, which Goldman Sachs described in 2017 as “one of the top state regulatory environments for utilities” from the investor’s perspective.

Since 2013, the company has contributed more than $1.5 million to legislative candidates in the commonwealth. Over the same period, the recipients of those donations passed laws that allowed Dominion to write off $720 million in earnings due to costs associated with coal plant retirements, storm recovery and the construction of a nuclear reactor that it later abandoned.

Those changes forced utility regulators at the State Corporation Commission to maintain inflated electric rates, when under different circumstances hundreds of millions of dollars in profits exceeding the company’s authorized rate of return would have been refunded to customers.

Dominion then won approval in 2015 for the now-infamous “rate freeze.” Introduced by Republican state Sen. Frank Wagner, and signed by Democratic former Gov. Terry McAuliffe, the legislation barred the commission from reviewing electric utility earnings or lowering rates on the assumption that Dominion and Appalachian Power Company needed the extra cash to comply with then-President Barack Obama’s Clean Power Plan.

But Obama’s effort to curb greenhouse gas emissions nationwide stalled in February 2016 and was quickly overturned by President Donald Trump. Conservatives and liberals united to challenge the rate freeze, which was later shot down by the commission and the Virginia Supreme Court. By the end of 2017, Dominion had pocketed over-earnings of between $700 million and $1 billion of Virginia families’ money.

Political Courage in the Commonwealth

For decades, Dominion has seemed peerless in its power. But even for a utility whose name signifies control, political winds can change.

In the November 2017 election, Democrats flipped 16 seats in the Virginia House of Delegates. Twelve of those newly elected delegates pledged during their campaigns to refuse contributions from Virginia’s utilities as controversy swirled around the Atlantic Coast Pipeline, a $6.5 billion natural gas project Dominion is developing in partnership with Duke Energy.

At the beginning of the 2018 General Assembly season, Del. Sam Rasoul made the case for repealing the rate freeze outright. “This law was a corrupt law,” Del. Rasoul said on the House floor. “We had an obligation to protect the people, and we did not.”

But Rasoul’s call for political courage became the opening argument in a familiar Richmond routine. Because, not surprisingly, Dominion had something else in mind.

Rather than just issuing refunds and restoring rate reviews, the company sought legislative approval of a multi-billion dollar plan to harden the grid. Although it included some incentives for clean energy, the proposal centered on Dominion’s desire to recover the cost of burying power lines from ratepayers, plus a profit. It just needed a legislative decree for the commission to approve those costs “without consideration of their reasonableness or prudence,” as the bill put it.

The effort, again led by Sen. Wagner and backed by Republicans and Democrats, including Senate Minority Leader Dick Saslaw and Gov. Ralph Northam, was fiercely debated. But more than at any time in the past, citizen groups, including Appalachian Voices, the publisher of this newspaper, marshalled public opposition to Dominion’s plans.

In February, at the height of the legislative session, a new initiative called Clean Virginia emerged with the mission of countering monopoly utilities’ influence on the political process.

“The strongest tool we have is that we do not have to do a lot of convincing people that the system is broken,” says Brennan Gilmore, Clean Virginia’s executive director. That brokenness, Gilmore says, “has direct consequences for all Virginians,” from higher electric bills to a lagging transition to renewable energy.

When the dust settled after the General Assembly session, Dominion Energy walked away with almost everything it wanted, but only after an uprising led by House Democratic leader David Toscano and Del. Rasoul stripped the bill of a provision that would have effectively let Dominion charge customers twice for a single investment in the grid.

But Dominion’s latest victory could exact a political cost. In March, Democratic Del. Mark Keam advocated in a Washington Post op-ed for a prohibition on campaign contributions from state-regulated monopolies, and more state and congressional candidates are publicly refusing to accept funds from Virginia’s largest electric utilities.

Meanwhile, Dominion’s lobbying expenses through the 2018 session increased tenfold compared to the previous year. To Gilmore, that defensiveness is a good sign. “Hopefully, next session we’ll see continued [citizen] engagement,” he says. “That’s how democracy is supposed to function.” 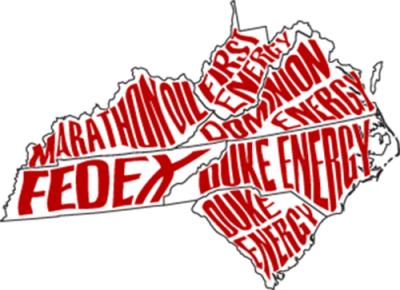 Monopoly Money: Map displays each state’s top corporate political campaign contributor in 2016, according to analysis by U.S. Public Interest Research Group and data from the National Institute on Money in Politics. Map by Jimmy Davidson

Not far behind Dominion, Duke Energy is pursuing its own costly plan in North Carolina to keep shareholders happy through similar means: completing the Atlantic Coast Pipeline and weakening regulatory oversight for investments in the grid. And, like Dominion, Duke’s imprint on the state’s politics is hard to overlook.

North Carolina’s previous governor, Pat McCrory, worked for the Charlotte-based company for 29 years and only sold his stock after the 2014 Dan River coal ash spill. During the 2016 gubernatorial campaign, McCrory’s successor, Gov. Roy Cooper, ran ads attacking his record on coal ash and general friendliness with his former employer that labeled him “the Duke Energy governor.”

Reporting by WRAL-TV shows that Duke spent nearly $8 million in advertising buys in 2016, leading the station to ask why a regulated monopoly with so little competition needed to spend millions of dollars on advertising every year. It’s a public service, according to Duke spokesman Jeff Brooks, who told the Raleigh-area news station that the company wants customers “to understand the work that Duke Energy is doing on their behalf.”

But when WRAL asked independent marketing strategists for their opinion, they saw a few other advantages. “So when they ask for rate increases, there will be less resistance,” one responded. “To insulate them from legislative moves to weaken their monopoly power,” said another.

Last year, Duke Energy began running TV ads with the slogan “Building A Smarter Energy Future” as part of its push to spend $13 billion on grid upgrades over the next decade, $5 billion of which would be spent burying power lines. The plan would increase energy costs for the average household by nearly $4,000 over the 10-year timeframe.

The North Carolina Utilities Commission rejected the plan in June, leading to renewed calls for a more inclusive approach to modernizing the grid. But Duke Energy executives have been upfront about their plans to promote legislation in 2019 that would circumvent the commission.

That could be an uphill battle. In a May poll commissioned by Conservatives for Clean Energy, just 10.5 percent of North Carolina voters supported Duke’s grid investment strategy, while approximately half of self-identified conservatives and liberals favored increasing competition in the energy marketplace.

For Ohio-based FirstEnergy, competition from independent power producers has precipitated a crisis. In April, FirstEnergy Solutions, the company’s power generation business, filed for bankruptcy as renewables and natural gas pushed its coal and nuclear fleet to the economic brink.

Over the past two years, FirstEnergy has petitioned the Federal Energy Regulatory Commission and the Public Utilities Commission of Ohio, and lobbied the Trump administration and Ohio lawmakers, for a lifeline in the form of massive subsidies to prop up the failing power plants.

The company has so far come up short. In August, the bankrupt FirstEnergy Solutions announced that unfavorable market conditions would force it to shut down four coal plants and three nuclear plants, unless the Trump administration steps in.

“FirstEnergy is a particularly odd messenger for that bailout request,” says Dave Anderson, a researcher at the Energy & Policy Institute, a watchdog that exposes misinformation from fossil fuel industries.

Anderson says that utilities including FirstEnergy and American Electric Power have relied on free market rhetoric to oppose state and federal clean energy policies for years. Now that FirstEnergy is against the ropes, “they are trying to pass on the cost of their business model to customers.”

Ohio Gov. John Kasich has opposed those measures, and polling paid for by the Alliance for Energy Choice, a trade group representing independent power producers, found that large majorities of Ohio voters don’t want to foot the bill.

Ohioans are not interested in “paying above-market prices to ensure higher dividends for a handful of companies and their shareholders,” the group’s spokesman told the Cleveland Plain Dealer. But if FirstEnergy can’t convince voters, it seems determined to go around them.

Anderson is tracking the company’s policy agenda and political spending ahead of the vote in November for Ohio’s next governor. FirstEnergy and its lobbyists have donated to each party’s nominee.