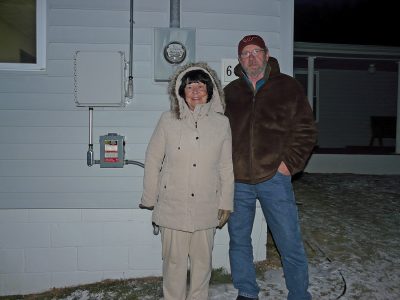 Kathy and Gary Selvage stand by their smart meter in Wise, Va., on the December 2017 day that Sigora Solar completed installation of their 16-panel rooftop solar array. Photo courtesy of the Selvages

On a sunny November afternoon, Kathy Selvage stood in her yard in Wise, Va. Selvage pointed to a house just up the hill from her own, where her mother lived until her passing in 2015, and described her vision of putting solar panels on the roof. Her mother relocated to that house after Kathy’s childhood home, which was a quarter mile away, was sold to a coal company and ultimately demolished.


During the summer of 2017, Kathy and Gary Selvage attended four forums on residential solar power led by the Solar Workgroup of Southwest Virginia, a coalition founded in 2016 and co-convened by UVA-Wise Office of Economic Development & Engagement, People Inc. and Appalachian Voices, the publisher of this newspaper. Kathy Selvage is a former board secretary with Appalachian Voices and is involved in several community and environmental groups.

“It was pretty much near the end [of the forums] when we just said, ‘let’s do it,’” says Kathy.

On that November day, Kathy excitedly shared her and her husband’s plans to move into and put solar panels on her late mother’s home, which was more energy efficient and offered the most solar potential.

“I would call our solar panels our Paris Agreement,” says Kathy, referring to the 2015 international climate change agreement that President Donald Trump announced he was withdrawing from in 2017. “I still feel like it’s really all about energy policy in the United States. I feel like if the country can’t change its energy policy to make a commitment to green energy and understand the place we’re already at in climate change, then the least we can do as individuals is step up and say ‘I know I’m a drop in the ocean but I must do what I can’ … so I think it was a personal commitment.” 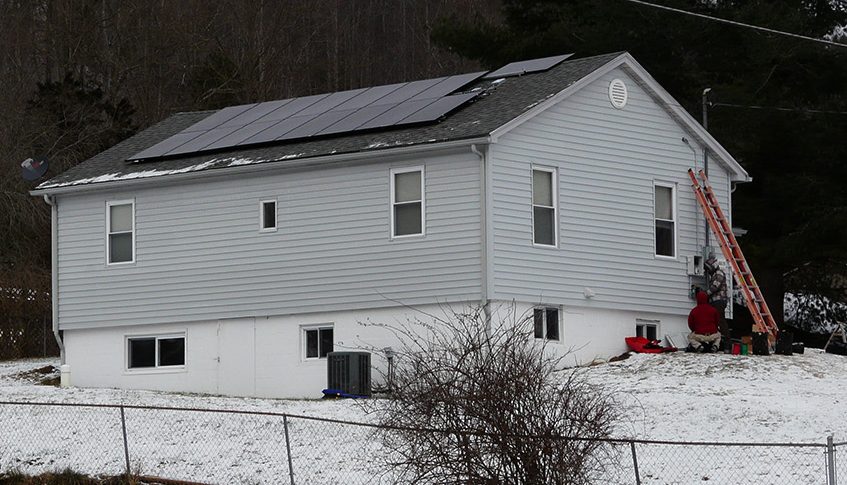 Kathy and Gary Selvages house. Their electricity bills have dropped dramatically since the solar installation; one bill listed a $5 credit in lieu of a charge. Photo courtesy of the Selvages

Now, Kathy and Gary are happily settled into their home, which features 16 solar panels on one side of their roof. The panels get a lot of late afternoon and evening sun, according to Kathy.

When they received one of their electric bills from Old Dominion Power in June, Kathy says she was in “utter shock” at the total of $17.02, explaining that only $5.02 of that was for electricity usage. The remaining $12 was the fixed monthly fee that applies to all ratepayers.

The Selvages are able to take advantage of net metering, which means that if their panels generate more energy than they use, the retail rate for the excess power they generate can be credited to their next bill. This past July, they used negative 36 kilowatt-hours, which was reflected in a credit on their August bill.

Kathy says she knows their bills will rise in the winter, but that their costs will be lower than in years past.

“We’re going to be conservative in our energy usage,” she says. The couple is considering further energy efficiency upgrades to their home that were recommended during a home energy audit. They recently replaced their dryer and are looking into energy-efficient light bulbs and wrapping their water heater.

“I think [the solar panels] are an asset to the home and to its value too,” she says.

However, going solar wasn’t all smooth sailing. The Selvages faced legal issues to prove home ownership, challenges in seeking funding and installation delays due to weather and setting up a smart meter.

“I think that for this part of Virginia, it’s fairly new and innovative,” says Kathy. “It’s been a really long process, but I think it will get easier as more and more people do it.”

Since the Selvages are retired, they did not have enough tax liability to qualify for long-term funding or tax incentives for their project.

“Having come from banking experience, I realize that when you’re dealing with older folks, you are more careful about making long-term loans. So we just chose a three-year loan,” says Kathy.

“This is going to be the most beneficial to those who are young and working, to take advantage of the tax incentives and definitely stretch out that loan through their savings,” she continues. “The way it’s designed, it is not beneficial to older people and I think that’s a terrible group to be leaving out because in Wise County, the older folks are the ones who could benefit most from having lower electric bills.”

Still, the couple reports they are very happy with the way the project turned out. Kathy notes there is room for three or four more panels on their roof.

How to Finance a Solar Project

There are a number of ways to finance solar projects in the United States in addition to the loans and net metering that the Selvages used. One of the most common methods is a power purchase agreement, which allows a property owner to enter a long-term, fixed-rate contract with a third-party solar developer for little to no upfront cost. The developer sells the power generated to the host at a fixed rate that is typically lower than the local utility’s retail rate. While this is allowed in some states, it is banned or restricted in Kentucky, West Virginia, North Carolina and South Carolina.

Federal tax incentives cannot be used by tax-exempt entities to install solar panels. But a power purchase agreement can allow tax-exempt entities like churches and schools to benefit by allowing the third-party solar developer to reap the tax savings and pass those savings along to the nonprofits. However, Virginia law currently prohibits nonprofit organizations from participating in power purchase agreements.

Kilgore’s bill passed unanimously in the Virginia House, but senators voted to delay for one year. Time is running out, as the federal tax credit begins to step down in 2020.

Another financing method is solar leasing, which allows homeowners to install a system for zero money down by entering into a 20-year lease and making monthly payments. This long-term method is not beneficial for older couples, leads to less savings in the long run and requires homeowners to buy out the lease if they move before the term is up. This is allowed in parts of the region, including Georgia, Ohio, South Carolina, Tennessee, Virginia, and, as of 2017, North Carolina.