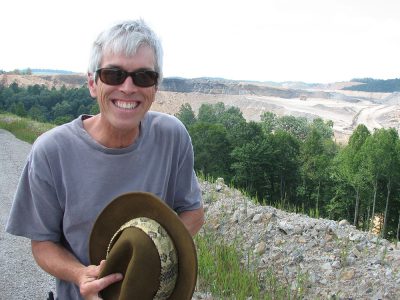 Dr. Ben Stout was moved to tears over the plight of people living near mountaintop removal and coal slurry when he visited the Hobet 21 mountaintop removal site in West Virginia with a film crew for “The Last Mountain” documentary. Photo by Vivian Stockman, ohvec.org

This story was first published by West Virginia Public Broadcasting and has been shortened for The Appalachian Voice. Read the original online at wvpublic.org/post/remembering-ben-stout-environmental-legacy

In August, the region lost a powerhouse of environmental science and advocacy with the death of professor Benjamin Stout. Stout’s work as an educator, an expert witness in the courtroom, as well as his work empowering citizens with science, made long-term impacts regionally and nationally.

Stout was a Wheeling, W.Va., resident and, for the past 26 years, a biology professor at Wheeling Jesuit University. He was a stream ecologist who dedicated his life to science, nature, and above all, community. Ben died of cancer on Aug. 3 at his home in Wheeling, surrounded by his family. He was 60.

Stout revealed some of his deepest convictions related to coal mining practices, a topic especially important to him, in a 2008 documentary called Burning the Future: Coal in America.

Stout spent a large part of his career studying impacts of surface mining on watersheds and nearby communities. He frequently monitored waters surrounding slurry impoundments — ponds built to hold coal mining waste. As coal companies complied with rules to limit pollution from power plants, Stout found more of those pollutants instead wound up in the ponds. In the film, Stout explained that contaminants in the air have mostly been transferred to water, along with increasingly harsh chemicals used to pull the impurities from coal.

Stout was often called as an expert witness in court cases surrounding watershed impairment. Attorney Joe Lovett recalled working with him during a landmark mountaintop removal coal mining case in the late 1990s. The centerpiece of the case was the impacts of surface mining and resulting valley filling practices on surrounding aquatic life.

During the trial, on a snowy February day, Stout guided the federal judge through a stream slated to be buried, and Stout did what he loved most: he waded through the stream finding insects.

“I think the judge appreciated that because he was a fisher, and those insects, mayflies and so forth [were the] very kinds of insects that fly fishers use all the time,” Lovett said. “I think the judge really learned from Ben, and I think that was crucial in winning that case.”

“The courts have this fiction that experts are somehow neutral, like machines. And Ben refused to play along with that,” Lovett said. He said Stout’s outspoken nature would sometimes create problems for him. He said, nevertheless, he admired Stout’s integrity.

“Ben, not only as an expert, but as a human being and somebody committed to protecting the natural world, really taught all of us how to be good advocates and reminded us why we do what we do,” Lovett said.

Stout spoke confidently with judges, lawyers and politicians, but he could also talk just as easily with anyone else.
Stout’s friend and colleague at Jesuit, Mary Ellen Cassidy, worked with him for years studying impacts of slurry impoundments on well water of residents in southern West Virginia. 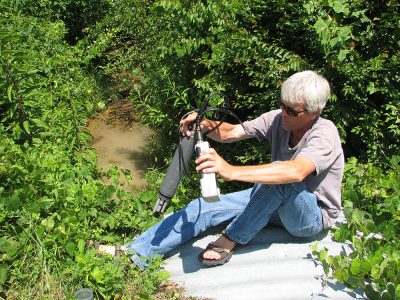 Ben Stout samples water at the Berry Branch tributary of the Mud River near the Hobet mountaintop removal mine. Photo by Vivian Stockman / ohvec.org

“We would end up sitting down at [rural residents’] tables and talking just about everything,” Cassidy recalled.


Cassidy said his ability to connect with people and gather and provide valuable, valid research made it possible to empower communities to affect change. His obituary notes how his work in communities, “led to 500 West Virginia families being connected to a municipal water supply at [the town of] Williamson.”

Stout’s work was also a source of inspiration to his students at Wheeling Jesuit University.

“You couldn’t help but just want to follow in his footsteps,” former student Jacob Keeny said.

“He wanted his students to respect the community first and understand science second. If you couldn’t connect the two, you were hard pressed to get a good grade in his class,” he recalled. “It was about how well you understood what was going on, and how you could solve problems to fix crises that people were going through.”

Keeny remembers his professor would jump at any chance to work with a community in crisis, and that he’d always take students along with him. For Keeny, that meant getting involved during a major chemical spill in Charleston in 2014 that left 300,000 people without water for days.

Stout’s expertise in water testing and innovative problem solving proved to be a valuable contribution. He was hired by a law firm that brought a class action suit over the spill. Because human health studies can take decades to provide conclusive results, Stout and Keeny turned to insect indicator species in streams. They conducted toxicity tests to gauge the potential health effects of MCHM. Exposure to even very low concentrations of the chemical MCHM turned out to be fatal for the insects.

“And I believe that information, that ended up being used in the class action lawsuit and years later, they’ve finally settled that suit,” Keeny said. “And I think people are starting to get a little bit of justice.”