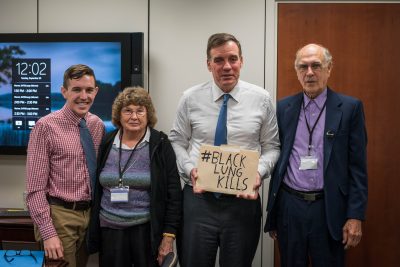 From September 24 to 26, 10 residents of Southwest Virginia traveled with The Alliance for Appalachia, a regional coalition, to Washington, D.C., to speak with senators and representatives in support of miners suffering from black lung disease.

The Black Lung Disability Trust Fund provides medical care and financial support for miners with black lung and their dependents, acting as a safety net when employer benefits are not available. The trust fund is financed by an excise tax on current coal production, but the tax rate is set to be cut in half at the end of 2018 unless Congress acts, placing the solvency of the fund in danger. This comes at a time when rates of black lung have spiked in recent years, and the disease is impacting younger miners than ever before.

“It’s important for Congress to understand that this is more than just a healthcare issue. It’s also an economic issue,” said Councilman Hughes. “People who have sacrificed their health for our country depend on these black lung benefits, and residents of our region do not need another economic barrier.” 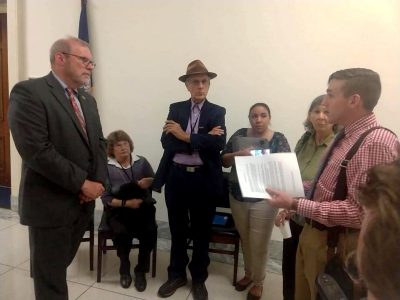 In August, Sen. Warner introduced a bipartisan bill to improve early detection of black lung disease. Currently, no legislation has been introduced to extend the excise tax that finances the Black Lung Disability Trust Fund, but senators and representatives confirmed that the issue is on their radar.

“I’ve been listening to miners and their families about the outbreak of black lung that we’re seeing in Southwest Virginia and across coal country, and it was important to hear also from Councilman Hughes and the advocates from the Alliance for Appalachia,” said Sen. Warner. “This is a public health emergency, and Washington has got to wake up to what’s going on in Appalachia. With steps like my amendment to get more miners into treatment, which will soon become law, I’m hopeful that some of my colleagues are starting to listen, but meetings like this are a good reminder that we’ve got more work to do for our miners.”

The group also spoke with senators, representatives, and congressional staff about the importance of shoring up United Mine Workers of America pensions, as well as passing the RECLAIM Act, a bill which would distribute $1 billion from the existing federal Abandoned Mine Land (AML) Fund to states and tribes across the country to reclaim formerly mined lands in ways that spur new economic opportunities.