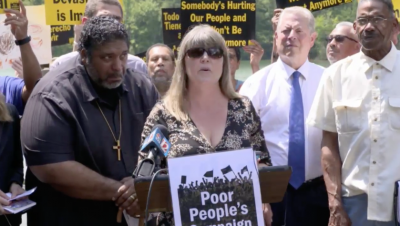 The Poor People’s Campaign held a tour in North Carolina last week that brought together Rev. Dr. William Barber II, campaign co-chair, former Vice President Al Gore, his daughter Karenna Gore and residents of coal-impacted communities from across the state. Their purpose of the tour, organized with other national and local groups, was to highlight one of the four pillars of the Poor People’s Campaign (PPC) that contribute to the perpetuation of poverty: ecological devastation.

The tour kicked off on August 12 with a Sunday service at Barber’s home church in Goldsboro, organized with help from local people including Bobby Jones, who works with both Appalachian Voices and Down East Coal Ash. The service included local residents Michael Carroway and Mindy Hodgins who spoke on how the coal ash ponds from Duke Energy’s H.F. Lee plant continue to impact the health and livelihood of residents in Goldsboro. 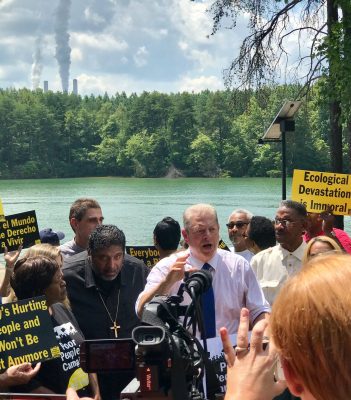 The next day started in Walnut Cove with a meet-and-greet with Rev. Dr. Barber and the Gores held at Rising Star Baptist Church, followed by a press conference at Belews Lake with smokestacks of Duke’s Belews Creek Steam Station in the background. Appalachian Voices’ N.C. Program Manager Amy Adams and board member David Hairston, and several impacted community members, had an opportunity to speak with Rev. Dr. Barber, Karenna and Al Gore. (See a video of the full press conference below.)

David Hairston spoke passionately about his role in the Belews Creek community by telling the crowd: “I’m the person that the community calls when they are afraid to bathe their children in contaminated well water.

Rev. Dr. Barber spoke to the solutions and the lack of political accountability in North Carolina.

“We know we can fix this. Tomorrow the [N.C. legislature] could hold a special session and pass legislation that would require Duke Energy to clean up coal ash on their own money and not charge you anymore. They could hold a session to halt pipelines. They could decide that North Carolina is going to focus on solar energy. It is immediately within the possibility of chance and change.”

Al Gore wrapped up the press conference by speaking to the dangers of harmful energy production and its effect on the climate as well as local communities.

“I want to draw connections between Belews Creek and the coal ash pollution and the gaseous pollution that is threatening to make our entire planet the kind of mess they’ve made here. On a peak day, this plant over here burns 220 rail cars full of coal. What is left over when they burn it is this toxic coal ash. If you had all these millions of tons of a toxic substance and you just dug a raw gash in the ground and left it there, you would be behaving recklessly. That’s what they’re doing. This is a crime scene.”

Later that evening, the tour concluded at the historic Shiloh Baptist Church in Greensboro. Residents from across the state who face a range of issues — from the threat of proposed fracked-gas pipelines to environmental contamination from coal ash, as well as those fighting for community solar in vulnerable communities — all had a chance to speak from the stage, standing with Gore and Rev. Dr. Barber, to the audience of more than 200. A video that Appalachian Voices put together for Walnut Cove-based Residents for Coal Ash Cleanup, “At What Cost,” was shown.

Appalachian Voices is holding a community cookout this weekend with the Poor People’s Campaign and looks forward to working with the organization to promote a greater awareness of environmental and justice issues in North Carolina.