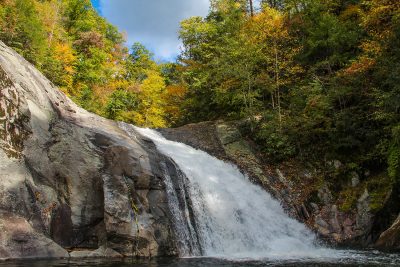 One way to see the falls is through a fairly easy 1.75-mile hike on the Harper Creek Trail. When the trail splits, take the Raider Camp trail on the left, and go left again to see Harper Creek Falls from above. There is an unofficial scramble trail to the base of the falls and a popular swimming hole. Another side-trail scramble requires utilizing an old climbing rope that could be in poor condition to reach a pool between the second and third tier of the falls. Please exercise extreme caution and do not bring small children or dogs.

For a longer trek, follow the Mountains to Sea Trail north from the Harper Creek Falls overlook. From here on, there will be several creek crossings. Turn left at the next four junctions. When you reach the fifth fork, keep straight to access a cliff overlook with spectacular views of South Harper Creek Falls and Grandfather Mountain. Retrace your steps back to the Mountains to Sea Trail. This loop is 10.9 miles. A detailed Wilson Creek Area map and strong navigation skills are recommended.
There are several primitive campsites along the path. — By Hannah Gillespie 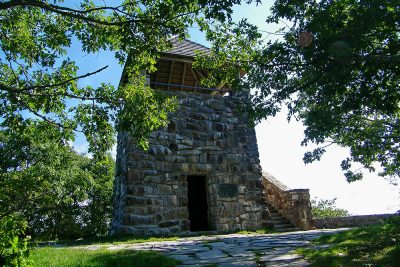 Just outside of Franklin, N.C., in the Nantahala National Forest is Wayah Bald. With an elevation of 5,342 feet, the bald’s elevation offers beautiful views stretching to the Great Smoky Mountains in Tennessee and into Georgia, North Carolina and South Carolina.

The Wayah Bald is an accessible, family-friendly recreation option with picnic tables and a paved path leading to the lookout tower.

For many, the attraction to Wayah Bald is the 53-foot lookout tower built in 1937 by the Civilian Conservation Corps. Climbing to the top of this tower reveals stunning views of the southern Appalachian Mountains. There are signs on the tower with historical information about the structure and the surrounding mountains it was built to protect from wildfire. The Appalachian Trail and the Bartram Trail also cross the bald near the tower.

For more adventure, stop at the Wilson Lick Ranger Station first. Built in 1913, this ranger station was the first in the Nantahala National Forest. Today it features an information kiosk with the history of the ranger station, area forestry and Wayah Bald. From there, you can hike three miles northbound on the Appalachian Trail to the Wayah Bald Lookout Tower. — By Sara Crouch