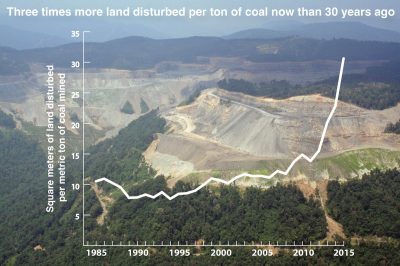 In a peer-reviewed study published on July 25 in PLOS ONE, researchers from SkyTruth, Duke University, and Appalachian Voices released the first-ever maps of the year-by-year footprint of surface coal mining in Central Appalachia. The study, coupled with an earlier dataset, revealed that surface mining, including mountaintop mining, has been responsible for clearing 5,900 km2 (approximately 1.5 million acres) of land between 1976 and 2015 — equivalent to one out of every 14 acres in Central Appalachia. This total area is roughly three times that of the Great Smoky Mountains National Park.

In addition, the study found a drastic increase in the ratio of land cleared to tonnage of coal produced over the last three decades. In the 1980s, approximately 10 square meters of land were disturbed per metric ton (2,200 pounds) of coal produced. By 2015, approximately 30 square meters were disturbed to produce the same amount of coal — a threefold increase. The study noted that these findings are consistent with the depletion of coal reserves in Central Appalachia.

“The thickest, easiest-to-access coal seams in Central Appalachia have largely been mined out,” noted Matt Wasson, Appalachian Voices director of programs, “so every new mine is mining thinner seams and having to blow up more mountain to get to them.”

The research team utilized the cloud-based Google Earth Engine to analyze and process more than 10,000 individual satellite images. Their model identified areas that lacked forest cover in contrast to surrounding forested areas on a yearly basis. After excluding known roads, bodies of water and cities, the team labeled any remaining deforested areas as likely surface mines, validated by manually spot-checking the results against aerial survey photography and other imagery. The semi-automated nature of the analysis allows the dataset to be updated annually. Visit appvoices.org/new-map to learn more and view an interactive map.