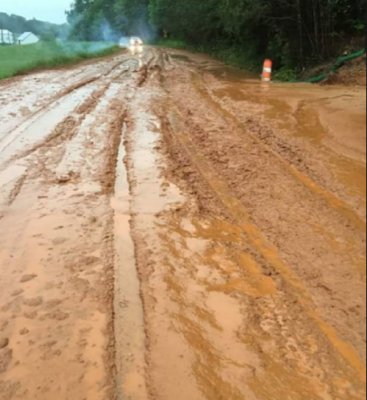 Photo of mud across Cahas Mountain Road near construction of Mountain Valley Pipeline in Franklin County, May 2018. Photo from Roanoke Times website.

RICHMOND, VA — Today, lawyers for a coalition of environmental advocates including Appalachian Voices filed a motion for stay, asking the United States Court of Appeals for the Fourth Circuit to put an immediate stop to the construction across waterways of the fracked-gas Mountain Valley Pipeline (MVP). Because MVP’s own documents show it cannot meet the conditions required under its “nationwide 404 permit,” the streamlined permit issued by the Army Corps of Engineers is illegal.

Today’s filing comes less than a month after West Virginia regulators cited MVP for failing to control erosion and just days after several inches of mud ran off MVP construction sites and blocked a road in Franklin County, Virginia.

Under section 404 of the Clean Water Act, the Corps is charged with issuing a permit for the pipeline’s stream crossings that allows the project’s builders to trench through the bottom of those streams, including the Greenbrier, Elk, and Gauley rivers, and fill the crossings with dirt during construction of the pipeline. The permit issued to MVP by the Corps is commonly known as a “nationwide permit 12,” which takes a one-size-fits-all approach and is generally viewed as fairly limited in scope to be used for projects much smaller than ones the magnitude of the MVP, a 300-mile-long, 42-inch pipeline requiring a 125-foot right-of-way construction zone that would cross streams, rivers and other waters in West Virginia and Virginia more than 1,000 times.

One condition of the nationwide permit is that if even one water crossing in a project is ineligible for the permit, it cannot be used for any of them. Another condition is that MVP cannot take more than 72 hours to complete construction across a stream or river. Since MVP has said the 72-hour limit would not give them enough time to complete construction across four important rivers, they cannot use the permit for any of the other water crossings along the pipeline’s route.

The request for stay was filed by Appalachian Mountain Advocates on behalf of a coalition made up of the Sierra Club, Appalachian Voices, Indian Creek Watershed Association, West Virginia Rivers Coalition and Chesapeake Climate Action Network.

“This is more evidence that state and federal agencies, along with the project applicant, cut corners at every opportunity. We remain adamant that blanket general permits cannot protect water quality from construction impacts of the massive Mountain Valley Pipeline across steep, erodible terrain and hundreds of streams and wetlands as required by law.”

“We have repeatedly warned the Army Corps of Engineers that their one-size-fits-all approach to this dirty and dangerous project doesn’t even come close to fulfilling their responsibility to protect our people and communities. The fracked gas Mountain Valley Pipeline is already having devastating effects on our water and communities, and all construction on it must be immediately stopped. This unnecessary project serves no purpose except to line the pockets of the polluting corporations that have been exploiting our communities for generations.”

“When the state punted to the Army Corps its responsibility to oversee water quality impacts, West Virginia officials assured the public that the pipeline’s “environmental impacts will ultimately be zero.” In reality, the environmental impacts of this unneeded and unnecessary fracked-gas pipeline were felt almost immediately after construction began. The Army Corps’s blanket permit cannot protect West Virginia and construction must be stopped until regulators can ensure that West Virginia’s streams and rivers will be protected.”