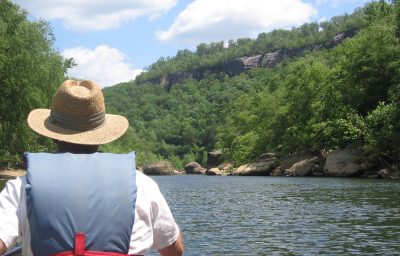 A paddler enjoys one of many outstanding rivers in East Tennessee.

Nashville, Tenn. – Today, 20 environmental and community organizations delivered a letter to Tennessee Governor Bill Haslam urging him to veto legislation approved by the state House that would significantly weaken protections relating to coal mining in Tennessee. The legislation would transfer authority to regulate coal mining from the federal Office of Surface Mining, Reclamation and Enforcement (OSMRE) to the state’s Tennessee Department of Environment and Conservation (TDEC).

The groups argue that not only is the state ill-equipped to handle such a transfer of authority, but it would place an extra burden on taxpayers, as well.

The groups find that TDEC’s existing enforcement of coal pollution protections under the Clean Water Act fails to protect the safety and quality of Tennessee waterways. In fact, TDEC has not taken a single enforcement action against a coal mine in the last two and a half years, despite ongoing pollution concerns, lawsuits and other appeals.

“We are putting at risk 30 years of water quality improvements in Tennessee’s watersheds,” said Landon Medley, member of Statewide Organizing for Community eMpowerment.

“TDEC can’t take on the burden of overseeing the inspection of coal mining operations in Tennessee with limited resources and staffing to cover the monitoring, inspection and enforcement mandated by the bill,” added Tonia Brookman, director of the Woodland Community Land Trust in Campbell, County. “Small, rural communities have been devastated for too many years with legacy coal sites and we should not be expected to use our taxpayer dollars to needlessly transfer this program. It’s time we begin to move forward in creating a more prosperous community instead of relying on the coal industry, which has left us with many years of destruction.”

The groups say that taking away federal authority to enforce the many protections under the federal Surface Mining Control and Reclamation Act — including reclamation of mine sites, complex hydrologic determinations, endangered species protections, lands unsuitable for mining provisions and abandoned mine reclamation — would put an unfair burden on Tennessee taxpayers. To effectively enforce clean water protections under SMCRA, the state would have to hire hydrologists, geologists, inspectors and other staff to create an entirely new bureaucracy that would replace the existing federal office based in Knoxville.

Finally, conditions afflicting the coal industry are due to market forces, not regulation, and would not be improved by bringing the enforcement of those protections under state control, the groups say.

“The coal industry has been in steep decline around the country for several years because it’s being outcompeted by other energy sources,” said Erin Savage, Central Appalachian Program Manager for Appalachian Voices. “Rather than implementing a new mining program in an ill-conceived effort to bolster coal, the state should be spending time, energy and money on mined land reclamation and economic diversification in communities that can no longer rely on coal.”

National and global economic factors are forcing companies to reconsider their investment in coal from places like Appalachian coal mines. This constellation of factors, when taken together, will lead to no improvement for the coal industry in Tennessee, while costing Tennessean taxpayers more money, and causing further damage to the state’s environment, waterways and communities.

Groups signed onto the letter are: