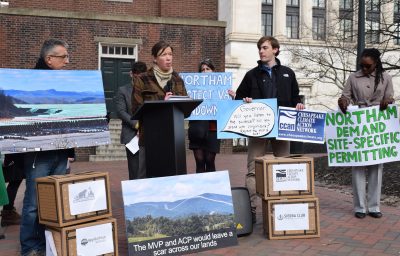 Lara Mack, Virginia Field Organizer with Appalachian Voices, speaks at a press conference in Richmond, Va., March 27, 2018, calling on Gov. Northam to protect citizens from the impacts of the Atlantic Coast and Mountain Valley pipelines.

At a press conference at the Bell Tower on Capitol Square, citizens presented the Northam administration with more than 10,000 petition signatures from petitions signed by more than 10,000 Virginian residents. The signatories call on the governor to protect the drinking water supplies of countless Virginians from the Mountain Valley and Atlantic Coast pipelines, which would cross streams and other waters more than 1,400 times across the state.

The group also presented a petition from Change.org with more than 62,000 signatures from other concerned citizens from around the country calling on Governor Northam to reject the pipelines. In addition to the projects’ tremendous climate impacts that affect all Americans, the projects bisect national treasures including the Blue Ridge Parkway, the Appalachian Trail, and many miles of national forest land.

The petition demands that the Northam administration immediately halt the ongoing tree-felling along the routes, allow the public to review and comment on the erosion and stormwater control plans before they are finalized by the DEQ, and take action to ensure the state analyzes individual stream impacts, rather than the Trump administration’s Corps of Engineers.

Just yesterday evening, at 7 p.m., the DEQ announced it had finalized the water plans for the Mountain Valley Pipeline, authorizing the start of land-disturbing activities, without letting the public have one last chance to provide feedback on the critical water pollution plans.

“Citizens all along the MVP route have spent years educating themselves about this project and its potential impacts — everything is at stake for them. They’ve been asking Gov. Northam and his administration for one more chance to review these critical water pollution control plans before the DEQ finalized them and allowed construction to proceed. In an affront to all Virginians, this decision shut them out,” said Peter Anderson, Virginia Program Manager with Appalachian Voices.

“My question for Governor Northam is simple: did you really mean it when you said the DEQ reviews had to be thorough, transparent, and based on science? The science is clear – these projects will be the most damaging for Virginia’s waters in decades. It is time to turn your words into action,” said David Sligh with Wild Virginia.

“Governor Northam promised to hold these dangerous pipelines to the highest environmental standards,” said Jamshid Bakhtiari, Virginia Field Coordinator at the Chesapeake Climate Action Network. “Now, we’re seeing him already go back on this promise. The DEQ will allow the Mountain Valley Pipeline to begin construction, threatening the communities of countless Virginians, without allowing for any further public input. These pipelines will lock us into fossil fuels for decades if Governor Northam doesn’t take action. Thousands and thousands of concerned residents in Virginia — and across the country — are watching.”

“The plans approved for the Mountain Valley Pipeline are not environmentally sound and, from an engineering standpoint, will not sufficiently protect the environment and our drinking water from the pipeline’s construction impacts,” Kirk Bowers, a licensed engineer and Pipelines Program Coordinator for the Sierra Club Virginia Chapter, said. “Sierra Club had to utilize a Freedom of Information Act request in order to fully review the plans and come to these conclusions. Leaving those in the public without the financial and legal resources to use the FOIA in the dark is absolutely unacceptable. All Virginians should have had a chance to review and evaluate these plans for the Mountain Valley Pipeline and should get the chance for the Atlantic Coast Pipeline.”

At the press conference, the citizens handed the petitions to the Administration’s office. They held different color survey tape to show the average 125-foot width of pipeline tree-felling and construction, and the 50-foot permanent right-of-way that will scar hundreds of miles of mountains, farms and fields through the commonwealth. They also held several large posters with pictures showing some of the places the pipelines will impact as well as pictures of failed erosion controls on other pipeline projects in mountainous terrain.