From the size of our electric bills to the comfort of our homes, energy efficiency can play a big role in the quality of life of anyone with a roof over their head.

Though energy efficiency improvements also result in lower carbon emissions from power plants, that benefit tends to sit at the bottom of the priority list for those of us needing new insulation or a better HVAC system.

But using energy efficiency to reduce power plant pollution isn’t just a feel-good notion for the earth-loving college kids next door. That pollution has a direct impact on the health of our lungs, heart and brain.

The particulars lie in something known as fine particulate matter, tiny pollutants that get trapped in our lungs and can enter the bloodstream. These pollutants end up in our air when chemicals like sulfur dioxide and nitrogen oxide (emitted by automobiles, industry and coal-fired power plants) react in the atmosphere. Exposure can lead to various chronic illnesses and shortened life expectancy, especially for our most vulnerable populations.

Because the impacts of power plant pollution are so detrimental, energy efficiency offers an enormous opportunity for improving public health in the United States, as shown in a recent report by the American Council for an Energy-Efficient Economy (ACEEE).

The ACEEE study, “Saving Energy, Saving Lives: The Health Impacts of Avoiding Power Plant Pollution with Energy Efficiency,” found that a 15 percent reduction in energy use nationwide would result in more than six lives saved each day, 30,000 fewer asthma episodes and up to $20 billion in avoided health costs that result from exposure to power plant pollution all in the first year. 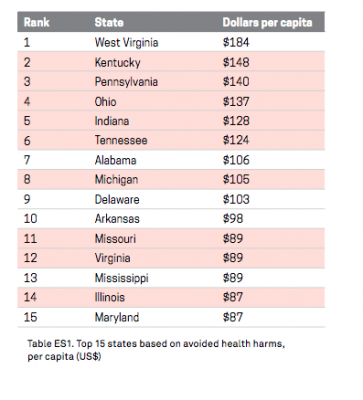 States that rely heavily on coal including West Virginia, Kentucky, Ohio and Tennessee were in the top 15 for having the potential to save the most money per person through avoided health impacts and costs.

Unsurprisingly, energy efficiency was also found to be the most cost-effective method for controlling power plant pollution, since it costs less to reduce energy waste than it does to produce electricity and then mitigate the resulting pollution using scrubbers and other technology.

Energy efficiency benefits the public in a number of ways — from reducing the percentage of income we spend on our electric bills to improving the quality of the air we breathe — and studies like this one highlight why energy efficiency should be a key part of our conversations about public health. Across the board, more policies are needed to provide energy efficiency to populations that need it most.