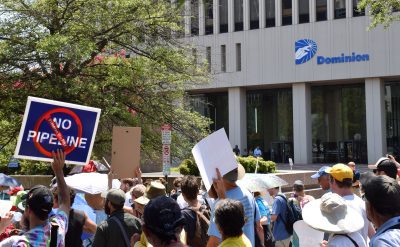 This column was published in the Richmond Times-Dispatch’s opinion page on January 22, 2018.

In a testament to the power that Dominion Energy, the state’s largest corporate political campaign donor, is accustomed to wielding in Richmond, the commonwealth has earned a dubious distinction: Goldman Sachs recently praised Virginia for having “one of the top state regulatory environments for utilities in the U.S.”

The key phrase is for utilities, since Goldman, of course, was speaking from the utility shareholders’ perspective. But what’s best for Dominion’s bottom line is not necessarily best for the rest of us who are known in utility-speak as “ratepayers.” The same goes for people literally standing in the way of Dominion Energy’s quest for continued dominance — the farmers, homeowners and small businesses in the path of the company’s proposed Atlantic Coast Pipeline.

Dominion’s impressive profits stem from its great success at shaping the laws governing its activities. Now, in the face of a changing energy landscape where solar power generated by homeowners and small businesses threatens its business model, and widespread public outrage over both the Atlantic Coast Pipeline and the several hundred million dollars the utility has overcharged ratepayers since securing the controversial “rate freeze” from the legislature in 2015, the company is back at the General Assembly asking for more special treatment.

Monopoly utilities like Dominion make large profits by investing billions in generation, transmission and distribution projects, then charging ratepayers to recoup costs, plus a guaranteed rate of return generally between 10 and 13 percent. And the investment is no-risk, since it’s ratepayers who are holding the bag.

Since Dominion operates without any market competition and is guaranteed to make money whenever it spends money — earning a guaranteed profit of at least $100 million from ratepayers for every billion it spends — it’s essential that the SCC review every expenditure the company proposes and approve it only if the commission’s independent analysis shows that it serves the public interest. The laws governing utility regulation require just that.

After two years with the utility raking in extra profits, the rate freeze is finally considered beyond the pale politically. Dominion needs a new way to skirt this oversight, so it’s asking the General Assembly to, among other things, create a new system of accounting that short-circuits an essential part of the commission’s review, and mandate that certain types of projects are in the public interest.

At the polls last November, Virginians sent an unequivocal message that they will no longer tolerate politicians’ acquiescence to the power monopoly’s demands. Thirteen delegates elected to the House bucked convention and prominently pledged to not accept campaign money from the utility. They’re not alone; Lt. Governor Justin Fairfax did the same.

The company’s business model is completely dependent on special privileges conferred by the government. It enjoys a state-granted monopoly on electricity sales in the commonwealth’s most populous areas and a legislature that has defended its interests against the SCC. In another arena, if it succeeds in obtaining permits to build the controversial $5 billion Atlantic Coast Pipeline, it plans to use the government’s power of eminent domain to condemn the property of landowners along the route who refuse to sell. These extraordinary powers are dangerous if misused, and we rely on our democracy to ensure that they are not.

It’s high time for our elected representatives to finally say ‘no’ to Dominion when it comes to them demanding more power over our lives and future for the sake of shareholder profits.

Tom Cormons is executive director of Appalachian Voices, a nonprofit working at the nexus of America’s energy transition. Contact him at tom.cormons [at} appvoices.org.