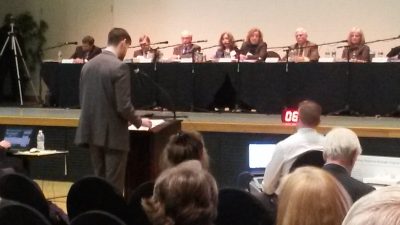 Peter Anderson of Appalachian Voices addresses the Va. State Water Control Board regarding the Atlantic Coast Pipeline on Dec. 12, 2017

Richmond, VA –A coalition of community and conservation groups, including Appalachian Voices, late yesterday filed a legal challenge in federal court of the Virginia State Water Control Board’s approval in December of a water quality certification for the proposed Atlantic Coast Pipeline.

While the board’s decision postponed the effectiveness of the certification pending completion of important studies, Virginia has treated the decision as final. The groups had to file this challenge now to meet a deadline under state law. In its current state, the certification does not adequately assess the impacts of the project on water quality in Virginia sufficiently to meet the requirements of the Clean Water Act.

“This is one in a long series of bad decisions that shines a light on the systematically flawed review process for this dangerous project,” said Executive Director Lew Freeman of the Alleghany Blue Ridge Alliance, which represents a number of the plaintiff organizations. “A pipeline that cuts through Virginia’s precious rivers and streams should be held to the highest standards and the people of the Commonwealth deserve that protection.”

The State Water Control Board voted 4-3 to approve a water quality certification for the Atlantic Coast Pipeline even though the Department of Environmental Quality (DEQ) failed to provide the critical information the board needed to ensure water quality will be protected in Virginia. This challenge filed by SELC and Appalachian Mountain Advocates on behalf of a strong coalition initiates judicial review of the decision in federal Fourth Circuit Court of Appeals in Richmond.

“The Virginia State Water Control Board had a clear duty to look at all potential impacts to state waters from the Atlantic Coast Pipeline and make sure our water quality standards are upheld. Instead, the board went along with the DEQ’s approach of arbitrarily segmenting its review and shirking its legal duties,” said David Sligh, Conservation Director of Wild Virginia. “This approach was clearly constructed by DEQ to avoid the conclusion that would come from a scientifically valid assessment – that this project cannot be built as proposed in a way that protects our waters and our communities.”

The board may have another opportunity to deny certification once DEQ completes review of several critically important plans submitted by Atlantic Coast Pipeline LLC. DEQ has not made public the timeline for when that information will be available, and it has stated that there will not be an opportunity for public comment. The groups hope to continue to work with the new Northam administration to address the problems with the water quality certification process for the Atlantic Coast Pipeline.

In related actions, SELC today filed on behalf of the Sierra Club, Defenders of Wildlife and Virginia Wilderness Committee a legal challenge to a decision by the U.S. Fish and Wildlife Service, and a legal challenge on behalf of the Sierra Club and The Virginia Wilderness Committee to a decision by the National Park Service. The agencies both issued permits for the pipeline. These decisions further highlight agency failures to adequately review crucial information in a process that is being driven by developers rather than regulators.

“From the very start of this process, Dominion Energy has pressured state and federal regulators charged with protecting local communities and the environment to quickly approve its project, despite the risks to landowners and natural resources and despite widespread public opposition,” said SELC Senior Attorney Greg Buppert. “As this challenges demonstrates, it’s clear these agencies must fundamentally reevaluate the Atlantic Coast Pipeline and their processes that failed to thoroughly and properly evaluate this project and its impact.”

The U.S. Fish and Wildlife Services’s Biological Opinion granted developers the ability to move forward with the project despite its impact on endangered bats. The opinion, which specifically permits harm for a “small percentage” of bats, is not in keeping with the law, which requires the agency to more accurately determine the number of endangered species developers are allowed to harm.

“We depend on the Fish and Wildlife Service to ensure that endangered species are not unjustifiably harmed,” said Nathan Matthews with the Sierra Club. “They’ve fallen far short of their obligation here.”

The final legal challenge from SELC targets the National Park Service’s issuance of a permit to allow the pipeline to cross beneath the Blue Ridge Parkway. Constructing the pipeline would have long-term impacts on the Parkway’s viewshed.