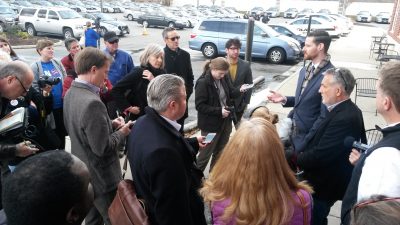 Peter Anderson, Virginia Program Manager with Appalachian Voices, talks to press after the State Water Control Board vote on the Atlantic Coast Pipeline on Dec. 12, 2017

The Virginia State Water Control Board today approved a heavily amended certification for the proposed fracked-gas Atlantic Coast Pipeline that is conditional on getting outstanding information from state regulators about the project’s impacts to water quality. The board voted 4-3 for the certification after a day of vigorous vocal opposition from citizens who have been fighting the pipeline for years. By some accounts, it was the most active, controversial water board meeting in decades.

Yesterday, some 100 people spoke against the project – mostly landowners and experts opposed to the pipeline based on its unprecedented impacts on streams, rivers, drinking water supplies, wetlands and groundwater in the commonwealth. In addition, the state received some 15,000 comments from citizens this summer, overwhelmingly in opposition to the pipeline.

The certificate approved today will apparently not be effective until the Department of Environmental Quality has provided all outstanding information and the board determines the project would not violate clean water standards. The move follows the board’s vote last week approving the equally controversial fracked-gas Mountain Valley Pipeline, but without the conditional approval.

Appalachian Voices along with other organizations and countless community groups and citizens along the routes of the proposed pipelines have been fighting the controversial projects since they were announced in 2014. Thousands have voiced their opposition to both these pipelines based on evidence that they cannot be built without violating the federal Clean Water Act and the board’s obligation under Virginia law. Appalachian Voices and many others highlighted repeatedly that DEQ failed to provide the board with critical information, including erosion and stormwater control plans and analysis of individual water crossings. This information is fundamental for the board to make a rational decision about the projects’ impacts to our waters. 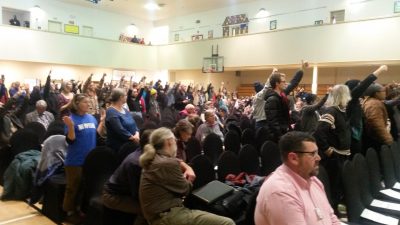 Pipeline opponents show their support for one of the dozens of speakers at the State Water Control Board meeting on the proposed Atlantic Coast Pipeline on Dec. 12, 2017

“We are somewhat encouraged by the depth and scope of the board’s discussion about several critical issues today and their apparent recognition of the thousands of citizen voices they’ve heard from over the years, but we are disappointed they did not deny this deficient certification and remand it back to the Department of Environmental Quality for a thorough analysis.

“We are also very disappointed the board rejected a formal petition it received yesterday to reconsider its approval of the equally deficient Mountain Valley Pipeline last week.

“We applaud the efforts of several board members who expressed concern that the draft ACP certification would not provide reasonable assurance, as required by law, that water quality would be protected. We particularly commend members Roberta Kellam, Nissa Dean and Robert Wayland for casting dissenting votes and seeking to deny the certification outright.

“We are confident the record demonstrates construction of the pipelines would violate the law. On Friday, we filed a legal challenge to the Mountain Valley Pipeline, and we are considering all options for this project as well. If either pipeline company breaks ground, citizens along the routes are prepared to watchdog every action, along every mile, every day of construction and afterwards, and compel agencies to act when violations inevitably occur.”