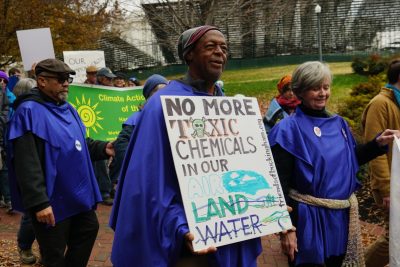 Citizens protest the Mountain Valley and Atlantic Coast Pipelines at the Water Is Life Rally in Richmond, Va., on Dec. 2.

Today, the State Water Control Board approved the permit for the proposed fracked-gas Mountain Valley Pipeline that would run 300 miles from West Virginia through six counties of Virginia.

The 5-2 vote came after a full day of public comment yesterday from about 85 people, almost all of them of landowners and experts arguing against the pipeline based on its unprecedented impacts on streams, rivers, drinking water supplies, wetlands and groundwater. Communities and organizations have been fighting the controversial project since it was first proposed in 2014.

“We are thoroughly disappointed by the board’s decision. Thousands voiced their opposition to this pipeline based on evidence that it cannot be built without violating the federal Clean Water Act and the board’s obligation under Virginia law. DEQ created a rushed, haphazard process, limited the scope of the board’s review, and abdicated the state’s authority to the Corps of Engineers for oversight of pipeline construction at almost 400 water crossings.

We applaud the efforts of several members who expressed concern that the draft permit does not provide reasonable assurance, as required by law, that water quality will be protected and, in particular, we applaud members Nissa Dean and Roberta Kellam who cast the two dissenting votes.

“The board should have rejected the permit today because they lacked enough information to make a reasoned decision. Instead, it approved an utterly deficient permit.

“The record demonstrates that this project will ultimately violate the law. We are considering all options and expect the outcome will be determined in the courts. If the company breaks ground on the project, citizens along the entire route are prepared to watchdog every action, along every mile, every day of construction and afterward, and compel agencies to act when violations inevitably occur.

Next week, the board will be presented with an equally deficient permit for the proposed Atlantic Coast Pipeline, and should exercise its full authority to reject the permit.”

Roberta Bondurant, steering council of Protect Our Water, Heritage, Rights, a coalition of grassroots groups along the route of the proposed Mountain Valley Pipeline:

“The board failed in declining to exercise its authority of review and supervision in pumping the brakes on this process, so as to allow ample time to gather more information on which to make a decision. The board’s inquiries today highlight the massive chasm of information and understanding lacking in its review process — which reaffirmed the imperative to deny the project or opt for further inquiry. Grave concerns persist regarding water sources and geography implicated by proposed construction, of the proper use, benefit and details of water monitoring programs, and of the shocking lack of financial protection and bonding options for communities and individuals in this proposed project.

“The people of Virginia will continue to fight what amounts to a huge experiment of industrial development and the impacts on land, water and people. No doubt the challenge to natural gas in Virginia is a marathon–there are other permits, legal challenges — a multitude of hurdles ahead for the MVP. For our great places, our clean water, our children and for generations after them — we will carry on.”