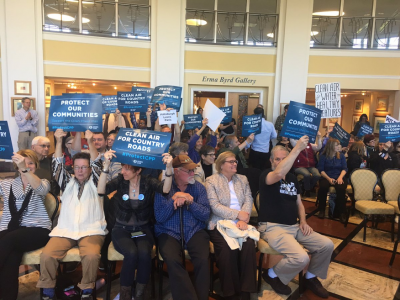 Attendees at the Sierra Club’s Hearing for Healthy Communities on Tuesday told the EPA why our country needs the Clean Power Plan. Photo Courtesy of The Sierra Club

Scott Pruitt has been trying to get rid of the Obama administration’s Clean Power Plan even before he was head of the U.S. Environmental Protection Agency. And in October, he unveiled his proposed repeal, telling a crowd of eastern Kentucky coal miners that the Clean Power Plan “was not about regulating to make things regular. It was about regulating to pick winners and losers.”

But by repealing the plan and his management of the EPA in general, what is Pruitt doing if not favoring fossil fuels over renewables?

For the proposed repeal, it seems a cornerstone of his strategy is to make sure the public has as little voice as possible in the process. While the Obama administration held 11 public listening sessions and four public hearings nationwide before finalizing the Clean Power Plan in 2015, Pruitt has scheduled only one public hearing for its proposed repeal.

Tell Trump’s climate-denying EPA that America is tired of relying on dirty energy.

The lone hearing, which was held from Nov. 28 to 29 in Charleston, W.Va., attracted environmental advocates and coal barons alike.

But Murray conveniently left out that most of the downturn in the coal industry is due to economics and competition from natural gas.

Jeremy Richardson with the Union of Concerned Scientists stated that “coal mining jobs have been declining since the middle of the last century because of mechanization, the shift to cheaper, large-scale surface mining operations out West, and geologic realities that have led to declining productivity in Appalachian coal mines. It is easy to blame the policies of the last president for all of coal’s problems, but it simply isn’t true.”

The Clean Power Plan was projected in 2015 to reduce carbon pollution from the power sector 32 percent below 2005 levels by 2030.

At one of the EPA’s original hearings for the plan in 2014, retired coal miner Stanley Sturgill, now 72, gave some of the most moving testimony. According to HuffPost, Sturgill, who was diagnosed with black lung disease after more than four decades of working the mines told the EPA, “We’re dying, we’re literally dying for you to help us.”

At this week’s hearing, Sturgill spoke up again.

“Now to be realistic, do I really think that the administration cares what this old worn coal miner has to say?” said Sturgill. “I really doubt it. But I had to be here, and as long as I can draw a breath, I’m going to keep working to fight climate change and protect the land and country I love.”

Near the EPA’s hearing, the Sierra Club helped the agency do their job by accommodating more voices at the Hearing for Healthy Communities to collect additional comments to send to the EPA.

“People came out today to the Hearing for Healthy Communities in order to say to the EPA that the Clean Power Plan is pro-worker and pro-environment,” Sierra Club Senior Organizing Representative Bill Price wrote in an email. “Scott Pruitt lies when he says we can’t have jobs and a clean environment. The People know better.”

The Alliance for Appalachia, a coalition of nonprofits including Appalachian Voices, released a statement on the proposed repeal of the Clean Power Plan.

“Although the economy of the region has been heavily dependent on the mining and burning of coal, we have seen the toll that these industries have taken on the health and well-being of the land and people who live here,” the statement reads. “The Clean Power Plan contained the promise of new alternative sources of energy production that would benefit the environment and provide for lower energy bills for our people.”

The EPA is accepting public comments on the proposed repeal until Jan. 16, 2018. Tell Scott Pruitt that the Clean Power Plan is needed to protect our communities from the effects of climate change and air pollution.

For more about the Trump Administration’s attempts to boost the coal industry while ignoring climate science, read this post from earlier this month.