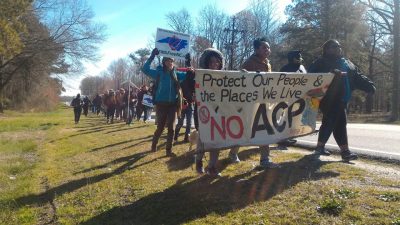 North Carolinians walked the N.C. route of the proposed Atlantic Coast Pipeline in 2017 to protest the project

VIRGINIA – Late yesterday, North Carolina Gov. Roy Cooper’s administration delayed until mid-December its decision on whether to permit the controversial Atlantic Coast Pipeline project, requesting additional information on its potential impact on more than 300 nearby waterways. This action follows on the heels of a move by West Virginia state regulators on Wednesday to rescind their approved permit for a similar pipeline, the Mountain Valley Pipeline.

“We applaud North Carolina Governor Cooper’s move to delay a decision on the Atlantic Coast Pipeline to ensure his state is properly analyzing the tremendous harm this pipeline would have on his citizens’ water quality. Because this pipeline is scheduled to run through Virginia as well, we call on Governor Terry McAuliffe to take note and insist on this level of scrutiny in Virginia’s consideration of the Atlantic Coast Pipeline.

“These proposed pipelines would cross many of our state’s pristine watersheds, rivers, streams, springs, and wetlands – bringing significant risks to the quality and safety of our water supply. It’s essential to the safety and health of Virginians, as well as to the farming and other local industries, that these risks are thoroughly assessed, including the high potential for blasting, erosion, and soil erosion during the pipeline’s construction. We hope Gov. Cooper’s decision inspires Gov. McAuliffe to make sure Virginia fulfills its responsibility under the federal Clean Water Act to avoid risks to the waters of the Commonwealth.”

“While Gov. Cooper’s decision relates to a different energy company than the developers of the Mountain Valley Pipeline, the pending state permit in question in Virginia is equally bad and possibly worse than what’s being considering in North Carolina. Two days ago, regulators in West Virginia rescinded their approval of the Mountain Valley Pipeline under the federal Clean Water Act. They saw that they did not have adequate information and a full understanding of the impact this pipeline would have on water quality. We are just as in the dark in Virginia. We cannot jeopardize the health and safety of the people of Virginia, and we urge Gov. McAuliffe to re-assess his stance on this and demand the time to fully consider what’s at stake.”