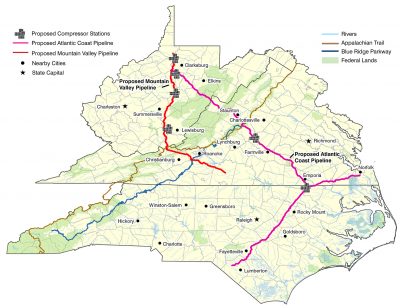 This summer, the Federal Regulatory Energy Commission issued its final environmental review for both the Mountain Valley and the Atlantic Coast pipelines.

These assessments are intended to accurately evaluate the environmental risk the two projects would entail and respond to public concerns about the draft version issued in 2016. But community and environmental groups, including Appalachian Voices, the publisher of this paper, stated that the agency “utterly fails to independently assess whether the project is even needed,” and instead relies on the pipeline companies’ claim that the projects are necessary.

An April 2016 study by the Institute of Energy Economics and Financial Analysis found that natural gas pipelines out of the Marcellus and Utica shale are being overbuilt and that FERC is contributing to the overbuild by granting high rates of return to pipeline companies.

The groups also criticized FERC for overlooking the harm the pipelines would do to the water resources, forests, agricultural lands and wildlife along their routes.
“The Mountain Valley Pipeline will devalue our land, limit its uses and reduce taxes which support our schools and public services,” Maury Johnson, an affected landowner in Monroe County, W.Va., said in a statement. “It will impact the water that we so much depend upon for our families, our farms and our communities.”

“It should be criminal to attempt such a pipeline when the profound environmental damage has not been adequately assessed,” he added.

The U.S. Forest Service is reviewing its plans for the three national forests that the two proposed pipelines would cross. The agency issued its draft decision for the Jefferson National Forest on June 23, which would allow the Mountain Valley Pipeline to cross the forest if approved. Public comments for this plan closed on Aug. 7.

On July 21, the USFS issued its draft decision for the George Washington and Monongahela national forests, which would allow the Atlantic Coast Pipeline to cut through these territories. Comments can be submitted until Sept. 5.

Following a review of any filed objections, the USFS will decide whether to issue a special use permit, pending FERC approval of the pipelines.

Before the companies behind either pipeline can begin construction, each state along the routes must issue water permits required by Section 401 of the federal Clean Water Act.

In March, the West Virginia Dept. of Environmental Protection issued its 401 Water Quality Certification for the Mountain Valley Pipeline. Five environmental groups — including Appalachian Voices — have asked a federal appeals court to overturn this approval. 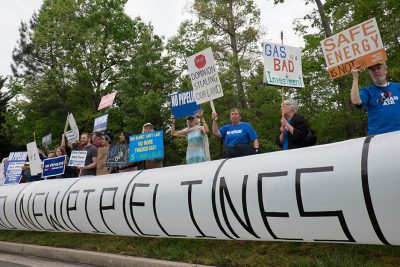 Public hearings for the certification were held in late July and early August for the Atlantic Coast Pipeline in West Virginia, Virginia and North Carolina and in Virginia for the Mountain Valley Pipeline. Written comments to the WVDEP were due by Aug. 4. In North Carolina, written comments must be submitted to the state’s environmental agency by Aug.19, and in Virginia, comments are due by Aug. 22.

“It’s definitely not a done deal, even though they’re presenting it like it is. It falls upon us as citizens to make people understand that it’s not something that’s set in stone,” Jorden Revels, a college student and Appalachian Voices intern told ThinkProgress. Revels is a Native American student at the University of North Carolina at Pembroke in Robeson County, N.C., where the Atlantic Coast Pipeline’s proposed route would cross Lumbee tribal lands.

Construction of the Constitution Pipeline, which would stretch from Pennsylvania to New York, was blocked in April 2016 when the New York Dept. of Environmental Conservation denied the pipeline company’s petition for a 401 water quality permit. Constitution Pipeline Company, LLC, is appealing this decision.

Lewis Freeman, the chair and executive director of the Alleghany-Blue Ridge Alliance, a coalition of 51 organizations working to stop the Atlantic Coast Pipeline, questions the speed with which the bureaucratic hurdles are being cleared.

“What we’re faced with here is misguided inertia,” he says. “Once they discovered all these deposits of gas, there is this inertia that has been created. ‘Oh, we must get it out, and we must use it,’ without thinking longer term: How long will we use it, and are there other energy sources that might replace it?”

A second legal challenge against the Mountain Valley Pipeline has been filed in U.S. District Court in Roanoke, Va. Citizens from Virginia and West Virginia contend that if FERC were to approve the pipeline, it would violate their Fifth Amendment rights under the U.S. Constitution, which requires that private lands only be taken “for public use” and with “just compensation.”

Before leaving for its August recess, the U.S. Senate confirmed two of President Trump’s nominees for FERC, restoring the quorum lost in February when one of the commissioners stepped down.
FERC is expected to make its final decision about the Mountain Valley Pipeline on Sept. 21 and about the Atlantic Coast Pipeline on Oct. 19.

For more information on the 401 hearings, including how to submit comments, visit appvoices.org/fracking/actions. Read about construction problems with two other Eastern pipelines on page 20.