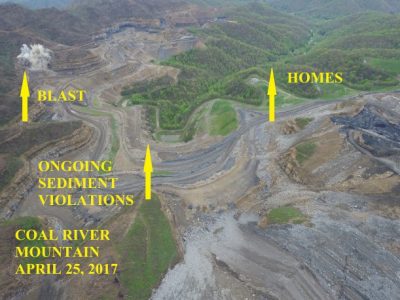 Aerial view of a portion of the Middle Ridge permit in W. Va., taken in April 2017.(Courtesy of Coal River Mountain Watch)

The West Virginia-based citizens group Coal River Mountain Watch has been leading the fight against mountaintop removal mining on Coal River Mountain for almost two decades. They’re still at it today, as coal companies continue to mine and seek new permits.

Despite the bankruptcy of Alpha Natural Resources in 2015 and the declining demand for coal, Alpha’s subsidiary, Republic Energy, is actively mining several areas of the mountain and seeking additional permits to mine.

Republic’s mine complex in Raleigh County consists of six permit areas, some of which have been granted for years and others that have just been issued or are still pending approval. If all permits are issued, the mine will cover roughly 4,690 acres — more than 6.5 square miles.

Coal River Mountain Watch works to protect the mountain and its communities and watersheds. As mining activity has increased on the mountain, CRMW has brought in other groups and volunteers, including the Kanawha Forest Coalition and Appalachian Voices. The collaboration adds capacity in a situation where gathering information can be difficult. Together, we are working to track and oppose the progress of pending permits and monitoring the impacts of existing and active mining.

The Middle Ridge permit (permit number S301712) was issued in 2014. This site is currently being mined and has been riddled with environmental problems. The state Department of Environmental Protection (DEP) has issued seven notices of violations in the past year. Vigilant citizens have brought many of these issues to the attention of state regulators, identifying areas along the mine perimeter where poor engineering has led to erosion and landslides outside the mine. While these problems may seem isolated and minor at first, they indicate ongoing issues that could pose real physical threats to the neighborhoods below the mine in the form of air pollution, water pollution, landslides or blasting debris.

The Eagle 2 permit (permit number S302805) was first issued in 2008, but as of this writing, mining has not started. According to the Surface Mining Control and Reclamation Act, “a permit shall terminate if the permittee has not commenced the surface coal mining operations covered by such permit within three years of the issuance of the permit.” The law does give state regulators some authority to grant extensions for extenuating circumstances. In the case of Eagle 2, the DEP retroactively extended this permit, with no public explanation for the extension.

Coal River Mountain Watch is currently challenging the extension of this permit with the help of the Georgetown Law School Institute for Public Representation.

The case is being reviewed by the federal Office of Surface Mining Reclamation and Enforcement (OSMRE). Several groups in Alaska successfully challenged a mining company’s permits based on the same claim, with courts throwing out several permits owned by Usibelli Coal Mine, Inc.

The Collins Fork permit (number S300208) was issued in 2011. Mining at this site is active and has been accelerating this year, right up to the boundary adjoining the Eagle 2 permit.

Citizens groups recently challenged the issuance of the Long Ridge permit (S300115). Coal River Mountain Watch attempted to appeal the DEP’s decision to issue the permit, due to concerns about the health impacts of mountaintop removal and Republic Energy’s history of violations at nearby mines.

However, the West Virginia Surface Mine Board chose not to consider the appeal because of ambiguity of the filing deadline. Such issues are not uncommon for citizens’ groups and individual citizens, as information about permitting decisions is often difficult and time-consuming to track accurately. In this case, discrepancies between the date of online filing, which is not readily available to the public, and the date of certified hardcopy mailing led to the late filing of the appeal. Coal River Mountain Watch filed the appeal by the deadline given to them by the DEP permitting manager. The mining board’s ruling casts doubt on the public’s ability to gather credible and legally binding information from DEP staff.

The Center Contour permit (permit number S300316) is the most recent permit for which Republic has applied. The DEP held a public informal conference on the issuance of this permit in July 2016, and the DEP was required by law to make a final decision on the permit within 60 days. At this point, the permit has not been issued and the application has been submitted several times following requests from the DEP for corrections.

The application for the Eagle South permit has not been filed, yet. It appeared in the Protection Enhancement Plan for threatened and endangered bat species in the Center Contour application. It would consist of more than 1,000 acres adjoining the Center Contour permit and reaching into neighborhoods of the Rock Creek community.

Though considerable mining has occurred on the Middle Ridge permit, the disturbances that have occurred cover less than half of the total area that could be devastated if the entire mine complex moves forward. We are hopeful that the ongoing nature of the violations seen on the Middle Ridge permit will lead the DEP to take significant corrective action against Republic Energy and reconsider issuing additional permits for this mine. Local community groups like Coal River Mountain Watch and Kanawha Forest Coalition are critical to protecting communities living near mountaintop removal mines. Appalachian Voices and local groups across Central Appalachia continue to monitor the activity on active mines in the region, and track the pending permits and other developments.