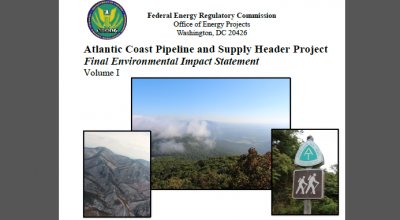 The Trump administration’s final environmental report issued today for the Atlantic Coast Pipeline, which would carry fracked-gas through West Virginia, Virginia and North Carolina, utterly fails to independently assess whether the project is even needed. This is the core issue upon which all other considerations of the controversial project are based, says a coalition of community groups and legal and technical experts.

The Federal Energy Regulatory Commission relies solely on the project developer’s claims of need for the 600-mile, $5.2 billion pipeline, which would yield substantial profit for Dominion Energy and the other private companies behind the project, while the public would be saddled with the financial, environmental and health risks.

“FERC’s action is an affront to American democracy, ignoring the thousands of citizens who participated in the public comment process and handing over the private property rights of hundreds of families to corporate interests. As landowners and business leaders, as ratepayers and conservationists, as parents and grandparents, we insist that the state agencies serve the public trust and rigorously examine the impacts of this pipeline in full view of the public,” says Lew Freeman, a Highland County resident and executive director of the Allegheny-Blue Ridge Alliance. The coalition comprises 52 local community groups and other organizations in Virginia and West Virginia.

FERC has authority to grant the power of eminent domain for interstate projects, but by law must first determine that the projects serve the public interest. The agency’s Final Environmental Impact Statement for the Atlantic Coast Pipeline fails to do so, says the alliance, whose member groups represent thousands of citizens, including hundreds of families along the pipeline route who are facing the taking of their land against their will.

The alliance points to numerous studies in recent years showing that the gas and utility sector is overbuilding natural gas infrastructure and that electricity demand is projected to grow much less than the pipeline developer’s inflated projections. These analyses are ignored in the impact statement.

The coalition also condemns the agency for glossing over the profound and permanent harm to water resources and drinking water supplies, forest ecosystems, wildlife and endangered species habitat, historic sites, agricultural resources, public lands including the Appalachian Trail and Blue Ridge Parkway, and local economies. The pipeline would also significantly worsen climate change impacts in the region due to the greenhouse gas emissions of drilling, producing, transporting and burning natural gas.

“Regardless of FERC’s decision, the Atlantic Coast Pipeline is not a done deal. Far from it,” says Freeman. “State leaders in Virginia, West Virginia and North Carolina will soon decide whether to grant water quality permits for the project. We call upon each state to give this project the environmental scrutiny it requires, and that they are obligated to do.”

A significant red flag for the coalition is FERC’s reliance on Dominion’s pledges to mitigate harm to water resources rather than requiring the company to provide upfront detailed plans to be shared with the public prior to granting federal certification and the power of eminent domain. The coalition has repeatedly expressed concerns that the standard control measures are insufficient to protect water resources given the scale of the pipeline proposal and the steep and highly erodible mountainsides that must be excavated during construction.

Coalition members are now concerned that state environmental agencies are similarly planning to approve the Atlantic Coast Pipeline before there is a thorough and public vetting of detailed water pollution prevention plans.

In Virginia, in particular, the Department of Environmental Quality has stated it will review those plans (stormwater management and erosion and sediment control plans) separately from its review under the Clean Water Act Section 401. As a result, the State Water Control Board’s decision whether to certify that construction of the Atlantic Coast Pipeline will not harm state waters will not be informed by the essential details that the erosion and runoff control plans should provide.

********
The Allegheny Blue-Ridge Alliance is a coalition of 52 organizations in Virginia and West Virginia, founded in September 2014, that opposes the proposed Atlantic Coast Pipeline because of the ecological and economic harm it would cause the affected region, communities and landowners. www.abralliance.org