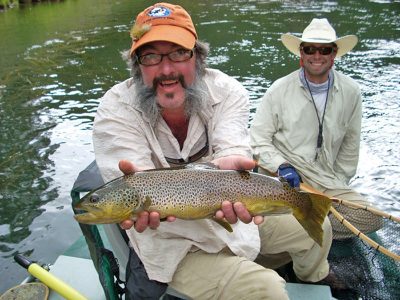 Larry Keel says this 10-pound brown trout is the prettiest brown he’s ever caught. He reeled in this specimen along Idaho’s Snake River with guide Travis Rydberg.


Held in idyllic settings at waterfront locations like Goose Lake in Georgia and on the Elk River in West Virginia, these one-of-a-kind affairs feature a slew of acclaimed bluegrass musicians and master anglers — including, but not limited to, Keel, Steve McMurry, Jeff Mosier, David Blackmon, Gove Scrivenor, and award-winning bass fisherman and banjoist, Will Lee. The events provide participants with a long weekend of instruction in both the fine art of bluegrass music and freshwater bass or trout fishing.

“We wanted an atmosphere that would lead to a real intimate and laid-back experience,” says Larry Keel, who is 48 years old and lives in Lexington, Va. “Music-wise we have workshops, Q&A forums, nightly shows, constant jam-sessions and tons of hands-on instruction.”

Meanwhile, out by the water, there are seminars on fishing techniques — how to tie flies, what kind of bait to use, how to understand various fish habitats and so on. With campers typically numbering under 50 and concert-goers around 100, the events are designed to create close interactions between participants and staff.

Keel has 15 original albums under his belt and has shared the stage with greats like Tony Rice, Vassar Clements, Sam Bush, the Yonder Mountain String Band, Keller Williams, Del McCoury, the Infamous Stringdusters and New Grass Revival co-founder Curtis Burch. What led the legendary flat-picker to invest the time and energy into helping put on small-scale events that have as much to do with fishing as music? For Larry Keel, the activities are inextricably interwoven — his family was rooted in Southwest Virginia for generations and he was raised in an environment strongly influenced by mountain culture.

“Fishing is a total Zen experience, it always calms and centers me,” he says, adding that, while he loves all forms of fishing, he has a special passion for Appalachia’s native brook trout and prefers the catch-and-release experience.

“Like music, it’s spiritual, it’s metaphysical, and I can’t live without it … I try to fish everywhere I go, because, for me, being on the water is a main source of power — like, spiritual power. I try to gather that power to be used when needed through the course of living and creating.” 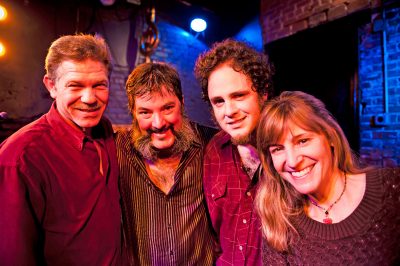 Growing up in rural Fauquier County, Va., this relationship between music and angling was established early on. “There were three ponds just steps away from our house, so I fished every day of the summer from a really early age, just because it was so convenient and close and safe,” he says. “Mom didn’t mind a bit: I caught fish all the time and we ate what I brought home!”

Then, for his seventh birthday, Larry’s older brother, Gary, gave him a guitar. Encouraged by Gary and his father — both of whom played guitar, with the latter also playing banjo — to join bluegrass picking sessions, Larry got hooked quick. “I burned to learn how to play like them and excel on my instrument, I couldn’t put it down,” he says. From that moment on, pickin’ and fishin’ became the two constants in his life.

That is, until he met his wife Jenny.

Married for 21 years, with Jenny Keel playing bass in almost all of Larry’s touring groups, the Keels joke they’ve been joined at the hip since they began dating in the mid-90s. “I’m not exaggerating when I say that Larry and I have wanted to do everything together since the minute we hooked up,” says Jenny.

“Although I’d never fished before I met him, I was eager to try it,” she says. “He showed me how to put the lure on the line and cast and was with me when I caught my first fish—a little rock bass on the Maury River, in Rockbridge County, Va. Fishing with Larry feels like all the things we do together, it’s just wonderful to share the experience with my best friend.”

Over the course of the past two decades, the couple has fished together in a variety of settings throughout the country and beyond. “I try to fish everywhere I go, especially when there’s a special spot I want to check out, or when time allows in the middle of a touring schedule,” says Larry. “But we also make time to go on purely pleasure-based fishing trips that aren’t associated at all with music or touring.”

Along with recent forays in Mexico and Hawaii, some of his favorite outings were on the Chilkoot River near Haines, Alaska, and on Idaho’s Salmon and Snake rivers. Closer to home, he loves to fish the upper James River, the Maury River and, in North Carolina, a favorite is the French Broad.

However, the guitarist counts the Outer Banks of North Carolina as his go-to haven. “Unless there’s a hurricane or a crazy storm hitting the area, I find it really serene and mystical there,” he says. “But really, I have to say that every time I fish, no matter where I am, it’s a special and soul-enriching experience.”

On the road, the Keels say they frequently view the sport as a relaxing social event. Indeed, on top of meeting great locals and fisherfolk, Keel says he’s gotten every band member he’s played with over the last 15 years onto the water and has been known to write or play music while sitting in a johnboat on a quiet lake.

Keel likes to recall a particular misadventure with mandolinist Mark Schimick and Leftover Salmon’s current banjo player, Andy Thorn. Along with Jenny, the three were playing a music festival in southern Florida under the banner of Keel’s longtime band, Natural Bridge, and had paused to enjoy an afternoon of fishing on a nearby lake. Situated in a small johnboat, they glided through the water with Keel playing captain, Thorn at the bow and Schimick in the middle.

“Andy was particularly excited about the fishing, and we were all reeling in some beauties,” Keel recounts with an ominous chuckle. “He kept casting pretty wildly, back-casting a little too long and a little too powerfully to be in such close quarters with two other anglers in a little boat. Well, one of those back-casts landed smack in the back of my head, just below the band of my hat.” When Thorn went to follow-through with the cast, the hook set.

“He was using a huge treble-hook-style lure with nasty barbs and it dug deep into the back of my head. Now, you can’t just pull those things out; the hooks are designed to grab hold of the inside of whatever they attach to. They were totally embedded in my scalp, almost to the bone!”

To the local urgent care the band went, where, after a minor surgical procedure and a tetanus shot, the doctor handed Keel a specimen jar housing the lure. “I gave it to Andy as a souvenir and a reminder to check his wild casting when in a boat with other people,” Keel laughs. “It’s funny because, when I was visiting him a couple of months back in Boulder, Colo., I saw he still has the jar—it’s on display in his music room!” 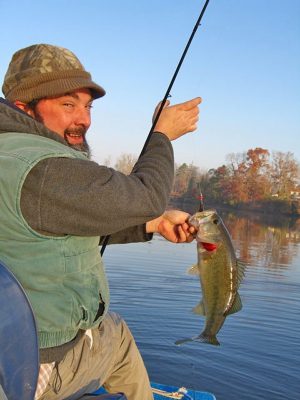 In addition to viewing fishing as a conduit to recharge their creative energies and a means of bonding with friends, the Keels say angling is a perfect excuse to connect with the natural world. In the past, talking to them about nature and fishing elicited quiet musings punctuated by heavy doses of laughter, some penchant tall tales, and a healthy dose of mysticism thrown in for good measure. However, faced with a Trump administration that they feel is bent on the eradication of environmental protection standards for waterways and just about everything else, the connection is something they feel obligated to emphasize.

“I’m for nature first, since mankind can’t really do without it here on planet Earth,” says Keel. “It’s just common sense that we need to pay close attention to our natural world, take care of it, be stewards of it instead of just reckless users. Then it will continue to provide good stuff for us. You know, inconsequential things like clean air and water! It’s just common sense that we have an intrinsic relationship with our natural world — like a family member, it’s something that takes care of you and out of love and respect you take care of it back.”

This summer, from Aug. 31 to Sept. 5, Larry and Jenny will again be publicly celebrating the relationship between music, fishing, creativity and the environment by headlining another pickin’ n’ fishin’ festival in Idaho, “Pickin’ on the Middle Fork.” As the name suggests, the event will be held on the Middle Fork of the Salmon River in a national park wilderness area, which is known for its excellent fly-fishing.

Until then, with Larry currently working on writing material for his sixteenth studio album, there will be many a day spent fishing. “The music I’m writing right now is sophisticated and experimental, playful, dark, exhilarating,” he says.

“But I can’t ever get too far away from my own Appalachian roots. It’s in my personality… I was born here in Virginia and all my closest family are still here, so it’s natural for me to stay near to what’s always been special and meaningful to me. Jenny and I continue to live in this area because it just calls to us. Of all the places in our travels, the Blue Ridge Mountains are the most purely spiritual, magical and inspiring to our hearts. Being here always soothes us and restores us when we’re road-weary.”