The Lure of Appalachian Trout

A bass fisherman explores the conservation and sport behind trout fishing 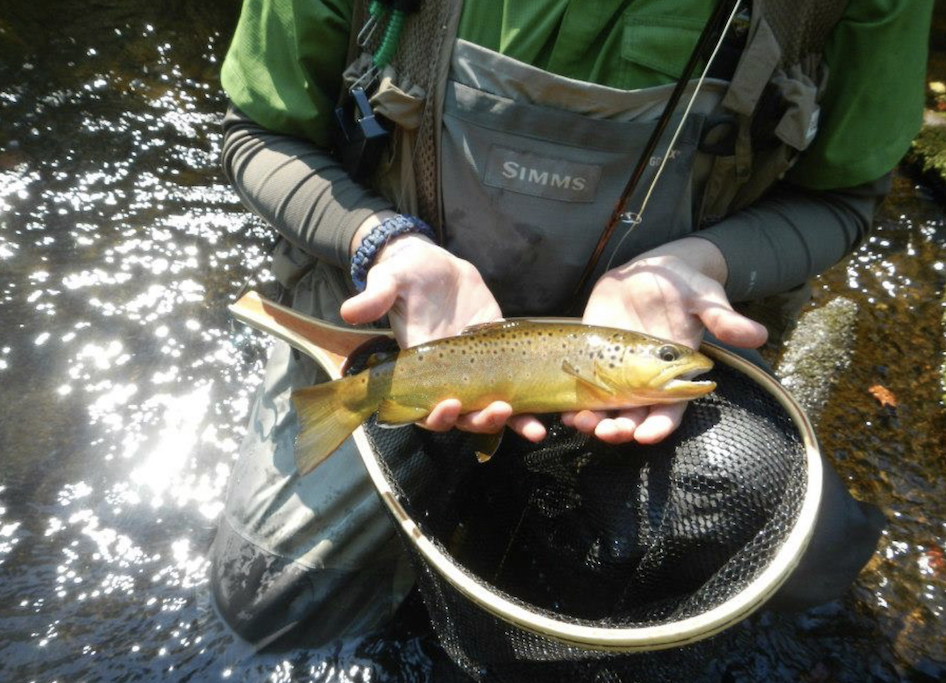 Growing up in the Appalachian Mountains, it’s impossible not to feel connected with the beautiful lands and waters that make them so unique. For me, that connection is found on the water. Not in the adrenaline-inducing rapids, nor in tubes floating down flat waters. Like many others, my fascination with the water is thanks to its fantastic fishing opportunities.

This is what I grew up doing — scouring the wooded lake shores and rocky river bends, seeking that next battle with the majestic creatures just beneath the water’s surface. Despite my preference for bass, it is far from the only game fish in the region. In fact, many waterways throughout the Appalachians offer a one-of-a-kind, breathtaking trout experience.

To learn more about trout fishing in Appalachia, I reached out to Daniel Williams, a fly fishing guide at Clinch Life Outfitters in St. Paul, Va. We sat down together at the local brewery to discuss what makes trout fishing exciting. For him, there isn’t a simple explanation.

“It is a lot of things,” Williams says. “It’s understanding the complex behaviors of animals and the inner workings of the ecosystem and, on a very real level, puzzling out what is going on beneath the water. It is having a brief interaction with a wild animal and leveraging your own knowledge against nature.”

He explains that though wrestling with large, hard-fighting fish is the draw for some, anglers often find themselves in the most gorgeous landscapes in the Appalachians while seeking the perfect place to cast their line. 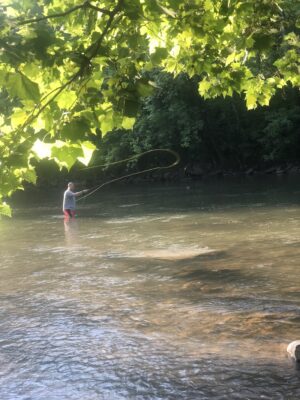 Among other fish, brown, rainbow and brook trout can be found wild throughout the region. Though not all of these species are native, for thrill-seeking anglers like Williams and his clients, they provide additional fishing opportunities.

“If there was a trout to fetishize, it would be the brown trout,” Williams says. “From between 20 to 28 inches they go through such a transformation that they become gnarly. They get this big humped back and hook jaw.”

Thanks to their size and strength potential, the European species is a huge hit with fly fishers nationwide.

“From a tourism perspective, it’s brown trout that draw the most people,” says Williams. “The South Fork of the Holston River produces unbelievable numbers, whether that be the size or volume of fish.”

In fact, the Virginia state record brown trout was pulled from these waters. At 14.75 pounds, it was nearly the weight of a full-size bowling ball.

Rainbow trout, another non-native species, originated in Pacific drainages along the Western United States and parts of Asia and Russia. These powerful, flashy fish often find themselves leaping into the air during their high-energy bouts with anglers. For the casual fisher, rainbows are the most likely targets because they are preferred by the states’ put-and-take programs, which stock trout in designated waters for the sole purpose of harvesting.

“There are a ton of people in Appalachia that take advantage of the put-and-take of rainbows,” Williams says. “It’s not talked about much, but hunting and fishing for retirees or disabled people can be a significant portion of their protein sources during the wintertime.”

Though not technically a trout, rather a trout-like charr, brook trout are Appalachia’s only native salmonid and present an appeal all their own. Williams lightheartedly claims, “some people are willing to climb mountains and stand on their head or on one knee to catch an 8- or 6-inch fish because they are so beautiful and native to the area.”

But don’t be fooled by their small size.

“A wild brook trout in nature can be one of the most voracious fish I have ever seen,” Williams says. “In Grayson Highlands State Park, a trout will hit a fly three or four times in a row in a matter of seconds. When you get them fired up, they are really fun.”

The love for this native fish is so strong that brook trout, including the Southern Appalachian brook and West Virginia Golden brook, are the state fish in six Appalachian states. 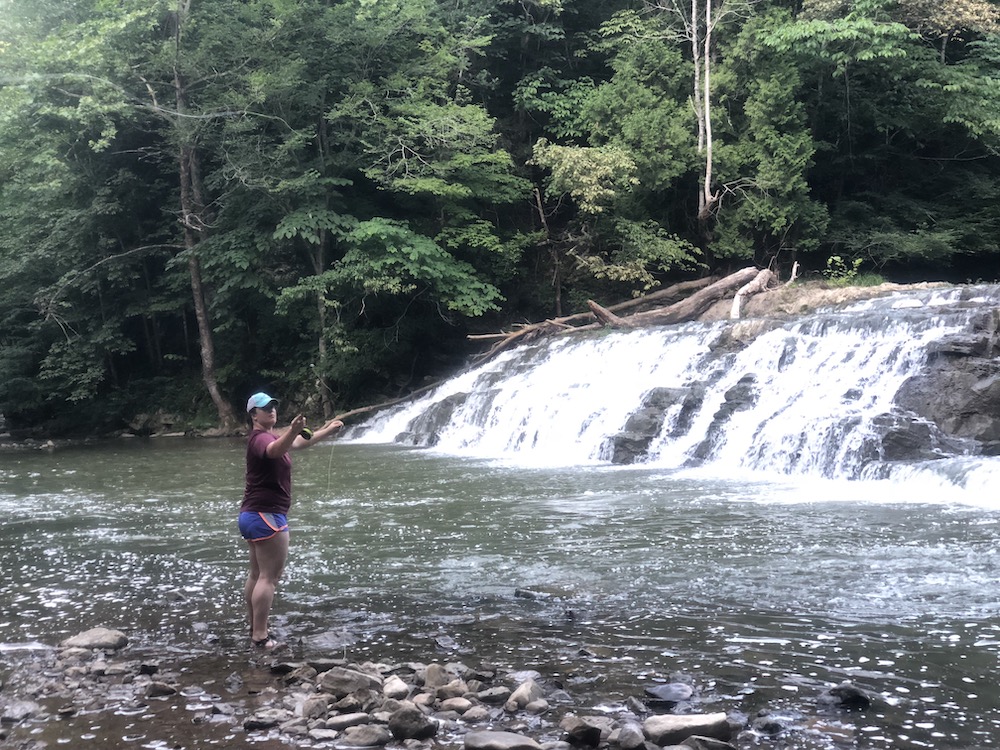 A woman casts a fly line near the town of Lebanon in Russell County, Va. Photo courtesy of Clinch Life Outfitters

I really enjoyed my conversation with Williams, and the local beer, but trout fishing is about more than just catching. To get a hold on conservation efforts in Appalachia, I met with Stephen Owens, a fisheries biologist at Virginia’s Department of Game and Inland Fisheries. Region-wide conservation efforts are taking place to preserve Appalachia’s cherished brook trout. This goes as far as protecting species genetics.

Owens explains, “We try to do what we can to reduce impacts to [native trout] populations. We look to keep those genetics pure in the Southern Appalachian brook trout’s streams. We make sure that we are not stocking hatchery brook trout into those streams where there might be some genetic interchange.”

Another concern for the brook trout is competition with non-native trout. In some locations, the introduction of rainbow trout has inadvertently placed brook trout populations in peril. The Great Smoky Mountains National Park reports that rainbow trout have consistently out-competed the brooks, taking over around 75 percent of their native range.

But according to Owens, this is not always the case.

“I don’t think you can make it an across-the-board-statement,” he says. “You have some sites that have had major impacts with predators coming in and limiting the brook trout populations, and some areas where they are working well together.”

Despite the threats brook trout face, the species is widely seen as premier sport fish. To limit the impacts of fishing on brook trout fisheries, as well as wild brown and rainbow trout, many regulations exist to protect prime waters. Regulations on bait use, harvesting size, catch-and-release waters and single-point hook requirements protect the trout by mitigating fishing impacts in healthy or recovering populations.

Trout populations depend on cold, high-quality rivers and mountain streams. Conservation of this habitat is critical to ensure the sustainability of any trout fishery. Owens is most concerned with the effects of human development.

“I think with most of our resources, particularly in our more developed locations, habitat degradation plays a more critical role in limiting our cold-water resources,” he says.

Further degradation can be caused by poor land practices related to agriculture, livestock and forestry, which can increase sedimentation and introduce bacteria, pesticides and herbicides into nearby streams. However, according to Owens, state programs have made a positive difference on these issues. These programs include sharing best management practices with farmers and livestock owners while making sure not to negatively impact their business, and working with forestry operations to avoid logging up to the streambank.

“You look at a lot of our streams, as well as a lot of the areas in the Southern Appalachians, and things have improved quite a bit since the ‘60s and ‘70s,” Owens says. “That doesn’t mean there aren’t some sites that are at risk, but as a whole, I think we are heading in the right direction.”

However, in some parts of the mountain range there is another large contributor to stream degradation — acid mine drainage. This pollution is a product of outflowing water from coal mines and can have many negative impacts on trout populations and habitats. To learn more, I looked to Trout Unlimited, a nonprofit organization that works across the nation to preserve freshwater fish habitat.

In a Trout Unlimited report, Northeast Habitat Program Director Amy Wolfe states, “Abandoned coal mine drainage still renders over 13,000 stream miles nearly lifeless throughout the Appalachian coal region, with the highest concentration of more than 5,500 stream miles found in Pennsylvania. The good news is that we are indeed making progress.”

Trout Unlimited reports warn that these outflows can produce precipitates that clog the gills of fish and other invertebrates. Acid mine drainage can also drop pH levels enough to cause respiratory failure in fish and issues with bodily fluid regulation,while diminishing fish growth rates and reproductive abilities.

To get an idea about how mine drainage is treated, I called Shawn Rummel, Trout Unlimited’s field and research manager in Pennsylvania. To reduce acidity and remove precipitates, Rummel says that usually, “a series of ponds and wetlands are lined with alkaline material, typically limestone. The water goes into the ponds and as it reacts with the limestone, it’s increasing pH.”

This reaction also caused metals, such as aluminum and iron, to precipitate out. After flowing through a series of these man-made wetlands, the stream is ready to re-enter its natural channel.

Treating acid mine drainage is a long and expensive process. On this, Wolfe wrote, “I like to remind folks that in the abandoned mine cleanup world, we celebrate restoration successes in feet. Little by little, one at a time, we celebrate each aquatic insect that returns, and each brook trout that makes its way downstream to the newly restored section of stream to claim its new home.”

Appalachian trout also face the threat of exotic parasitic diseases such as whirling disease, a European disease that’s causing havoc in some Western fisheries. Whirling disease is connected to the lifecycle of a tubifex worm that hosts the disease-causing parasites. With its presence in multiple Appalachian states, I asked Owens to clear up the waters on whirling disease in Southwest Virginia.

“We have not documented any clinical signs of whirling disease in any of our wild trout populations,” he says. “In recent years, we have been evaluating the health of wild trout populations at some of our more popular streams and we plan to continue additional testing at other waters on an annual basis.”

Owens explains that the habitat out West is much more conducive to the disease than Appalachian streams. Still, wildlife officials have found the parasite and the disease itself across the region in some rivers, including in Western North Carolina and East Tennessee. So far, it has been shown to have minimal effect on Appalachian trout populations. In 2018, the Tennessee Wildlife Resource Agency Trout Biologist Sally Petre reported, “so far, there has been no indication of negative impacts of whirling disease in the South Holston and Watauga tailwater trout populations.”

The largest concern from the presence of the disease in several waterways is the transmission to more susceptible wild trout populations.The parasites can survive unseen on fishing apparel, which is another reason anglers should routinely clean and dry their fishing equipment. Additionally, Owens assures me that states are careful to ensure that the disease is not being actively introduced into local waters through trout stocking.

I’m still a bass fisherman at heart, but delving into the front lines of trout fishing and conservation drove home that fishing is not just about catching the biggest or strongest fish — it is about experiencing nature in a truly exceptional way with friends and family. It is preserving trout fisheries by protecting and improving the natural habitats that trout depend upon. It’s about making sure that human presence and activities do not imperil these truly beautiful and wild residents of Appalachia. Perhaps, the true “trophy” trout of the Appalachians is a gorgeous brook, brown, or rainbow trout wild in pristine, silvery creeks or rivers, tucked deep in the mountains, protected and cherished by biologists, nature lovers and anglers alike.