By Elizabeth E. Payne
Throughout an entire summer, Brian Hubbard gathered rocks from the land in Pound, Va., where he planned to plant blueberries.

He estimates he pulled 50 tons of rock out of his land that summer.

Rocky soil that has been compacted with heavy machinery is just one of many challenges facing farmers who want to plant their crops in the reclaimed mine lands of Central Appalachia.

But Hubbard is one of a growing number of farmers who see potential in this land and are willing to put in the effort to rehabilitate the land for planting. Across the region, projects large and small are restoring the landscape and reimagining the future of Appalachia: rethinking how to care for the land, where to find work and how to put food on the table.

A new agricultural project called AppHarvest is set to break ground in Summer 2017, and project planners hope the endeavor initiates a change in where Americans get their produce. 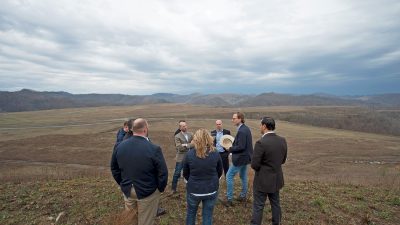 Jonathan Webb of AppHarvest tours a former mine with members of Dalsem, the company designing a greenhouse for the site, and with officials from Pikeville, Ky. Photo c/o AppHarvest

The project would entail constructing a 2 million square-foot greenhouse on 60 acres of reclaimed mined land in Pikeville, Ky., where tomatoes, bell peppers and other produce will be grown using hydroponic techniques. This type of agriculture involves growing plants in nutrient-rich water solutions instead of soil.

AppHarvest Founder and CEO Jonathan Webb has generated funding for the endeavor through traditional bank financing, as well as from private funds and investors. He hopes his project will be the first of many large-scale greenhouses to be built in Central Appalachia.

“We’ve got 1.2 million acres of reclaimed mine land,” Webb says. “We have the acreage. We’ve got [tens of thousands of miners] that’ve been laid off in the coal industry in the past five years. All the dots are lining up on this.”

In addition to growing produce, AppHarvest anticipates creating 140 jobs, mostly in the greenhouse, which Webb describes as a “hub for innovation, sustainability and conservation.”

Webb promises to pay his workers at least $12 to $13 per hour, and thinks his produce will be able to compete with fruits and vegetables coming from Mexico despite the higher labor cost because of his proximity to the market: Pikeville is within a day’s drive of 65 percent of the United States population.

“The ‘America First’ strategy is forcing large entities in this country to rethink, do they want to buy domestically, or do they want to gamble and continue to buy questionable products from outside of our borders. So, for us, it has helped so much.”

Nathan Hall has a big vision too, but he envisions a rebirth of the ecosystems destroyed by mountaintop removal coal mining.

Hall is president of Reclaim Appalachia, a branch of the West Virginia-based Coalfield Development Corporation, a not-for-profit organization focused on jobs training and community building. Together with their partner branch Refresh Appalachia, Hall is overseeing a pilot project in Mingo County, W.Va., that he also hopes can serve as a model for others to follow.

He is working with four former coal miners and a site crew chief who are actively managing eight acres of former mine land. This spring they are planting an orchard of fruits and medicinal herbs well-suited for the poor soils found on the site. Crops include blackberries, raspberries, pawpaws, lavender and echinacea.

Adapting practices he learned while working at the mine reforestation organization Green Forests Work, Hall has arranged for machinery to rip narrow swaths through the compacted, rocky soils, and then for each year-old bare-root seedling to be dipped in a beneficial microorganism mix and then planted with compost in the rocky earth.

Going forward, the group plans to integrate rotational grazing of small livestock that will further nurture the soils.

“The approaches we implement there,” Hall says, “we’ll learn how to do it correctly and work the kinks out, and then have a model we can expand to a larger scale across many different mountaintop removal sites.”

The funding for this pilot project has come from two rounds of federal POWER grants, and Hall says that he’d like to see the project expand to at least 30 acres, with up to 10 full-time employees working on the site. From there the methods they develop could be implemented on even larger sites, both older reclaimed sites and possibly even sites that coal companies have failed to reclaim, with even more jobs created.

“Our goal is to take those pretty undiverse, arrested succession areas, and by doing this ripping and replanting, as well as intensive rotational grazing management, we can convert the species mix to something that’s much more native, much more varied,” Hall says. “So we can create much more ecological niches, we’re generating more organic matter, therefore carbon sequestration. And at the same time, we’re creating profitable business enterprises. There’s a huge amount of land that this would be applicable on.”

On numerous farms across the region, individual farmers, as well as cooperatives, are working to grow specific crops on reclaimed mine lands.

One such undertaking is the Southfork Farm in Pound, Va., which grows blueberries on two acres of reclaimed mine land. Brian Hubbard, who farms the land with his family, is a former coal miner who initially planned to plant apple trees until he discovered that their soil’s pH levels were better suited to blueberries. 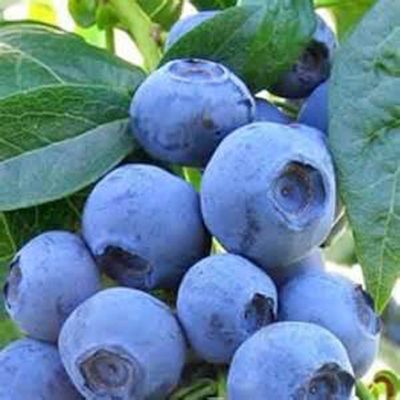 His land was mined in the late ‘70s and early ‘80s, and Hubbard sees advantages to this. First, he has a relatively flat piece of land in the mountains. And second, he says, all those rocks he pulled out that first summer weren’t as large as those found in land reclaimed more recently.

Challenges he’s encountered on the mine land include the invasive and pervasive autumn olive trees, that were planted during reclamation and are now extremely difficult to eradicate, and the inconsistency of the soil.

“The biggest advice I would do is to do plenty of soil tests,” Hubbard says. “Because, especially on something that’s been reclaimed, you might have one type of soil here, and a certain spot a hundred yards away, or two hundred yards away, it might be completely different soil.”

Despite finding few resources available online, Hubbard has developed strategies to manage the three different soil types he has in his blueberry fields, and as his plants reach maturity he says he’s optimistic this will be his most successful season yet.

The farm also grows sorghum for molasses and maple trees for syrup.

The 2014 federal farm bill and legislation in several states has restored a long-abandoned crop as an option for some farmers: industrialized hemp. Once prized for its fibers, the plant was later banned because of its relation to the marijuana plant. 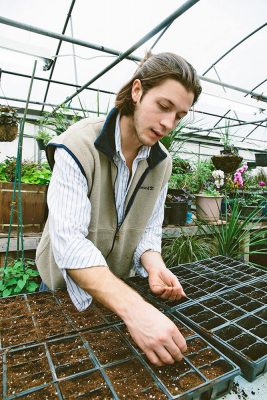 According to J. Morgan Leach, the executive director of the West Virginia Farmers Cooperative, many of his conversations begin by explaining that hemp does not share the intoxicating characteristics of its cousin and cannot be abused. Now, he says that local reaction to growing hemp is broadly positive.

Leach notes the potential value of the plant’s seeds, oils and fiber, each of which has its own market niche as nutritious food additives or as fiber for textiles, paper and other products.

“Our overarching goal is to help diversify the economy and provide some new opportunities to make money in this state, so we don’t have this mass exodus of young folks,” Leach says. “Maybe there’ll be new and exciting jobs within hemp processing, manufacturing, value-added production, retail sales. There’s a lot of auxiliary industry that goes along with it.”

The co-op is also exploring how the plant can grow on reclaimed mine land with a test season being grown this year on Zachary Drennen’s family land.

Drennen is president of Strong Mountain Communities, another branch of Coalfield Development Corporation that focuses on entrepreneurship. He has a background in organic farming and is eager to try planting hemp on three acres this season.

Drennen’s extended family owns about 3,000 acres in Kanawha County, W.Va., much of which has been mined repeatedly since the early 20th century.

His expectations for this year’s crop are modest, but he sees promise over the long term.

“The future of southern West Virginia, I think, is going to be a lot of these small scale industries,” he says. “And I think agriculture being one of them. And hemp, as a crop, is the one showing the most promise right now. Lavender is another one.”

He also sees potential for agricultural projects on family-owned mine land such as his family’s land, and he hopes that successful growing operations can inspire some of these families to lease their land to farmers.

“These families probably are interested in giving back to West Virginia or Appalachia in some way,” Dennen says.
“And they are interested in finding a role in the economic diversification. … I do think that the family-owned corporations and landholding companies, certainly in West Virginia, would be very open and kind of excited about the thought of hemp and lavender and crops like that, and that kind of activity happening on their property.”

Tammy Owens operates a 110-acre farm in Dickenson County, Va., which includes land stripmined in the ‘70s and ‘80s.

“[At] Foxfire Farm, our focus is actually reclaiming this stripmine land, to where it’s thriving, vital soil that can be used in a multi-layered or multi-faceted way, to bring … a truly diverse sustainable income.” 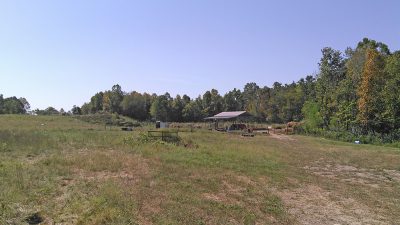 Owens is frustrated by the condition of her land but overflowing with optimism at its potential. While her land was reclaimed according to the law, it is far from healthy. But she believes that it can be healed using organic practices.

Owens’ farm specializes in medicinal plants such as goldenseal and cohosh, and forest farming is a central part of her approach.

Since beginning her operation in 2011, Owens says she can already see improved vitality in her soils through her use of compost, incorporation of sheep and other practices.

“I want this land, this farm with the projects that we’re doing here, just like we did with the organic farm out in Kansas, to become like a model that it’s actually possible,” she says, referring to her experience converting a traditional farm, where chemicals were used and genetically modified crops were grown, into an organic farm. “So, we can do that same thing here, with the stripmined land and bring it back to what the land used to be before the stripmining happened.” 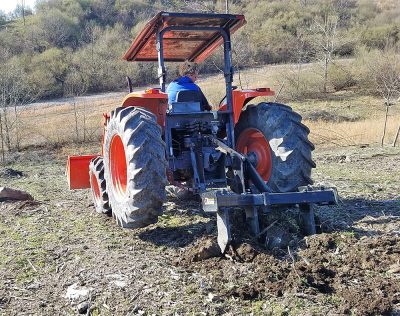 Lola Cline used a tractor to break up compacted soil on a reclaimed mine land site in Mingo County, W.Va. Photo by Nathan Hall

Agriculture, whether on a large or small scale, offers many opportunities for the people of Central Appalachia and for the lands scarred by coal mining, including job opportunities, locally sourced produce and restored ecosystems.

“If we can tell our story about how we sourced locally, how we’re providing jobs for farmers and processors and manufacturing, I think that motivates companies to be more willing to take a look at using our raw materials opposed to what they currently use,” says Leach, referring to the hemp grown by farmers in his co-op.

Owens of Foxfire Farm wants to restore not only the soils but also the culture of Appalachia.

Editor’s Note: AppHarvest’s projected schedule for breaking ground has been revised in the online version of this story.