Kentucky Coal Mine Has Brighter Future as Solar Farm

There’s no denying that the once-lucrative coal industry in Appalachia is now a dying one. Approximately 44 percent of coal mined in the United States comes from companies that have declared bankruptcy over the past few years. Recognizing the changes taking place in the energy market, one coal company has found a way to stay relevant in the energy conversation.

Berkeley Energy Group, in partnership with EDF Renewable Energy, plans to turn a strip mine site just outside of their Pikeville, Ky., headquarters into what could be one of the biggest solar farms this side of the Mississippi. While it’s too early to tell the exact size of the farm or how many jobs it will support, Berkeley Energy estimates their project could produce between 50 and 100 megawatts of solar power, depending on EDF’s geotechnical analysis. Construction could begin by late 2018, once mining ceases on the site. 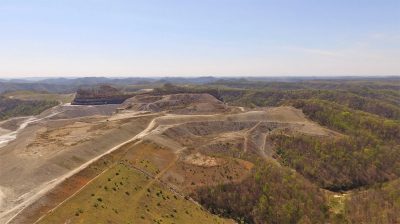 The company that mined this site for coal intends to convert it to a solar farm. Photo by Berkeley Energy

As for the labor force, Berkeley Energy Project Development Executive Ryan Johns highlighted an unusual condition in the project proposal: to hire displaced coal miners in every phase of construction possible.


“This area has been hit probably the hardest in the country from the coal downturn on a per capita basis, and the area is still feeling the results of it,” Johns says. “Seven years ago we were producing 90 million tons out of the Appalachian region, last year we produced 16 million tons. … There’s a lot of fear and anxiety in the area.”

Former Kentucky State Auditor Adam Edelen says he helped his longtime friend Johns come up with and enact the idea for the solar farm by partnering with EDF, an international company with over 30 years experience and 9,000 megawatts of wind, solar, bioenergy and electric storage developments under its belt. Edelen, who now heads Edelen Strategic Ventures, a management consultancy firm in Lexington, Ky., sees the over $100 million dollar project as a win-win situation for the economy and the environment.

“This was two Kentuckians who had a vision for a new approach in terms of job creation in Appalachia, and [who] were able to enlist the support of a global powerhouse in helping make it a reality,” Edelen says. He notes that big companies like Toyota are moving to renewable energy on their own, and states looking to attract those businesses to their area would benefit from being able to provide green energy.

According to Edelen, Kentucky is way behind the curve when it comes to energy; it is one of just 13 states in the nation that does not require or incentivize utilities to purchase renewable energy. This makes it more difficult to sell solar power directly to utilities. Instead, Berkeley Energy will use a utility’s transmission lines to transfer the power generated by their solar panels to a regional grid operator, where it can be purchased by corporations looking to reduce their carbon footprint.

“I think when government fails to lead by example it creates a vacuum,” Edelen says. “I see this as a historic step toward establishing a renewable energy foothold in Appalachia.”

“A small incremental project would be easier to do, but it wouldn’t have the economic or leadership impact that our project will,” Edelen continues. “And we think that when we open the door and walk through it, there will be many who follow our lead.”

“Abandoned and reclaimed strip mines often don’t have much use afterward due to the acidity of the soil and location and all that, so turning a large mountaintop removal strip mine site into a solar farm is an excellent use of land, potentially,” Hough says. “The devil’s in the details in these projects.”

Hough has looked into building a solar farm on a former strip mine site in the past, but he ran into two common problems: the site was too far away from transmission lines and the ground too uneven despite some flattening from the mountaintop removal process.

Berkeley Energy’s site, however, has transmission lines able to handle the load nearby, and their partner EDF determined the land to be flat enough for development. And with Berkeley Energy’s extensive land holdings in Kentucky, Virginia and West Virginia, Johns doesn’t anticipate this to be their last foray into renewable energy if the project turns out to be successful.

Matt Wasson, director of programs for Appalachian Voices, the publisher of this newspaper, is glad to see a coal company diversifying its portfolio. But he also expresses skepticism that this is the best way to bring the solar industry to Appalachia.

“This project is a good thing in general, definitely a good thing for East Kentucky too,” Wasson says. “But it’s not nearly as good as it could be.”

For Wasson, the ideal model is to build a solar industry from the ground up in collaboration with business leaders, nonprofits, universities and community colleges, similar to the organization’s efforts with the Solar Workgroup in Southwest Virginia (read more here). He believes these types of projects will be more beneficial long-term than solar projects run by larger energy companies, which have historically held power in the region.

“If the state developers and local governments were really paying attention on how to build a solar industry for the long term in the region, then there are ways that this could have a much greater economic impact,” Wasson says.

But for Johns and Edelen, this project is a chance to offer hope to a region desperate for jobs and economic diversification.

“It’s not just about our involvement,” Edelen says. “This is about the opportunity for economic transition for a region that desperately needs it.”