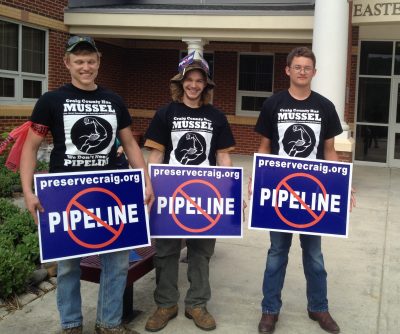 The James River Spinymussel crew of Craig County outside the first of two public hearings on the proposed Mountain Valley Pipeline.

The proposed 300-mile, 42-inch pipeline would cross primarily undeveloped, rural agricultural and forested lands. The project would fragment the heart of one of the largest remaining wild landscapes in the United States, cutting through national forest land and the Appalachian Trail and crossing more than 1,000 streams and wetlands and several major rivers in its path.

The lawsuit filed today in the U.S. Fourth Circuit Court of Appeals seeks to invalidate West Virginia’s water quality certification for the pipeline and require the state to reconsider whether the project can go forward in compliance with the Clean Water Act. The suit was filed by attorneys with the Appalachian Mountain Advocates on behalf of Appalachian Voices, West Virginia Rivers Coalition, Indian Creek Watershed Association, Sierra Club and Chesapeake Climate Action Network.

“State environmental regulators need to start taking their duties seriously,” said Peter Anderson, Virginia Program Manager for Appalachian Voices. “They must rigorously analyze impacts on water, soil and forests, rather than taking the industry view that the permitting process is an annoying bump in the road. These agencies are public health institutions at their heart, so they should act like it.”

“West Virginia communities have already suffered enough as a result of fracking, and building the Mountain Valley Pipeline would lock in decades more of this reckless practice and the environmental destruction that comes with it,” said Deb Self, Senior Campaign Representative for the Sierra Club’s Beyond Dirty Fuels campaign. “This pipeline threatens to do irreparable harm to Appalachia’s treasured streams and forested hillsides, and it is critical that the state thoroughly examine these impacts rather than rubber-stamping a project that is bad for our communities and our environment.”

“The Mountain Valley Pipeline would cut through the middle of Indian Creek watershed, an area of karst and other complex geology,” said Judy Azulay, president of Indian Creek Watershed Association in Monroe County. “If the pipeline destroys our streams, springs, wells and wetlands, it destroys our way of life. We need the federal and state agencies to stand with us to safeguard our water supply.”

“With the MVP proposing to cross streams more than 600 times in West Virginia alone, it’s startling the bar was set so low on information required from the applicant,” said Angie Rosser, Executive Director of the West Virginia Rivers Coalition. “Especially for a project of this magnitude, we expect a lot more detail. Without the complete information and analysis, there’s no way that West Virginians can be assured their rivers and streams won’t pay a price.”