Students speak out against the Atlantic Coast Pipeline: Why collaborative resistance matters

By Cassidy Quillen and Olivia Nelson 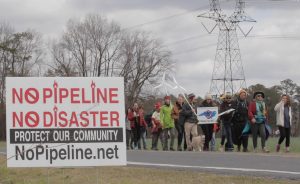 We arrived in the early evening, three days before the Walk to Protect our People and the Places we Live finished. The walkers were circled up, weary yet excited, going over highlights from the day’s route and the breakdown for the evening. That night we were sleeping in a church community center, sleeping bags already lined up on the floor and Seeds of Peace East preparing dinner for the 40 or so people staying that night. Not many people are even sure what day it is or how long they’ve been walking – we found out later most stayed six or more days – but they’re excited about vegan shepherd’s pie and attending the teaching event hosted by the Lumberton community that evening.

On a broad level, Divest Appalachian traveled to Robeson County, N.C., and walked because we know that we need everyone mobilizing in this political movement to halt the Atlantic Coast Pipeline. With President Trump’s push to expedite oil and gas pipelines, and the proposed Atlantic Coast Pipeline listed as a top priority infrastructure project, there is no room for neutrality or complacency. Everyone at the action reflected similar values. The walkers came from across North Carolina, and ranged from students to retirees, united to get the message across that this pipeline is not wanted by the people of North Carolina.

Zooming in a bit more, it’s not hard to recognize that the people who would be impacted most by the Atlantic Coast Pipeline have faced a long history of exploitation by extractive industries: African-Americans, Native Americans and low-income citizens. Lumberton has historically been home to people of color and is considered tribal land to the Lumbee — a Native American tribe not federally recognized, overriding their sovereignty and ability to block the Atlantic Coast Pipeline. To walk for someone else’s rights is to listen to and represent their community’s values, as well as their history. One of the foundations of the walk was getting involved with local organizers such as Mac Legerton, executive director of the Center for Community Action.

Legerton led events that got both the walkers and local people involved in speaking out against the pipeline from a mutual point of understanding. One such event was a community teach-in. A series of speakers, including academics and representatives of the Lumbee American Indian Nation, spoke on how the natural gas will not be used in the counties the pipeline runs through, is not needed to meet demand, and how to stay involved once the walkers went home. We know, as students of sustainability, that the gas that would flow through the Atlantic Coast Pipeline is not needed and would not be coming from North Carolina, nor would it serve those along the route. This teach-in brought valuable information and examples of the dangerous effects of pipelines on the communities they divide. Once we peel back that layer, we are left with racist, profit-driven industry policies that are wholly unacceptable.

Focusing in on western North Carolina highlights Duke Energy’s monopolizing power across the state; the proposed pipeline would cause utility rate hikes statewide. Several of the students who traveled from Boone have families and homes in proximity to the route of the proposed pipeline. As Divest Appalachian and Boone Rising handed out information about the Atlantic Coast Pipeline at Appalachian State University leading up to the walk, we discovered that many students on campus did not even know that the pipeline proposal exists, nor that it would impact their families in a variety of environmental and economic ways. How many people have connections to the land, history and loved ones that live along the proposed pipeline route, yet do not even know what’s coming their way?

Finally, we look at the place Divest Appalachian’s students call home: Appalachian State University. According to the UNCMC 2015 Annual Report, our school system has $236.8 million of assets invested in energy and natural resources — an “asset class comprised of investment managers that purchase oil, natural gas, power, and other commodity-related investments.” What this means is that Appalachian State University and the University of North Carolina school system are actively promoting and profiting off of the struggle and oppression in Standing Rock. It means that our institutions are advancing the move to put communities in eastern North Carolina, Virginia and West Virginia in danger from the Atlantic Coast Pipeline. In the face of a Trump presidency that threatens the stability of life on this planet, there is no room for neutrality in leadership at this university on the issue of climate change.

Divest Appalachian will continue building power on our campus this spring to show our school’s administration that it too can lead alongside universities, colleges and entire cities that have divested from fossil fuel industries and reinvested in solutions to the climate crisis. The Atlantic Coast Pipeline would be on our home soil, and we will not stand for an institution that touts an ideology of sustainability while profiting off industries driving climate change. We do this to protect our water, our air, our soil and our people right now. This pipeline is messy, it’s dangerous and it’s unnecessary. By laying these pipes, our state and our nation are telling us whose lives are more valuable, and who they can afford to lose. Watching extractive industries divide and conquer the communities we call home is not acceptable. From Standing Rock to the Atlantic Coast Pipeline, people are standing up against injustice and destruction, but we need everyone to rise up from the trajectory we’re currently on.

There are many ways to get involved in blocking pipelines; call your elected officials, and learn more about pipelines and development projects in your state. It can even be as easy as finding local organizers to step into your community, such as Divest Appalachian, Boone Rising and Appalachian Voices.