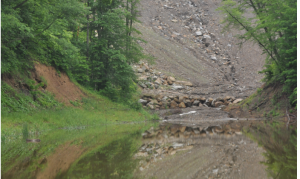 A valley fill beneath a mountaintop removal mine in eastern Kentucky. The Stream Protection Rule would have limited the practice, which has devastated water resources in Central Appalachia.

President Trump is scheduled to sign a resolution today repealing the Stream Protection Rule. The loss of the rule has far-reaching consequences, especially for Central Appalachian streams and communities. A main goal of the rule was to limit the dumping of waste into rivers and streams during mountaintop removal coal mining, a destructive method of surface mining that has devastated water resources in Central Appalachia for decades.

Demand for coal has declined steeply in the United States for nearly a decade — long before the Stream Protection Rule was issued — largely due to competition from natural gas and, more recently, from renewable energy sources. Metallurgical coal prices are also sinking, after a short-lived price spike late last year. Central Appalachian mines have been especially hard hit. Easily and cheaply accessible coal seams are running out after more than 100 years of mining in the region.

“For these reasons, repealing the rule will have extremely little, if any, impact on reviving the coal industry, despite what the president or congressional allies say. By the same token, mountaintop removal mining is still happening in Central Appalachia. This rule would have helped protect water quality and public health in the region,” said Central Appalachian Program Manager Erin Savage.

As coal demand declines, coal-impacted communities are shifting their focus to the development of new economic opportunities. But many members of Congress are not following their constituents’ lead, and instead continue to prioritize corporate coal interests over the needs of the communities they represent.

The bill to repeal the rule was introduced by Representative Bill Johnson (R-OH). A similar resolution was introduced by Senators Mitch McConnell (R-KY) and Shelley Moore Capito (R-WV), both of whom are from states that have had difficulty enforcing already-inadequate mining regulations. Kentucky has a long history of failing to identify or adequately punish Clean Water Act violations by surface mining companies. And in West Virginia, a three-year investigation by the U.S. Department of the Interior recently found the state Department of Environmental Protection had failed to enforce many state mining rules, including those that impact water quality and mine reclamation.

“If Central Appalachian legislators really had the best interests of their constituents at heart, they would not have attacked this moderate rule,” Savage said. “Instead of doing the bidding of coal industry lobbyists, they should be working to protect the health and well-being of Appalachian communities that depend on clean water.”

Multiple studies have established connections between mountaintop removal and negative health impacts for nearby communities. While the Stream Protection Rule did not focus directly on human health impacts, community health would likely have benefited from associated reductions in water pollution and dust under the new rule.

“For all my life, the coal economy has ruled this region and its people,” said Ron Short of Duffield, Va. “Now we are facing the demise of the coal industry, and we must save the valuable natural resources that we have left if we are ever to develop cultural tourism and eco-tourism as important parts of a new economy that works for everyone.”